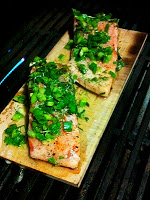 The BBQ is a wonderful thing really – almost everything tastes better, food cooks quickly, and as long as it isn’t raining its a great way to enjoy the beautiful Australian outdoors.

We recently came across maple grilling planks at a BBQ shop. Not knowing much about them, Scotty D thought he would give them a go. It turns out, they are a wonderful way to cook fish on the BBQ. As they heat up and char they cook the food on top and infuse it with a glorious smokey flavour.

To use them you soak in water for an hour (so they don’t catch fire on the BBQ when cooking) then place them on the BBQ to char a little, turn them over and place the food on top then grill until cooked. 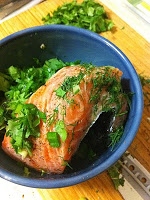 Scotty D decided to cook on Friday night and in usual Scotty D form he was planning something packed full of flavour. Remembering there was a grilling plank in the cupboard he rang from the supermarket and got me to start soaking the board in preparation for a fishy feast.

He returned 30 mins later, bursting through the front door and quickly began deboning and marinating Salmon fillets,  slicing and dicing both zucchini and mushrooms and preparing chilli garlic prawns with aplomb.

With the skill of someone who has been cooking fish for many years more than he has been, he expertly cooked the fish and prawns on the BBQ with the mushrooms and zucchini in the wok burner attached, timed it all to perfection and had it ready to go in no time served with mash and a rocket, spinach and kale salad.

From first bite it was perfection. We looked at each other and smiled… he had done it again. The fish, along with the wonderful smokey flavour, tasted of shallots, coriander, dill and lime and was unbelievably moist. The prawns burst with chilli, garlic and lime and the mushrooms and zucchini were cooked with a lovely white wine. Not only was each element full of flavour, but they complimented each other perfectly. 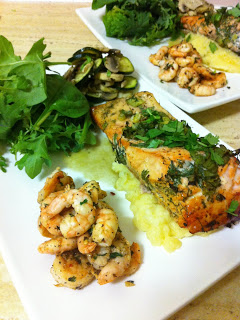