To celebrate both the premiere of Series 3 of Masterchef Australia on 1 May and my lovely friend Tanja over at i (heart) my food appearing in the show, I decided to try a little cooking time trial of my very own!

I had recently bought Scotty the Jamie’s 30-Minute Meals cookbook by Jamie Oliver after we watched a few of the episodes together. In the show, Jamie makes “knocking up” three to four dishes in 30 minutes look effortless so I decided that trying one of the 30-minute meals on the night of the premiere would be a perfect tribute.

The meal from the recipe book I settled on was as follows: Piri Piri chicken, rocket salad, dressed potatoes and Portugese tarts to finish.

I will just start by saying that if you don’t move at the speed of light, and your kitchen is not state of the art (eg. your oven cooks quicker at the back than the front, your cooktop is electric not gas, and you aren’t using the world’s best blender), then from the outset you will realise that 30 minutes is ambitious. Lucky for me, I had all this pegged, so I gave myself a generous 60 minutes before the start of Masterchef to get it all done.

About 20 minutes in, the kitchen was an absolute mess, I had 3 dishes going at once, ingredients all over the place and was screaming for Scotty to “HELP ME!” by putting away some of the mess I had created. I mean, it’s not like I wasn’t organised… I had gotten all the ingredients out and sectioned into their dishes, had the oven on, the stove top heating and a clear bench before I started.

Now, I won’t take you through it blow by blow… but at the completion of the meal: Masterchef was already 10 minutes in (70 minutes cooking time); the kitchen looked like thieves had searched the pantry for precious metals; and I was looking less than cool, calm and collected.

Setting yourself a cooking time trial certainly gives you an appreciation for what the contestants of Masterchef go through. I was in a familiar kitchen, didn’t have cameras breathing down my neck and didn’t have the stress of plating a half finished dish to serve to the judges – I can’t even imagine how difficult it would be in that situation.

Once the meal was done though it was fab! All the elements were really easy to cook and tasted great, but we loved the dressed potatoes and Portuguese tarts best and will definitely make them again. Below is the recipe for all four dishes taken from Jamie’s 30-Minute Meals and also found here. 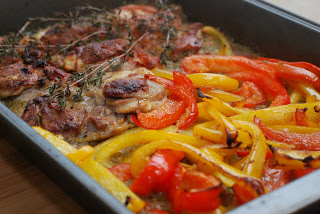 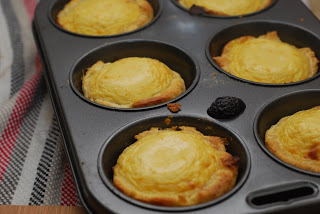 TO START: Get all your ingredients and equipment ready. Turn the oven on to 200C/ gas 6. Put a large griddle pan on a high heat.

CHICKEN: Put the chicken thighs on a plastic chopping board, skin side down, and slash the meat on each one a few times. Drizzle with olive oil and season, then put on the griddle pan that is heating up, skin side down. Cook until golden underneath, then turn over. Wash your hands.

TARTS: Dust a surface with flour. Unroll the pastry, then cut it in half so you have two 20cm x 20cm (8in x 8in) squares (put one in the fridge for another day). Sprinkle over a few pinches of ground cinnamon, then roll the pastry into a Swiss-roll shape and cut into 6 rounds. Put these into 6 of the holes in a muffin tin, and use your thumbs to mould the pastry into the holes, so the bottom is flat and the pastry comes up to the top. Put on the top shelf of the oven and cook for 8 to 10 minutes, or until lightly golden.

POTATOES: Wash the potato and sweet potatoes and halve lengthways. Put them into a large microwave-safe bowl with ½ a lemon. Cover with clingfilm and put into the microwave on full power for 15 minutes.

CHICKEN: Turn the chicken over.

PIRI PIRI SAUCE: Peel and roughly chop the red onion and add to the liquidiser with 2 peeled cloves of garlic. Add the chillies (stalks removed), 1tbsp paprika, the zest of 1 lemon and juice of ½ a lemon. Add 2tbsp white wine vinegar, 1tbsp Worcestershire sauce, a good pinch of salt and pepper, the bunch of basil and a swig of water. Blitz until smooth.

CHICKEN: Slice the peppers into strips and add to the griddle pan. Turn the heat down to medium and keep moving the peppers around.

TARTS: Take the muffin tin out of the oven, and use a teaspoon to press the puffed-up pastry back to the sides and make room for the filling. Spoon the créme fraîche mixture into the tart cases, and return to the top shelf of the oven. Set the timer for 8 minutes.

CHICKEN: Pour the piri piri sauce into a snug-fitting roasting tray. Lay the peppers on top and put aside. Add the chicken to the roasting tray with the sauce. Scatter over the sprigs of thyme, then put the tray into the middle of the oven.

TARTS: Put a small saucepan on a high heat. Squeeze in the juice from the zested orange and add 4tbsp golden caster sugar. Stir and keep a good eye on it, but remember caramel can burn badly so don’t touch or taste.

POTATOES: Finely chop the red chilli and most of the coriander on a board, mixing as you go. Add the feta and keep chopping and mixing.

CHICKEN: Take the tarts out of the oven and move the chicken up to the top shelf to cook for around 10 minutes, or until cooked through.

TARTS: Pour some caramel over each tart (they’ll still be wobbly). Put aside to set.

SALAD: Quickly dress the rocket, still in its bag, with extra virgin olive oil, a good pinch of salt and pepper and the juice of ½ a lemon.Tip into a bowl and take to the table.

POTATOES: Check the potatoes are cooked through, then use tongs to squeeze over the cooked lemon. Add the coriander mixture from the chopping board and mix everything together. Season, then take to the table.

TO SERVE: Get the tray of chicken out of the oven, sprinkle over a few coriander leaves and take straight to the table. 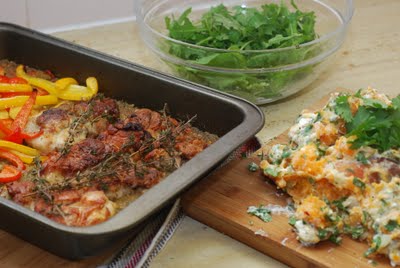 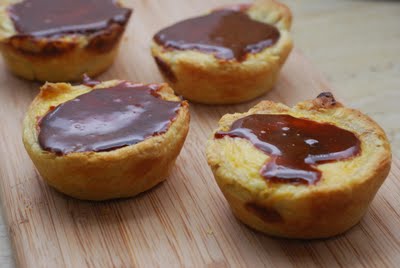