The third course of our family culinary challenge was for the care of my sister. Prior to the dinner – while at menu planning stage – my sister had decided she wanted to make a pie. Having sighted the Beef & Mushroom Pie recipe on this very blog, she decided that was the recipe she would try.

With Scotty and I already in love with this pie and wanting to share it with as many people as possible, I thought it was a great idea (it also meant I only had to write three blog posts instead of four).

You can find the Beef & Mushroom Pie recipe HERE

It wasn’t until the end of the second course that my brother-in-law realised he had probably picked the worst position in the culinary challenge. As Scotty and I had course one and two, once our dishes were done we could sit back, relax and drink some fabulous wine. For my brother-in-law, he had to sit through three courses worrying about his dessert and trying not to get too drunk so that it impeded the completion of the soufflé.

My brother-in-law had recently made chocolate soufflés using this recipe and as they were a complete success, he thought he would make it again for our culinary challenge. Let it be known that even though the rest of us cooked dishes we had never made, being on dessert duty definitely compensated for not cooking a new dish.

These soufflés were wonderfully light, fluffy and extremely flavoursome and I can’t wait to give them a go myself! 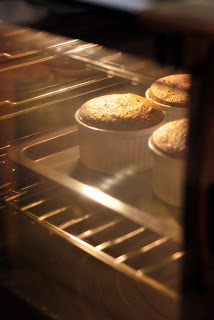 Preheat oven to 180°C. Brush 8 ramekins (8cm in width, 4-5cm in height) with the softened butter in upward strokes, from the base to the rim. Chill the dishes for 5 minutes, then as an insurance policy so the soufflé doesn’t stick to the dish, apply a second coat as before.

Sprinkle a little grated chocolate into each dish, tilting and rolling the dishes around to line them with an even layer of chocolate.

For the crème pâtissière, slake the corn flour with a little of the milk, then gradually add the rest of the milk until you have a smooth mixture. Pour into a small pan, and slowly bring to the boil, stirring continuously. Boil for 30 seconds then off the heat, add the chocolate and whisk until smooth. Beat in the egg yolks until smooth before transferring to a bowl to cool.

Whisk the egg whites to soft peaks. Gradually start to add in the sugar, whisking well in between each addition. Once all the sugar has been added, continue to whisk until you have a thick and glossy mixture.

Add one third of the egg whites into the chocolate crème patisserie mixture and mix well. Now add in the remaining egg white and gently fold into the mix. Do not over work the mixture as it will become too hard and stiff.

Divide the mixture between the ramekins. Level the surface with a palate knife then bake for 6-8 minutes, or until well risen and with a slightly wobbly centre. Remove from the oven and dust with the remaining cocoa powder. Serve immediately with a scoop of vanilla bean ice cream. 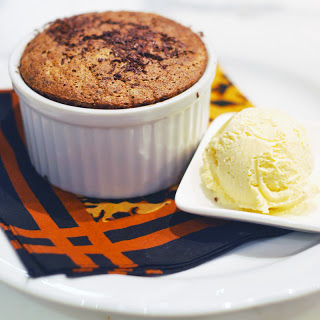