Christmas time is family time – and this year, the lion’s share of my Italian family are in Canada skiing (extreme jealousy felt at this end).

As the Italian contingent is away, Scotty and I didn’t have to go to Perth to visit mum and dad and instead we stayed in Sydney and had a relaxing Christmas day with his mum where no chicken, turkey, ham or Christmas pudding was consumed (or lasagna – which is another of our family Christmas day traditions). In its place, stood corn and capsicum fritters with oven roasted tomatoes and rocket for breakfast, steamed lobster tails with a chilli, lime, butter sauce served with sour cream and chives potato salad for lunch and a Grand Marnier icecream cake with toasted almond slivers, dark chocolate almonds, marshmellows and a hard chocolate casing for dessert. It was brilliant!

Being away from the family at Christmas made me surprisingly nostalgic and my thoughts took me to our last visit to them in Perth in September. On our last night there, dad fired up the wood fired oven he had custom built in the back yard to cook us slow cooked goat, preserved lemon chicken and roasted vegetables.

As always happens when dad cooks… mum ends up doing most of the work – she preps all the food ready for cooking, then dad fires up the oven, puts the food in the oven, and he and mum argue over how long to leave the food in for.

As a true Italian, my dad likes to show off whenever possible and prepping a fire in the wood fired oven is no exception. The oven was built in the backyard under the pergola when they last renovated their house (they have renovated a few times since they first built it in the 1970s) and it was a bit of a bone of contention. Mum didn’t really want it as she knew it would cause more work for her if they got it, but dad won out as usual and in it went (it’s not worth arguing too much when he has decided he wants something as he will just wear you out talking about it until you let him have it). It’s certainly not something that you would use every day as it takes a bit of time and practice till you have the fire just right for cooking.

On our last night in Perth we arrived to Dad in the backyard regulating the heat of the oven after having lit a fire earlier that day. We sat down to a couple of ice cold beers outside as dad kept working the embers of the oven and when the temperature was just right mum brought down the trays of goat, chicken and vegetables and they were slid into the oven.

While our dinner was cooking, dad cut up slices of hot Italian salami, threw them on a pizza tray and put them in also. Five minutes later we were eating the salami straight from the tray with squeezes of lemon.

After a small argument as to when the goat would be ready, a decision was made and dinner was served. It wasn’t till I went through the photos the next day that I realised the only thing I got a photo of after cooking was the chicken! Ultimately, everything that came out of that oven was just so unbelievably tasty that I got more carried away with the eating then I did with the photographing.

If you get the chance, I would highly recommend cooking in a wood fired oven. Pizzas aren’t the only thing that taste wonderful in them, in fact anything you cook in them at all comes out with an added smokey flavour that seems to enhance all the natural flavours. 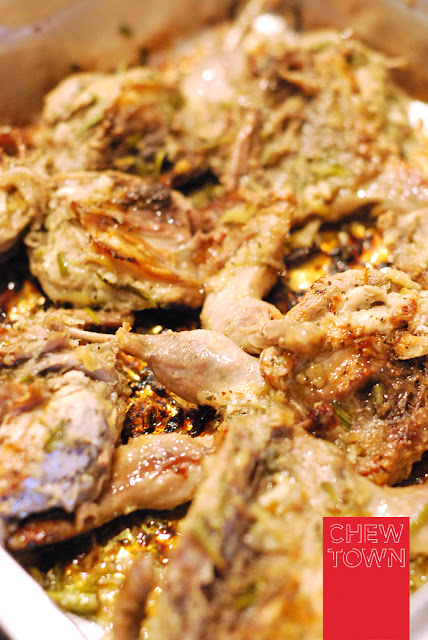