In the spirit of this blog, today I thought I would take one of the five Italian dishes I can cook with my eyes closed and make it. The task was designed to give me the freedom and enjoyment to cook off book without constantly running back and forth from cookbook to stovetop to make sure I am doing it right.

As Scotty D had to work all day today, I wanted to cook something tasty and comforting for his return. But, I also wanted it to be relatively labour intensive so I would be rewarded with an extreme sense of satisfaction upon its completion.

The dish I settled on was my mum’s traditional Pasta al forno (roughly translated to Pasta cooked in the oven) its basically a lasagna but with penne pasta instead of pasta sheets. This was the dish my mother used to make every fortnight when she knew we would all be eating at different times. It was the dish we would arrive home hoping to see in the oven. When I would arrive home first and score the crispiest corner piece, the Halleluja chorus would start resounding in my mind. 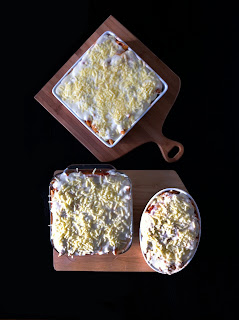 Heat the olive oil in a medium saucepan then add onion and garlic and saute until soft. Add the whole bottle of tomato passata along with salt and pepper and basil then bring to the boil. Once boiling, turn the heat down and simmer for about 40 mins. Making a pasta sauce is really all about the taste. While the sauce is simmering, I keep tasting it until the acidity of the raw tomatoes cooks out of the sauce.

Put a large pot of water on the stove until it reaches boiling point. Once boiling add a small handful of salt and then a whole packet of penne rigate - Barilla is the only pasta my mother would use if she wasn't making the pasta herself and for me, this penne is quintessential to my mothers Pasta al forno. Bring to the boil again and then reduce heat and simmer (stirring occasionally) until the pasta is cooked al dente (firm to the bite but not hard). Once cooked, drain and stir in a couple of spoonfuls of the pasta sauce until the penne is coated.

In a medium saucepan, heat the butter over medium-low heat until melted. Add the flour and stir until smooth. Over medium heat, cook until the mixture turns a light, golden sandy color, about 6 to 7 minutes. Meanwhile, heat the milk in a separate pan until just about to boil. Add the hot milk to the butter mixture 1 cup at a time, whisking continuously until very smooth. Bring to the boil then cook 10 minutes, stirring constantly, then remove from heat. Season with salt and nutmeg, and set aside until ready to use.

Once you have all three elements prepared, the only additional thing you will need for the assembly is grated mozzarella cheese.

First you will need a layer of penne pasta. Once that is in place, add some tomato sauce and sprinkle mozzarella on top of it, then add another layer of penne, then sauce, then mozzarella until you are level with the top of the dish. Then pour the Béchamel sauce on top so it covers all the pasta and sprinkle again with mozzarella.

I made double quantities today and the best part about that is that I am able to cook one dish of Pasta al forno tonight and freeze the other two after assembling should there be unexpected guests in the near future.

Preheat the oven to 180 degrees Celcius, cover the dish with aluminium foil and bake for 30 minutes covered. After 30 minutes, remove alfoil and cook in the oven until the mozzarella and béchamel browns. Once brown, turn oven off and leave dish in oven covered again with alfoil until you are ready to eat (it will need to sit for about 15 minutes before being served).

Needless to say, the Pasta al forno with a small side salad and a glass of wine was exactly what Scotty D needed after returning home from working all day on a Sunday! 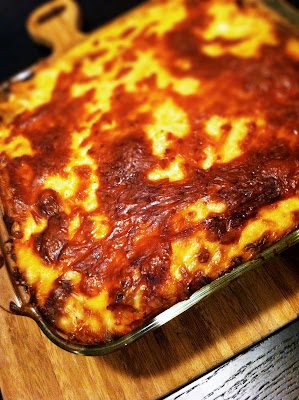