I like Bill Granger. Not in a weird way… I just like what he does for food. His recipes are packed full of flavour, don’t require a multitude of ingredients or steps,  are easy to make and once you have cooked one a few times you can do it without the recipe – which is the ultimate aim my friends.

I first came across Bill’s Fragrant Chicken and Spinach Curry recipe when I was deciding what to cook for Scotty and I for our “We aren’t buying into Valentines Day” dinner on Valentines Day. As we weren’t buying into Valentines Day, I couldn’t exactly cook something extra special. Instead I settled on Bill’s recipe as it came from the Everyday cook and it seemed fitting for the occasion (if I could have found a cookbook titled Just another day – don’t buy into it then I probably would have cooked from that instead).

That night, when I made it for the first time it turned out brilliantly. As a result, I now make it every second week – It is flavoursome, fresh and healthy, quick and easy to make, heats up well the next day and goes brilliantly with a West Australian Little Creatures beer.

Scotty was feeling unwell the other day so I popped into the shops after work and made him the Fragrant Chicken and Spinach Curry we so enjoyed on “We aren’t buying into Valentines Day” night (sans recipe). It seemed to be just what the doctor ordered.

I can now proudly say that I can make it without the recipe (even adding my own flair to the dish here and there) but I would hate for you not to add it to your list of great dishes so below you will find the recipe as it appears in Bill Granger’s Everyday cookbook. 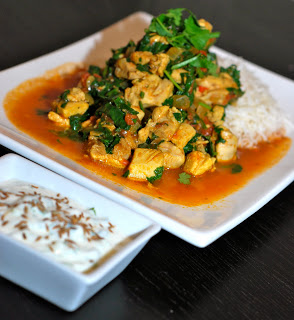 Stir in the tomatoes and salt and bring to simmering point. Reduce the heat to low, cover the pan and simmer gently for 15 minutes. Add the brown sugar, lime juice and baby spinach and stir until the spinach has just wilted. Remove from the heat, sprinkle with the chopped coriander and serve with steamed rice.

Bill’s Tip: If freezing, cool after you have added the lime juice, but don’t add the spinach. Freeze in a lidded box or ziplock bag. Thaw thoroughly, then add the spinach once you have reheated the curry. Complete the recipe as above.