It’s no secret that Vegemite is an acquired taste. I’ve enjoyed many an overseas continental breakfast where I watch a table of non-Australians have their first taste of toast with Vegemite. Boy do they hate it! The first mistake is that they usually don’t put butter on it first, the second is that they slather it on like you would jam or honey. Now, I like my Vegemite slathered on like jam or honey… but I’ve been eating it for years and have built up a tolerance. I felt like a bit of a snack today but couldn’t be bothered making something labour intensive. Also, the cook top is broken so I could boil or fry – it had to go in the oven. I had some left over puff pastry in the freezer from the beef and mushrooms pies made the weekend before so in a moment of genius I took a sheet of puff pastry, slathered it all over with Vegemite, sprinkled cheese over the top, rolled it up, cut it into six and popped them in the oven till the cheese was bubbling and the puff pastry golden. 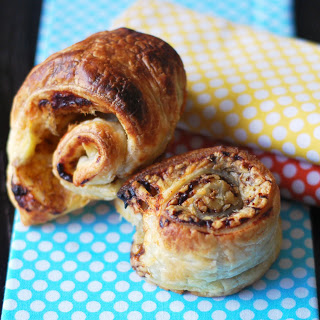