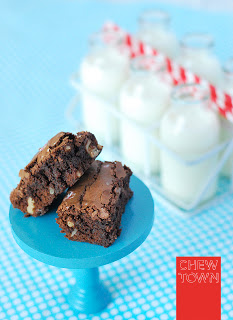 This time last year I was super organised – Christmas shopping done, homemade presents for work friends completed, bags packed for our Noumean holiday and presents sent to Perth for the rest of the family.

A year on and I am a Christmas disgrace. I have bought no presents, have no holiday plans and have sent nothing to Perth. I have however, just yesterday, rectified one of the many uncompleted tasks and made presents to give to work mates!

Last year I spent time planning and making large batches of Christmas cookie jars last year which took a lot of time, and turned my kitchen bench into a disaster zone – but they were universally loved!

When deciding what to make this year, I thought I would simplify things and tweak a recipe I cooked back in June for the most amazing chocolate fudge brownies. It seemed like a good choice as the brownies were so moorish at the time I had to give them all to Scotty to take to work just so I didn’t devour the lot of them.

Given it is Christmas time I wanted to add some festive flair to the brownies, so the addition of crushed candy canes adds a touch of peppermint crunch and turns the fudge brownies into the perfect Christmas treat for friends!

The real key to the moorishness of these brownies is to use the best dark chocolate you can find, it makes them taste extremely decadent and means that only a few small pieces will satisfy any chocolate craving.

I decided to make a massive double batch of chocolate fudge brownies so that no-one at work had to miss out. The completed brownies turned out truly brilliant indeed and I am looking forward to handing these out to the masses tomorrow for instant consumption!

Preheat the oven to 180 degrees celcius. Grease a 20cm x 30cm baking pan and line the base and sides with baking paper.

Place the butter and chocolate in a heatproof bowl and place over a saucepan of barely simmering water, making sure that the base of the bowl does not touch the water, and stir until melted. Set aside to cool to just above room temperature.

Using elextric beaters, beat together the eggs, sugar and a pinch of salt in a large bowl until pale. Fold in the cooled chocolate mixture, followed by the flour, then fold in the walnuts & candy cane pieces. Try not to overmix or it will lose some of its air.

Spoon into the prepared pan and bake for 25-35 minutes. When tested with a skewer it shouldn’t come out completely clean like it does when testing a cake, but it shouldn’t have raw mixture on it either.

Remove from the oven and allow to cool in the pan, then turn out and cut into squares to serve.

Store the brownies in an airtight container for 3-4 days at the most. 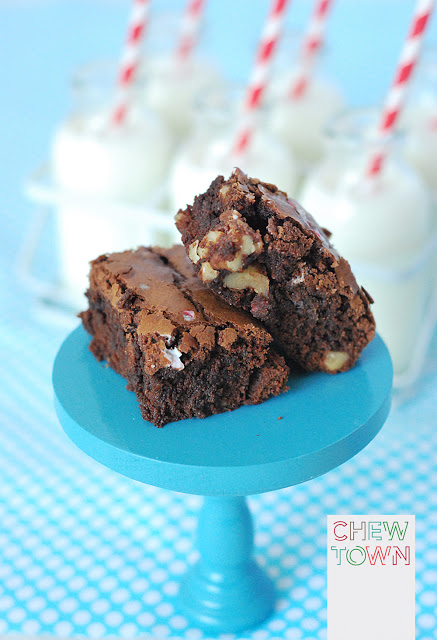