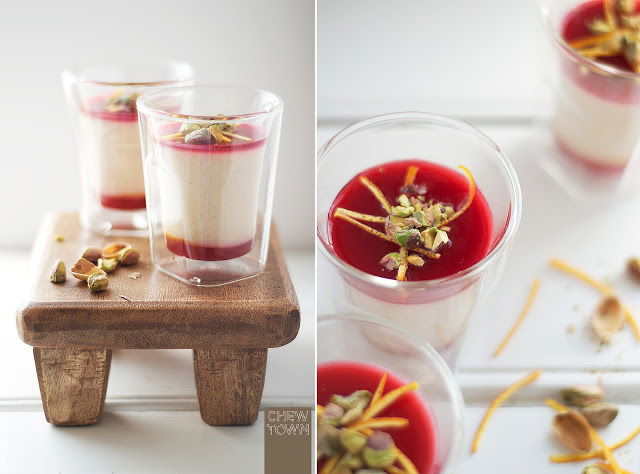 I’ve become a lover of citrus later in life. I never quite understood my mother’s fascination with citrus and why she would add it to every savoury dish and choose a citrus dessert over a chocolate one. I’m now beginning to understand her love of citrus and the way it can lift a dish and I now regularly add a touch or lemon or lime to almost everything.

Recently I decided I wanted to make a chai panna cotta and I found myself thinking that the spiced creaminess of the panna cotta would be offset beautifully by the fresh zing of a blood orange jelly. It seemed a perfect combination to me, both in flavour and for the look of the dessert.

I do have to admit that I used to be scared of trying dishes that required gelatine, worried that I would either overestimate or underestimate the amount of gelatine required. But since a successful rendition of Rachel Lane’s Persian Delight Jelly at Easter, my trepidation has eased.

Mum was over from Perth last week and so we had her over for dinner and a catch up. Knowing how she loves light desserts, it was the perfect opportunity to try out the chai panna cotta with blood orange jelly I had been concocting. I served up a fragrant fish and fennel pie to start and then served up these little jeweled beauties.

They were certainly impressive when winding their way to the table, and after first bite we all agreed that there was a great balance between the panna cotta and the jelly. A wonderful light and fragrant end to the meal! 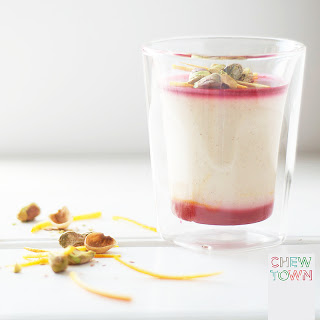 In a  small glass/mug place 1/3 cup boiling water and add cardamom, cinnamon bark, cloves and teabags and set aside to steep for 30 minutes.

Heat 100ml blood orange juice and 20g sugar in a saucepan until sugar has dissolved. Stir in 1/4 tablespoon gelatine powder and stir until completely dissolved. Divide the mixture between 6 dessert glasses and pop in the fridge to set.

Strain the teabag mixture into a bowl retaining just the liquid. In a saucepan, place liquid from tea mixture, buttermilk, sugar, ground cinnamon and vanilla. Cook over a low heat until sugar has dissolved and buttermilk is warmed. Then remove from heat.

In a small bowl place remaining boiling water and add 1 tbsp gelatine. Whisk until dissolved then pour into buttermilk mixture, and whisk until combined.

Cool down the mixture to room temperature. Remove glasses with blood orange jelly from fridge (jelly should now be slightly firm to the touch) and divide the panna cotta mixture between the glasses. Place in the fridge for two hours until panna cotta is firm to the touch.

Heat the remaining 100ml blood orange juice and 20g sugar in a saucepan until sugar has dissolved. Stir in 1/4 tablespoon gelatine powder and stir until completely dissolved. Cool to room temperature then divide the mixture between 6 dessert glasses and pop in the fridge for another 4 hours to set completely.

Prior to serving divide the pistachios and blood orange jelly rind between the six glasses and serve. 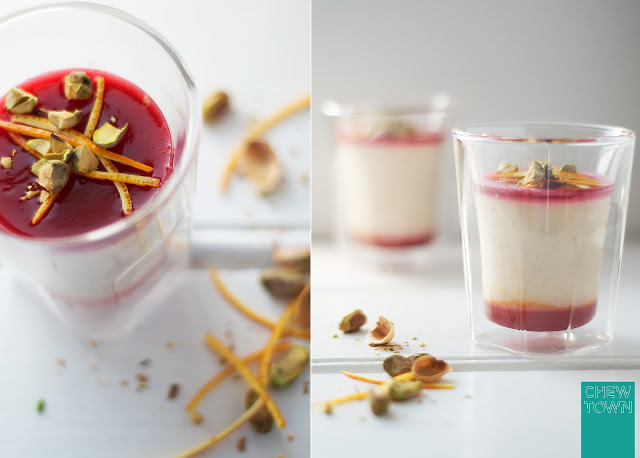