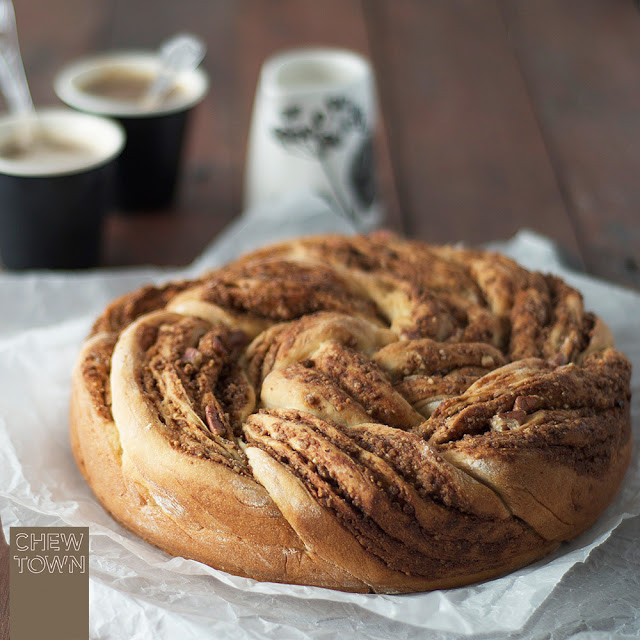 Further to the announcement of my new Kitchenaid Artisan Mixer, I’ve been considering everyone’s thoughts on what to name her (thanks to all for the ideas) and I’ve chosen the name Beatrix – kindly suggested by Scotty’s dad. I like Beatrix for a few reasons: 1. It reminds me of Beatrix Potter, 2. It means ‘Bringer of Joy’, 3. It beats… and will be called Beatrix! (nuff said).

It took a little while to come up with the recipe for the filling but after some consideration, I opted for a butter, cinnamon, pecan, brown sugar and hazelnut meal mixture, and it was wonderful. There is no place for regular cinnamon buns in this household.

Making the braided bread is actually much simpler than you might think. Once you have made the bread dough, you roll it into a large rectangle, spread the filling on top, roll it, slice it down the centre, plait it and roll the plait around itself … ok, it sounds complicated when you read it, but just look at the how to photos in the recipe below and you get the idea. It is a simple way to achieve an impressive result.

In other news… I’m writing this from Adelaide as I’m in town to attend the annual EatDrinkBlog food bloggers conference which starts tomorrow morning. Looking forward to meeting more of my fellow Aussie foodies first thing at the Adelaide Central Market!

DOUGH
Combine milk, yeast and sugar in a bowl and set aside in a warm place for 10 minutes or until frothy.

Sift flour twice and add salt. Make a well in the centre of the flour and pour in the yeast mixture and the egg. Mix until well combined then transfer to a clean and floured bench and knead until dough is elastic and pliable.

Put dough back into the bowl, cover with glad wrap and set aside until it has doubled in size (about 40 minutes).

Once it has doubled in size, return to a floured bench and roll out into a large rectangle about 1/2 cm thick. Preheat oven to 180° Celsius.

FILLING
Mix together butter, sugar, cinnamon and hazelnuts in a mixer till it comes together into a crumbly paste. Take this filling and sprinkle it liberally over the rectangular dough covering the surface. Next, sprinkle the chopped pecans over the filling. 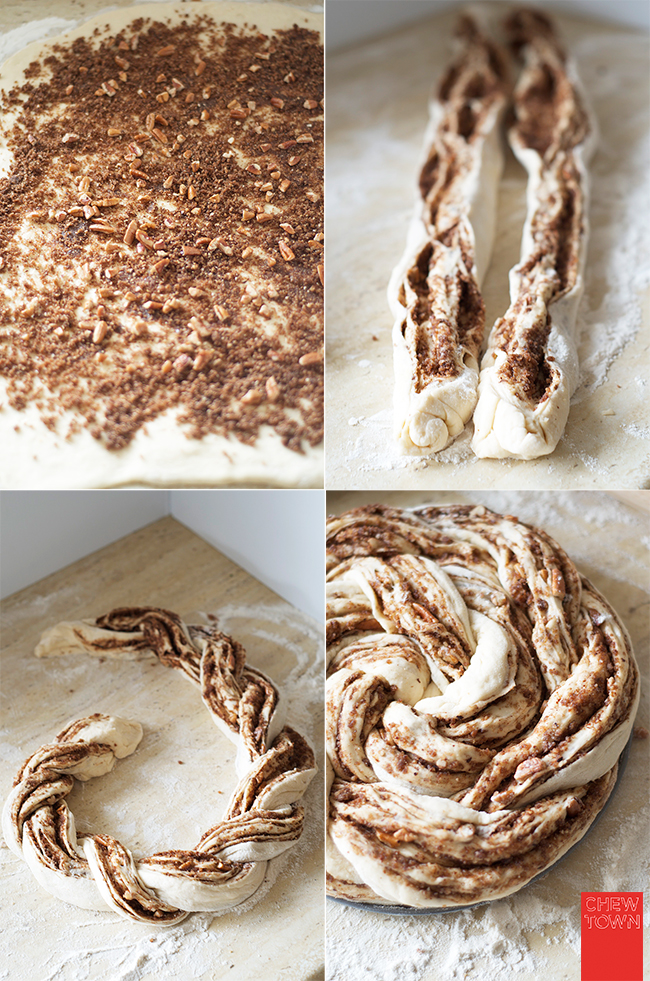 Starting with the long side of the dough, roll carefully until a log is formed. Slice the log down the centre and roll open each side so that the filling is facing the top. You will now have two long piece of dough and should be able to see the filling inside (see images above). Join the two pieces at the top and fold each side back over the other till you have plaited both pieces together.

Take a non-stick 22cm spring form pan and remove the base. Take one end of the plait and place it in the middle of the base. Roll the plait around itself until it has filled the base tucking the end under. Then lock in the sides of the spring form pan. Set aside for 20 minutes to rise again.

Place in the oven and bake for 40 – 50 minutes until bread is golden (and the scents of cinnamon and pecan have invaded your home). Remove from oven and cool in pan for 10 minutes before removing and serving.

NOTE: Let’s face it, bread tastes the best the day it is made. If you find yourself with leftover bread, how about turning it into a bread and butter pudding – with all the gorgeous cinnamon and pecan flavour, you dont need to add much to the custard to make a wonderful pudding. 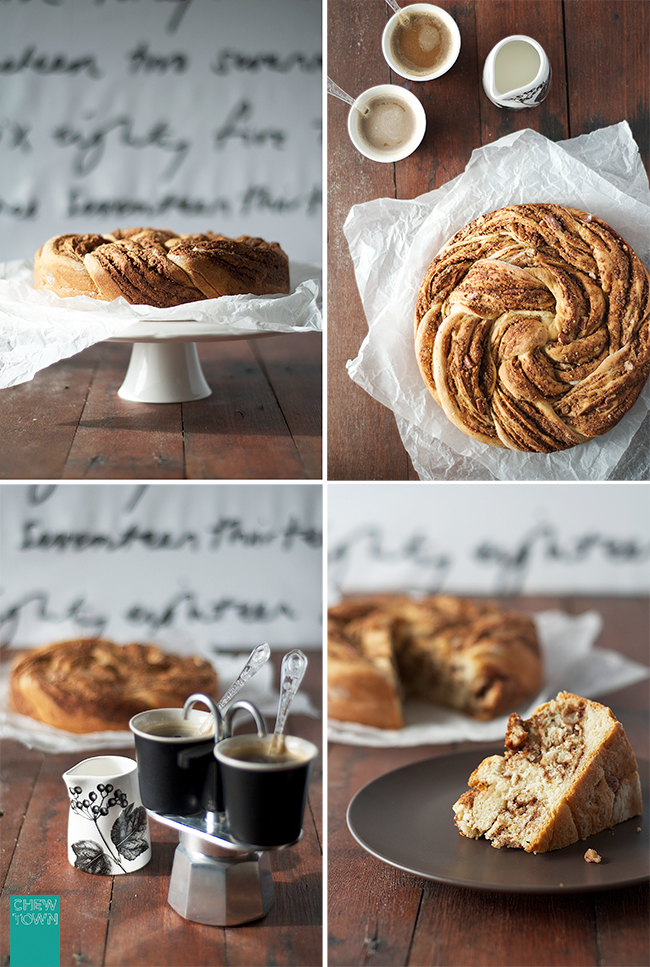