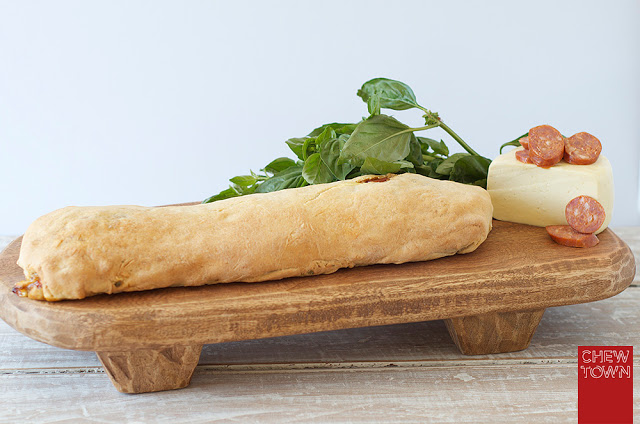 In my other life I am extremely fortunate to work for Opera Australia. Opera has always been my first love and by managing the sponsorship team at OA, I get to enjoy opera every day while also sometimes finding myself in some great situations.

A few weeks ago Opera Australia’s wine partner Wingara Wine Group held a Katnook Estate wine dinner at Matt Moran’s other Sydney eatery (the more relaxed Chiswick Restaurant) and invited me along as a guest. The dinner was to celebrate the release of Katnook Estate’s 2010 vintage which was one of their best on record.

It should come as no surprise that the wine and its matching food was exemplary.  The menu read as follows:

I am definitely learning to love red wine and it is not hard to when you get to end the evening on two exceptional limited release Coonawarra reds.

Seated on the Katnook Estate table next to Sean Shortt Director of Sales and Marketing for Wingara Wine Group, and Katnook Estate Snr winemaker Wayne Stehbens I was blessed with wonderful conversation for the evening.

Sean and I heartily discussed Italian and Spanish food during the dinner and I was grateful for the tips he gave me for our Italy trip next year. During conversation he was telling me about this rolled pizza dish that he and his wife make which sounded spectacular – I duly asked him to pause while I got out my notebook as I instantly knew I needed to recreate this recipe.

Just from Sean’s description I expected it to taste wonderful, but what I hadn’t anticipated was this rolled pizza conjuring nostalgic memories for Scott of something similar he used to eat as a child.

This recipe is definitely a keeper and I can see myself making it many more times in years to come. It tasted pretty darn good just out of the oven and was also great cold the next morning for breakfast.

Thanks for the recipe Sean! 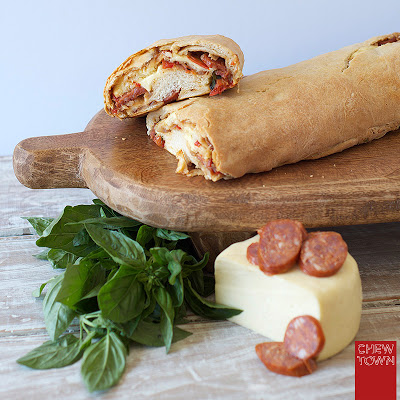 Add the olive oil to the ball of dough and need it in. Continue kneading the dough till the texture is smooth and elastic (about 8-10 minutes).

Return dough to the bowl, cover it with glad wrap and then a tea towel and keep in a warm place until the mixture doubles in size (depending on how warm it is it can take between 1-2.5 hours).

While the pizza dough has been set aside to rise, you can make the pepperonata (see below).

When risen, knock the dough back roughly in the bowl then knead it quickly for about 1 minute. Return to the bowl again, cover with glad wrap and the tea towel for another 30 minutes.

Remove from bowl and transfer to a well-floured bench top (it is important the benchtop is floured when you try to roll the pizza). Using a rolling pin, roll the dough out to a rectangular shape about 1 centimetre thick.

PEPPERONATA
Heat olive oil in a large frypan on medium high heat. Add the onion and saute for 2-3 minutes until the onions begin to colour.

Add the capsicum slices and stir well. Saute for 5 minutes until the peppers have softened stirring continually (you still want a little crunch as the peppers will cook again in the pizza). Add the garlic and saute for another 2 minutes. 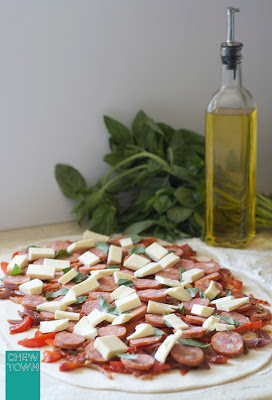 Season with the oregano, sugar and salt, then add the diced tomatoes and cook for another minute. Remove from heat and set aside.

ASSEMBLY
Preheat your oven to 180°

Spread the pepperonata over the rectangular shaped dough and the sprinkle the paprika evenly on top. season well with salt and pepper.

Add a layer of chorizo slices then drizzle with olive oil. Spread pecorino and torn basil evenly over the top. Starting from the long edge, carefully roll the base of the pizza over itself into a long log and tuck the edges underneath.

Transfer to a baking tray and place in the oven until golden brown on the outside (roughly 30 minutes).

Remove and set aside to cool for 5 minutes. Slice into thick 3 centimetre slices and serve. 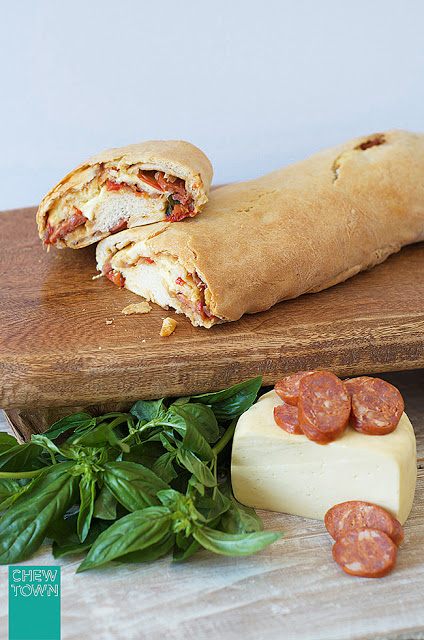