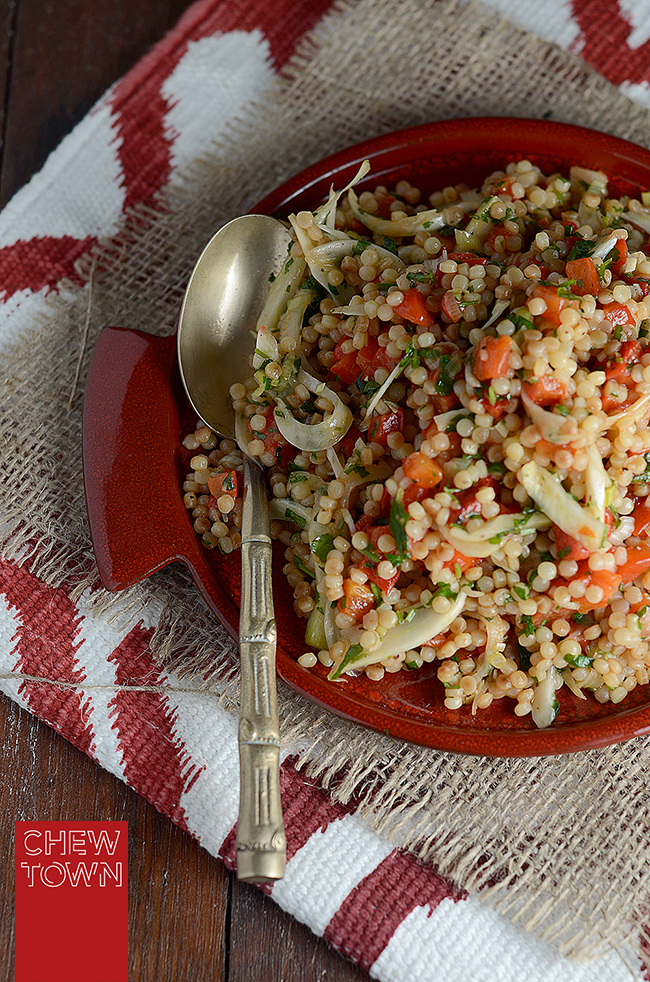 I am notoriously terrible at making interesting salads. I think it is because Italian salads are incredibly simple and usually only consist of three ingredients and oil/balsamic (think tomato, bocconcini and basil salad; or rocket, pear and parmesan salad). So, outwardly I blame it on my heritage but inwardly I blame it on a lack of salad imagination.

So, I am making a pledge (fingers crossed I can keep it) that I will bring more salad recipes to Chew Town in an attempt to get out of this salad funk.

I’m officially in love with pearl couscous. It was coming slowly but truly hit when I realised that toasting them until golden prior to adding water created a wonderfully nutty result. So I thought I would start with this hybrid side/salad recipe to get us started.

Inspired by Tabouli, I started by replacing burghul for pearl couscous, then used roasted capsicum instead of tomato and shaved fennel instead of onion. The parsley, lemon juice and olive oil just had to stay, and the resulting salad was fresh and zingy, with the little beads of couscous clearly content in their role as the star of the dish.

I can see this salad quickly becoming a favourite in our household.

Serves 2 as a side salad

Roast the capsicum under the oven grill until the skin is blackened. Remove from grill and place in a plastic bag for 5 minutes (this allows the capsicum to sweat and makes it easier to remove the skin). Peel the blackened skin off the capsicum and remove the seeds and discard. Finely chop the flesh.

In a bowl, combine capsicum, onion, fennel, parsley, lemon and 1 tbsp olive oil and mix till well combined. Set aside.

Heat remaining tablespoon of olive oil in a medium saucepan and add couscous. Cook until couscous is golden and toasted, stirring continuously. When golden add water and cook until al dente. Remove from heat and set aside to cool. Once cooled, add to capsicum mixture, mix well to combine and serve.