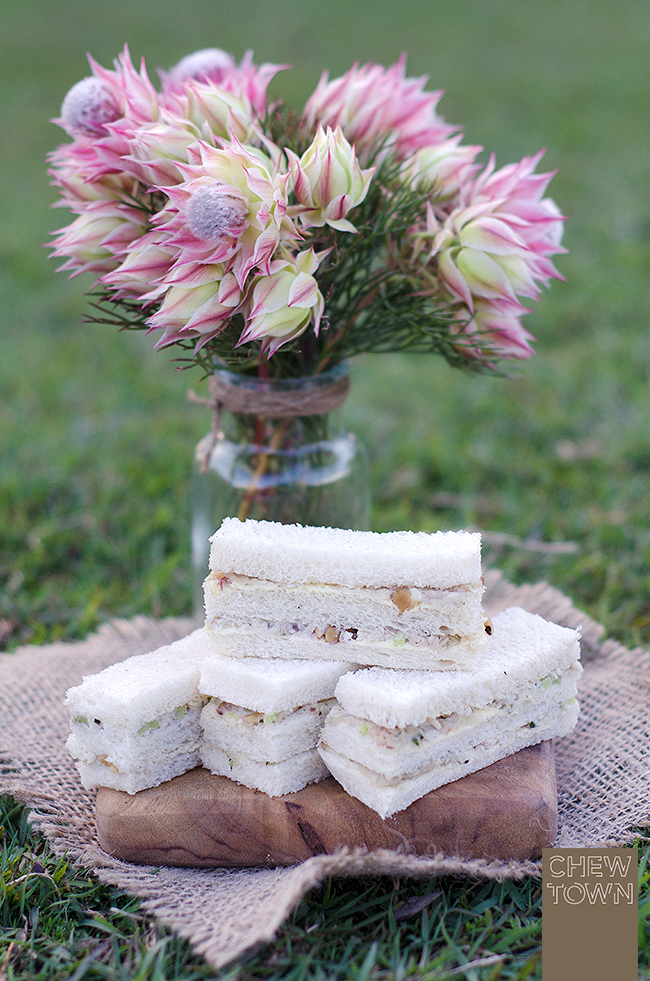 I had been pestering Scotty for a long time to go on a romantic weekend picnic and finally a couple of weeks ago, we locked ourselves in for a Sunday picnic… I love picnic food and its something that I’ve been wanting to feature on the blog for sometime. Because who doesn’t love a picnic?!

I’m a little embarrassed to say that the day before our picnic, after I had planned the menu and had gone shopping, I took stock of what I was about to do. It was then that I had to sit Scotty down and let him know that we may need to change plans for our romantic picnic for two, and perhaps think about turning it into a fun filled picnic for six. I had seriously over catered.

A couple of quick phone calls later and our lovely friends Jay and Christina, and Vicki and Matt were on board! Now I just had one night to make it all happen.

Never have I put myself under so much pressure. From 4pm to 12am the night before the picnic I cooked and cooked, and it seemed like I would never get through my menu. My feet started hurting at about 10pm and then the disasters started to happen thanks to silly mistakes due to exhaustion. But I refused to give up. It wasn’t until I plopped down on the couch at 12am and Scotty walked in the front door from a night out, that I looked up at him (utterly exhausted) and said: “I’m an idiot. I tried to do too much”… I think he agreed.

At the end of 8 long hours of cooking, I had made the following (all recipes to follow):

We headed to Centennial Park the next day with tables, linen, stands, flowers, boards and all manner of lovely things to set up a handsome looking picnic (because I never seem to do anything by halves). And what a wonderful day! The sun was shining, the company was wonderful, and the geese were in full regalia. 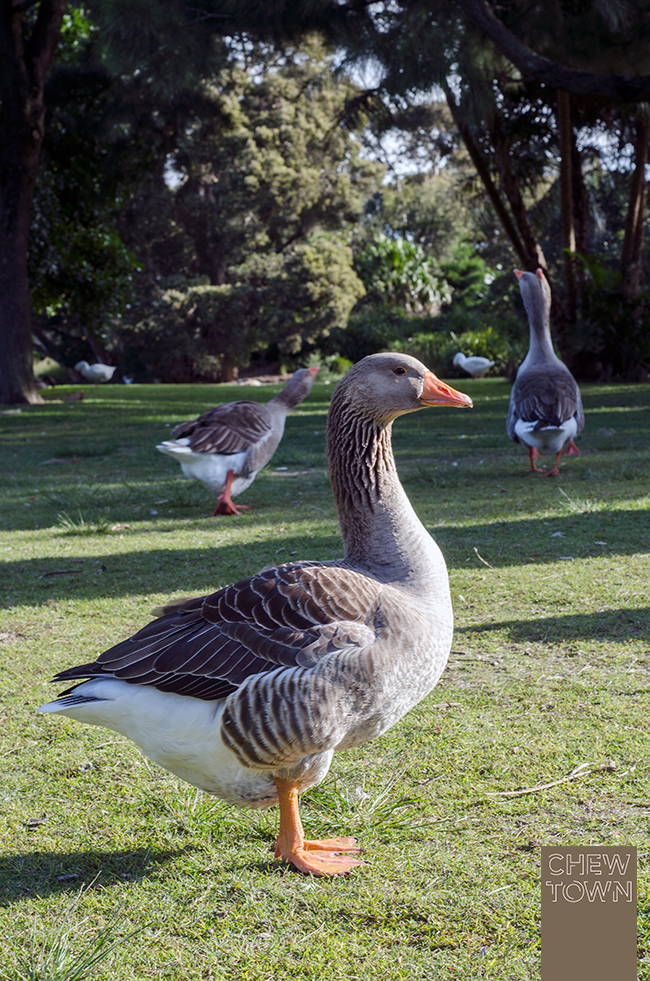 I definitely had enough food for the six of us, so we ate up a storm, drank a few glasses of white, played a couple of rounds of Bocce (lawn bowls) and left happy.

The rest of the recipes will follow over the next few weeks, but to start off the Chew Town Picnic Series, you just HAVE to try these triple decker Chicken Waldorf Sandwiches. They were the absolute savoury hit of the picnic and basically I took a Chicken Waldorf Salad and turned it into a sandwich filling! You’ve got to try these for your next picnic. I’ve already started getting requests to make more of them, so I know that these babies are going to be my chicken sandwich recipe of choice for a long time. 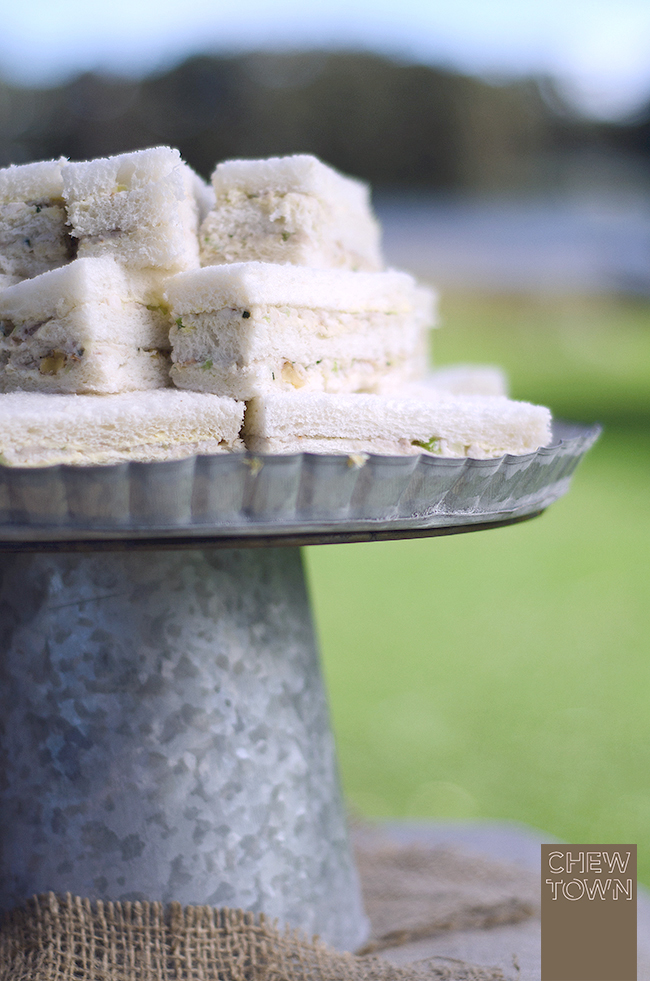 In a large bowl place chicken, celery, walnuts, apple, tarragon and mayonnaise and stir until well combined. Season with salt and pepper to taste.

Place three slices of bread on a chopping board and butter all three slices on one side. Top two of the slices with the chicken mixture. Place the second slice on top of the first and then top with the third slice butter side down. Using a bread knife, cut off the crusts and discard, then cut the sandwich into three fingers.

Repeat with remaining slices of bread and filling.

For easy storage and transportation, store the chicken sandwiches in a large tupperware container, with wet paper towel underneath, between each layer of sandwiches, and on top. This will help to keep the bread fresh if you make the sandwiches the day before. 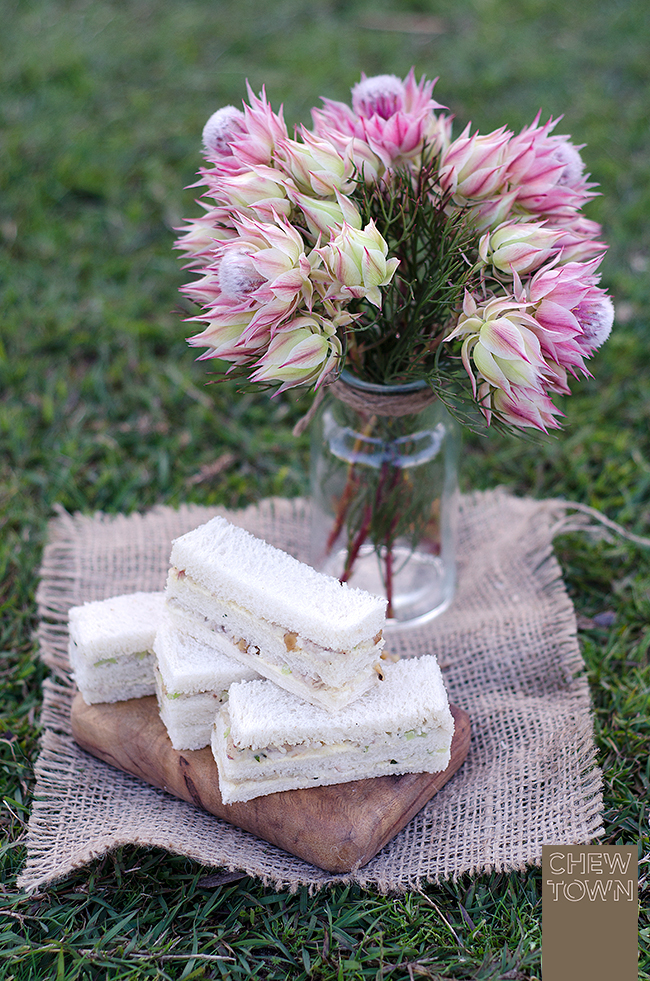