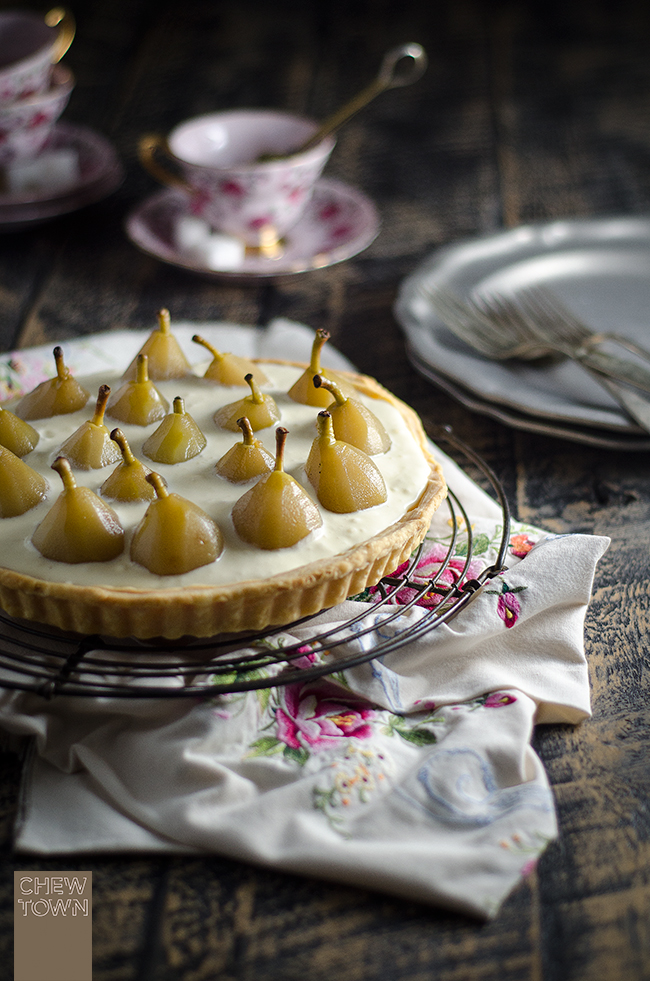 Confronted with the beauty of mini pears recently, my heart was set all a flutter.

Too darling for words, a bag of them was instantly added to the basket, dutifully carried home and placed in the fridge awaiting inspiration. It is nice to be dictated by the produce. It is the way it should be more often.

Planned weekly shopping to a menu doesn’t happen in our household. We visit the market on the weekend and buy based on the beauty of the produce to later decide what we will make. It might not work for those on a tight schedule, but we have a supermarket on our way home and we often drop in to buy ancillary ingredients without too much trouble.

It took a little while for me to decide what to make, but when inspiration struck I would not rest till it was made. The freshness of these pears meant they could rest anxiously in the fridge for a couple of weeks without any sign of ageing (another perk of market shopping). With a tart recipe formed in my mind and homemade rough puff in the freezer (recipe to follow) it didn’t take long before I was poaching pears, making mascarpone cream and piecing it all together to turn out this wonderful tart.

This is a make and eat on the same day sort of tart. The pears can be poached a couple of days in advance and left in the poaching liquid until ready to put together, but the tart case and cream are definitely best made the day it is served.

This poached pear and mascarpone tart is a perfect dessert for the warmer months and is served topped with a syrup made from the wonderful poaching liquid. 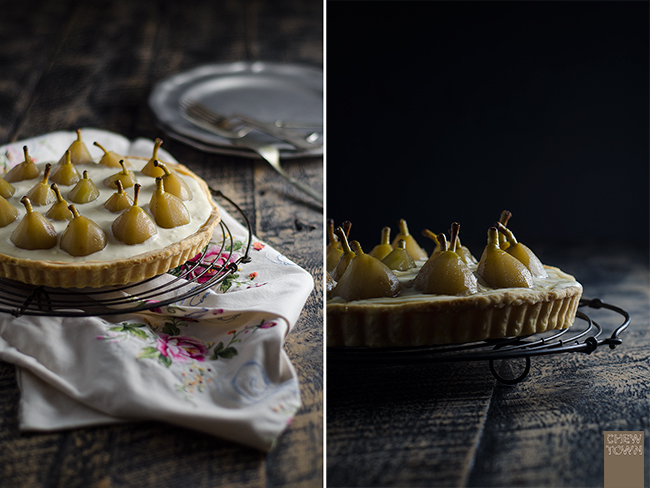 To a medium heavy based saucepan, combine caster sugar, cinnamon quill, vanilla bean and seeds, mint tea bag and water and heat on low heat until the sugar has melted. Take off heat and set aside – this is your poaching liquid.

To prepare the pears for poaching, peel them leaving the stem intact. To core them without cutting them in half, turn the pears upside down and using a sharp thin knife gently cut around the calyx of the pear at the base then using a small spoon remove the flesh that was cut and scoop out the seeds from the core. As you core each pear, add to the poaching liquid to prevent pears from discolouring.

Remove the tea bag and discard, then cover pears and liquid with a round of baking paper. Place saucepan on a low heat and simmer without boiling until the pears have softened (about 15-20 minutes). Take off heat and remove pears to cool separately to the liquid. When cool, store together in one container until ready to use.

Grease a 22cm removable base tart tin. Carefully line the tart tin with the pastry and then place in the fridge to rest for 30 minutes.

Line the pastry with baking paper then fill to top with baking weights or rice. Place in the oven and bake for 15 minutes until pastry is golden underneath paper. Remove paper and weights and bake for a further 5 minutes. Remove from oven and set aside to cool.

While the tart case is in the oven prepare the mascarpone cream. Beat egg yolks and caster sugar together until pale yellow and thickened. In a separate bowl beat egg whites until stiff peaks form. Add the mascarpone to the egg whites and stir through until just blended. Add egg yolk mixture and fold through with a wooden spoon until just combined. Set aside.

When ready to assemble tart, spoon the mascarpone cream into the tart case and top with the poached pears.

To serve with syrup, remove cinnamon stick and vanilla bean from the poaching liquid and boil liquid in a saucepan over medium-high heat until liquid turns to a syrup (about 15 minutes). Drizzle over pears and mascarpone cream.