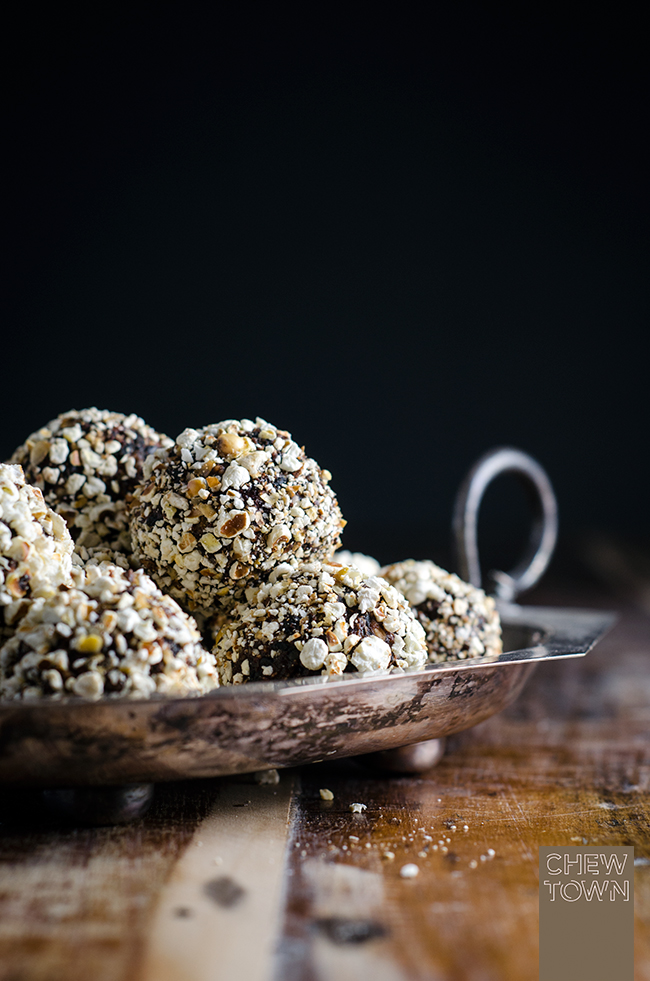 A little while ago I made popcorn florentines. I made these tasty treats with popcorn because it is quite possibly one of my most favourite things in the world and so why not add the things you love into as many dishes as possible. Also, it didn’t seem like a stretch for me to replace popcorn for cornflakes.

I always want to try and include everyone in the enjoyment of food and I was making the florentines to share with friends, one of whom has a gluten intolerance, so because the standard florentine recipes I had all called for a small amount of plain flour I needed an alternative.

This is when I looked over at all the freshly popped corn and thought… perhaps I can make popcorn ‘flour’?

Well, it was a revelation, and now I try to use popcorn ‘flour’ and popcorn crumb in as many things as possible. Popcorn flour is quite simply freshly popped corn blitzed in a high power blender until very fine fluffy “flour” is formed. Popcorn crumb is popcorn pulsed until the consistency of breadcrumbs is achieved. Both delicious, and both able to used in so many different ways. The crumb is wonderful used as a crust on fish or meats with finely chopped herbs and can also be incorporated into many treats.  I’ve not tried baking a cake with popcorn flour and I’m not sure how it would turn out… but watch this space because I’m prepared to give it a go.

These Black Sesame and Popcorn Power Balls feature popcorn crumb and are filled with tasty things designed to give you an energy boost. After eating one on afternoons when I felt a little flat, not only did I feel energetic, but I felt like I could do almost anything! Hence, rather than energy balls, these babies are titled power balls.

Now, other than the addition of popcorn, all the ingredients are raw, so if you are wanting to turn these spheres of tastiness into raw balls, then just omit the popcorn… but the popcorn is sooooo good, so I recommend you forget about how the popcorn is made.

After finding a large bag of roasted black sesame in an asian supermarket lately, I’ve also been finding ways to incorporate that into everything I make. I’ve now bought 3 bags of it in as many weeks as the nutty flavour of the roasted black sesame seems to be addictive, so it has found it’s way into many of our savoury and sweet dishes in recent weeks. The roasted black sesame also holds up well to the distinctive popcorn flavour in these power balls and helps to bring a little balance to them.

I kept these little guys in the freezer, which helps to keep them all together and ready for the moment you need a pick me up. And no need to feel guilty, these balls are pretty light on the bad stuff. 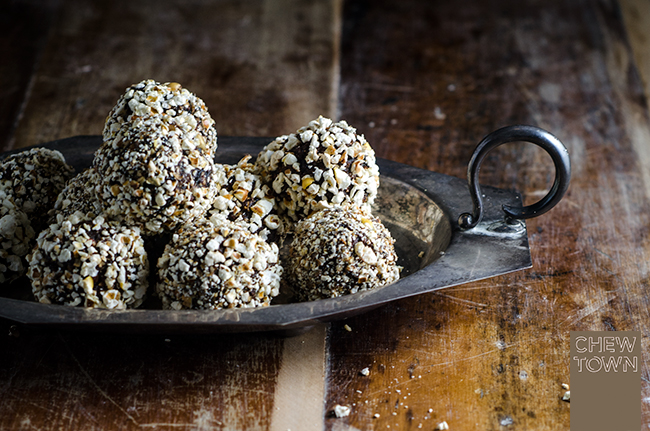 To the bowl of a food processor, add dates and dried berries and blitz until a paste forms.

Add in sesame seeds, 1/2 cup of popcorn crumbs, cocoa powder, vanilla extract, salt and peanut butter and pulse until well combined. The mixture should be tacky and hold together when pressed between your fingertips. If not, add a tablespoon of water at a time and pulse until the desired consistency has formed.

Taking tablespoon sized portions of the mixture, roll into balls between your hands and then coat in the remaining popcorn crumb. Freeze for 15-20 minutes until firm then enjoy. Keep in the freezer until your next attack of the munchies.

*Popcorn crumb is made by pulsing popcorn in your food processor until you have crumbs the consistency of rough dried breadcrumbs.