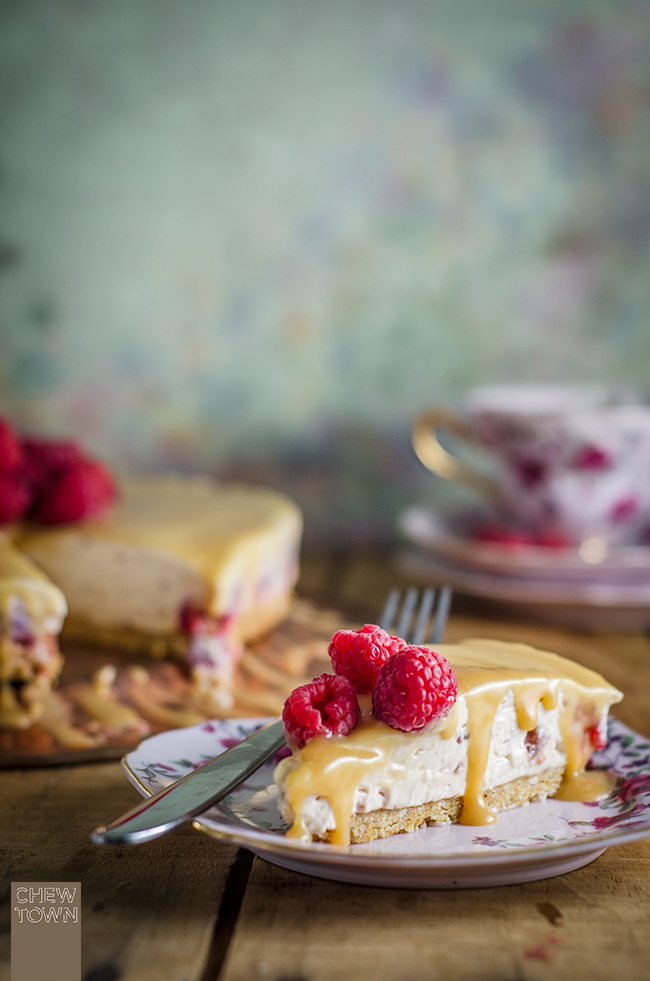 Hands up who loves a cooking challenge? Even though you can’t see my hands, imagine them both raised high in the air… with a look of glee on my face.

This Raspberry No-Bake Cheesecake with Toffee Sauce is the result of a Christmas challenge to create a recipe using as many ingredients as possible from a David Jones food hamper. But why? I hear you ask. Well, it’s that time of the year when gorgeous food filled hampers find their place on David Jones shelves helping to taking the pressure off buying presents for foodie friends during the silly season, and so the challenge was set… and I accepted.

After perusing the list of Christmas hampers available at David Jones (and wanting all of them), I thought through the myriad of recipe ideas that came to mind and finally settled on the Harrods Brompton Basket containing a biscuit assortment, raspberry preserve, toffee chews and english breakfast tea (I’ve conveniently taken a photo of its contents for you below).

I decided instantly that a cheesecake was in order as the biscuits would form the base and the raspberry preserve would flavour the filling. The toffee sauce was just an idea but I wasn’t sure how it would go with the raspberry filling. However, wanting to use as many of the hamper’s contents as possible in the recipe I gave it a try thinking I could always ditch it if it didn’t work.

After melting the toffees with cream to form a sauce I dipped in a couple of fresh raspberries and realised the sauce would work just fine… just fine indeed.

Now, I’m not going to lie to you, this cheesecake is a butter and sugar filled delight. But, there are fresh raspberries, so that’s good isn’t it? It’s fruit. It will feed 10 as you only need a small slice each, so when you’re looking for something to finish off your Christmas day meal and you don’t feel like turning on the oven because its so damn hot in Australia, this no-bake cheesecake could be the dessert for you.

For your chance to win one of these hampers, leave a comment on this post with which hamper you would like to win and why, and the best two answers will be chosen as the winners on Monday 15 December… just in time for Christmas.

Congratulations to Anita who has won the Australian Harvest hamper, and to Saskia who has won the Sweet Treats hamper. I loved both of their reasons for wanting the hampers, and their clever ideas for re-purposing the baskets! 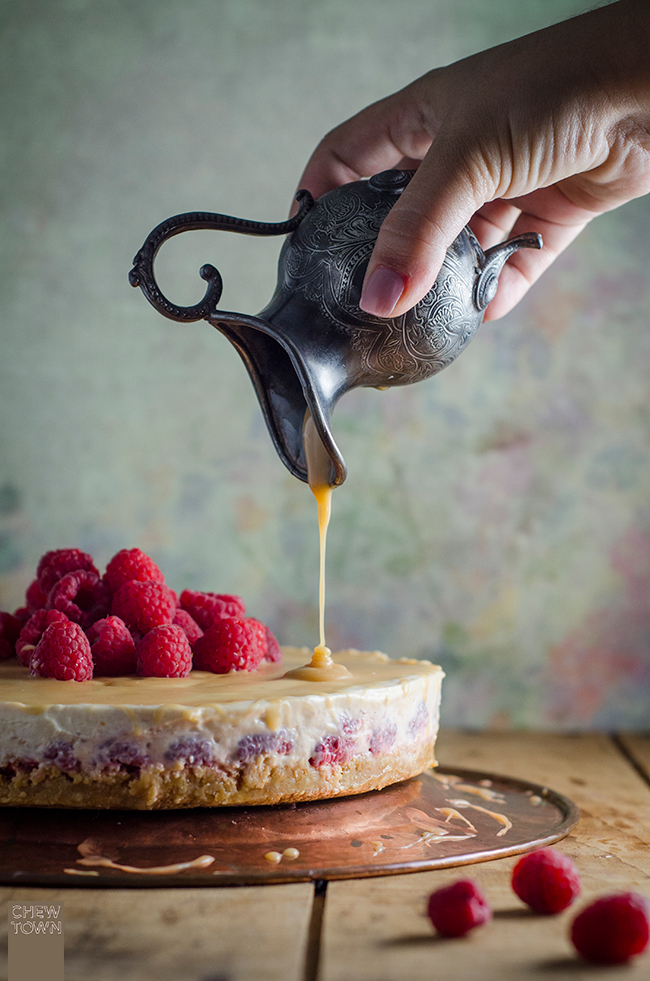 Place biscuits in a blender and pulse until fine crumbs form. Place crumbs in a bowl, add melted butter and stir till well combined.

Transfer crumbs to a lined 20cm spring form pan and press the crumbs down onto the base with a glass or mug to form an even layer. Place in the freezer to chill for 10 minutes.

Meanwhile in a large bowl mix cream cheese and condensed milk and beat with a hand mixer until smooth, add lemon juice and raspberry preserve and and mix until combined.

Remove the pan from the freezer and add a punnet worth of raspberries around the edge of the base. Pour the cream cheese mixture into the pan on top of the chilled biscuit base and fresh raspberries, cover with plastic wrap, and refrigerate until firm (about 3-4 hours).

To make the toffee sauce, combine toffee chews and cream in a small heavy based saucepan and heat over medium high heat, stirring constantly until the toffee chews have melted and combined with the cream. Refrigerate until ready to serve.

To serve, remove the cheesecake from the pan, pour the toffee sauce over, and top with the remaining raspberries.

Chew Town would like to acknowledge its partnership with David Jones for this post. You can read Chew Town’s disclosure statement here for more information on brands that Chew Town chooses to work with and why. The recipe above was created, developed and photographed by Chew Town using the Harrod’s Brompton Basket from David Jones hamper range.