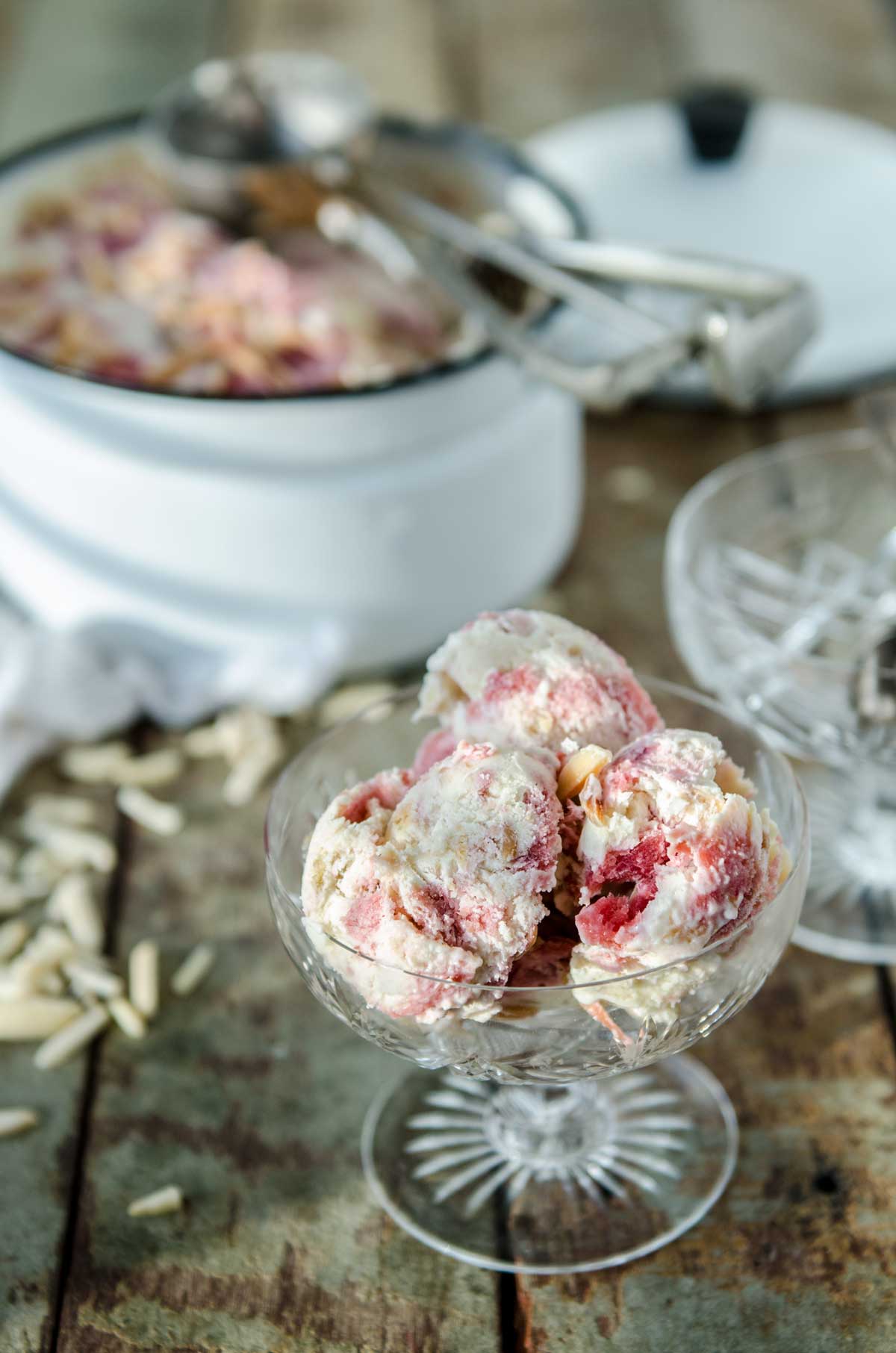 Altogether creamy, icy and crunchy in the same mouthful, this no-churn maple rhubarb and almond ice cream is one sophisticated yet easy dessert and quite possibly my favourite ice cream creation yet.

Rhubarb is something I developed a taste for as I got older. When cooked with a little sugar, it is both sweet and tart which is likely why it appeals to someone with a little more age. I believe once one has gotten over the desire for saccharin overload one can appreciate the subtleties of sweet and tart.

The gloriously blushed rhubarb (pictured below) which inspired this recipe was given to me by wonderful new friends. After visiting friends for the weekend in Jamberoo NSW, they introduced us to the gorgeous Tass and Vern from Jamberoo Valley Farm and we were sent home car laden with fresh produce cut from the garden.

I highly recommend a visit to Jamberoo Valley Farm if you are in the area or even if you aren’t in the area you can stay on the farm for a weekend away if you so desire. Stay tuned because my new friend Tass and I are about to start cooking up some fun activities together! 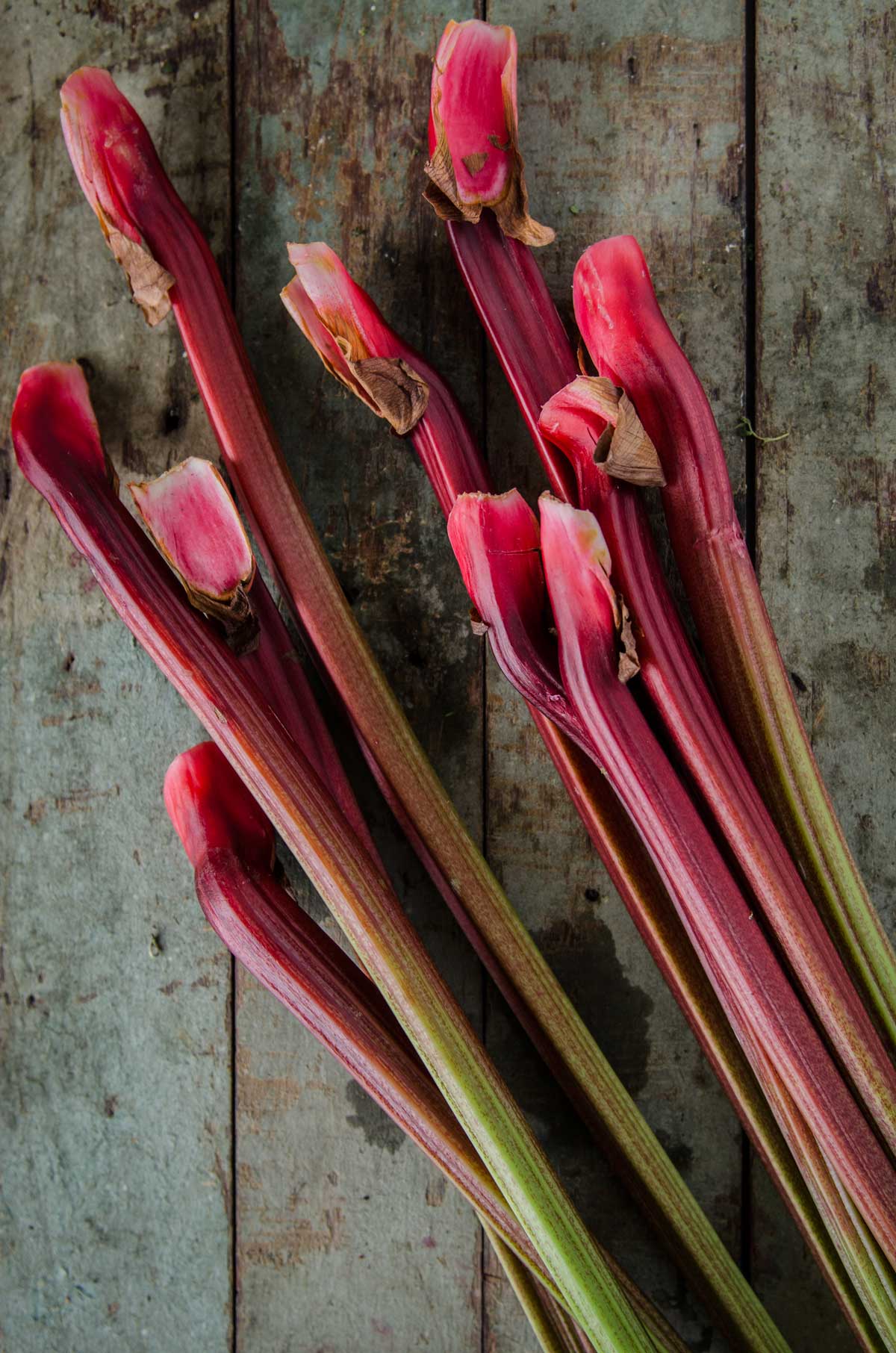 When looking at this bunch of rhubarb on my kitchen bench my mind instantly wandered to a roasted crumble. With it being summer in Sydney however, I needed to think beyond wintery comfort. I instead decided upon roasting the rhubarb and using it as the base flavour for an ice cream.

While I do have an ice cream machine, I rarely use it. Largely because when I feel like making ice cream I can’t be bothered making a custard and freezing the churn bowl. As a result, for the last few years I’ve adopted the no-churn method which uses condensed milk and thickened cream as the base and doesn’t require churning.

It’s no secret that maple syrup pairs beautifully with rhubarb, so by roasting the rhubarb with maple syrup and then puréeing it and combining it with toasted almonds this ice cream flavour was born. The rhubarb is added to the ice cream in dollops as it is layered into the dish, swirled slightly with a flourish. This results in icy swirls of rhubarb puree amidst the creamy ice cream which is dotted with toasted almond slivers. 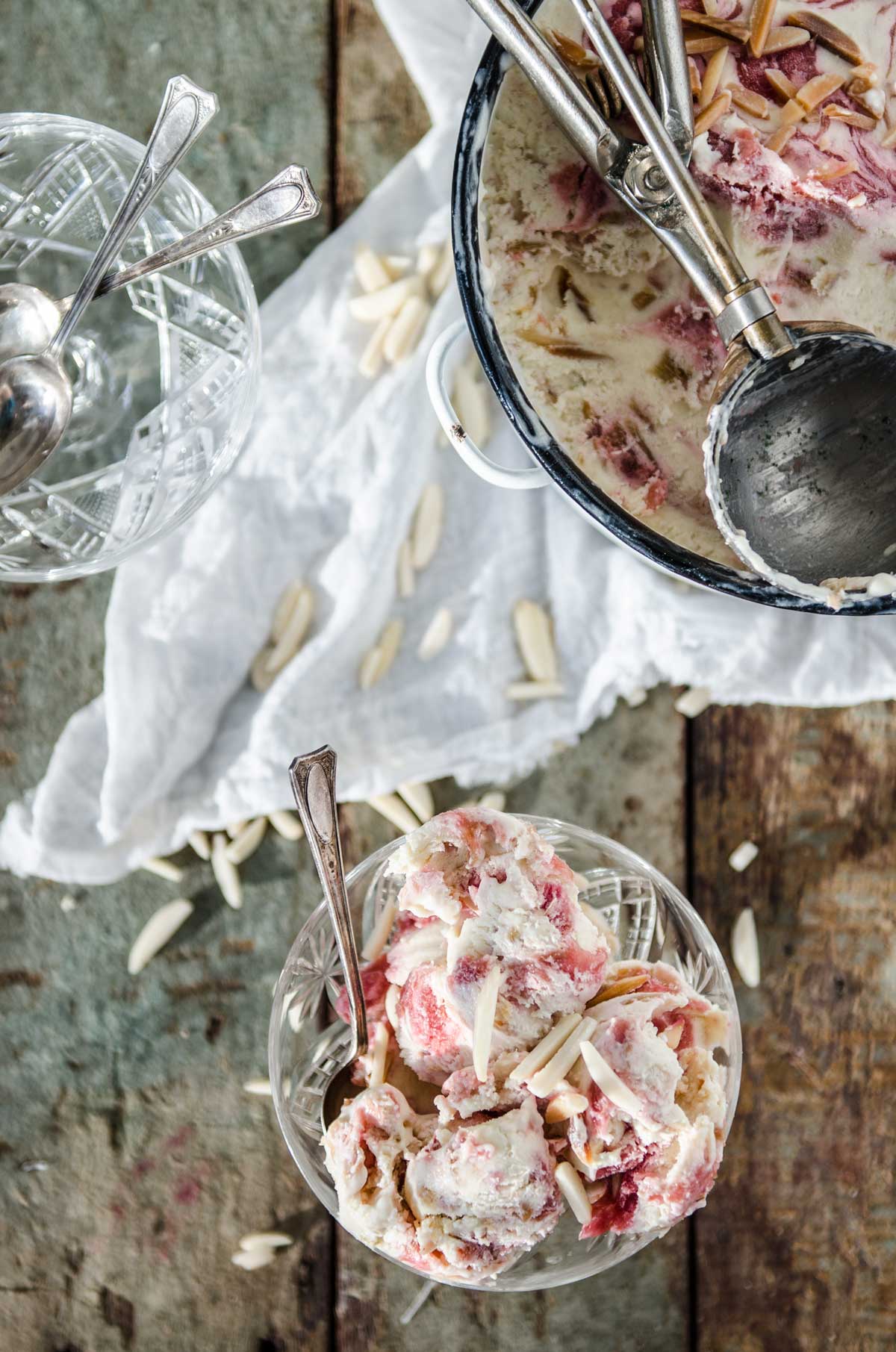 Cut the rhubarb up into finger sized pieces and place in a bowl with the sugar and maple syrup, tossing well to combine. Place the rhubarb in an even layer on a paper lined baking pan and bake for 20 minutes until softened. Transfer the mixture to a food processor and blend until pureed. Set aside.

Add 1/3 of the cream mixture into your ice cream container, then top with 1/3 of the rhubarb puree and swirl it around with a skewer, repeat with remaining cream and puree ending with the puree swirled on top. Freeze until solid.

20-30 minutes before you are ready to serve the ice-cream, remove it from the freezer to softened enough to scoop. 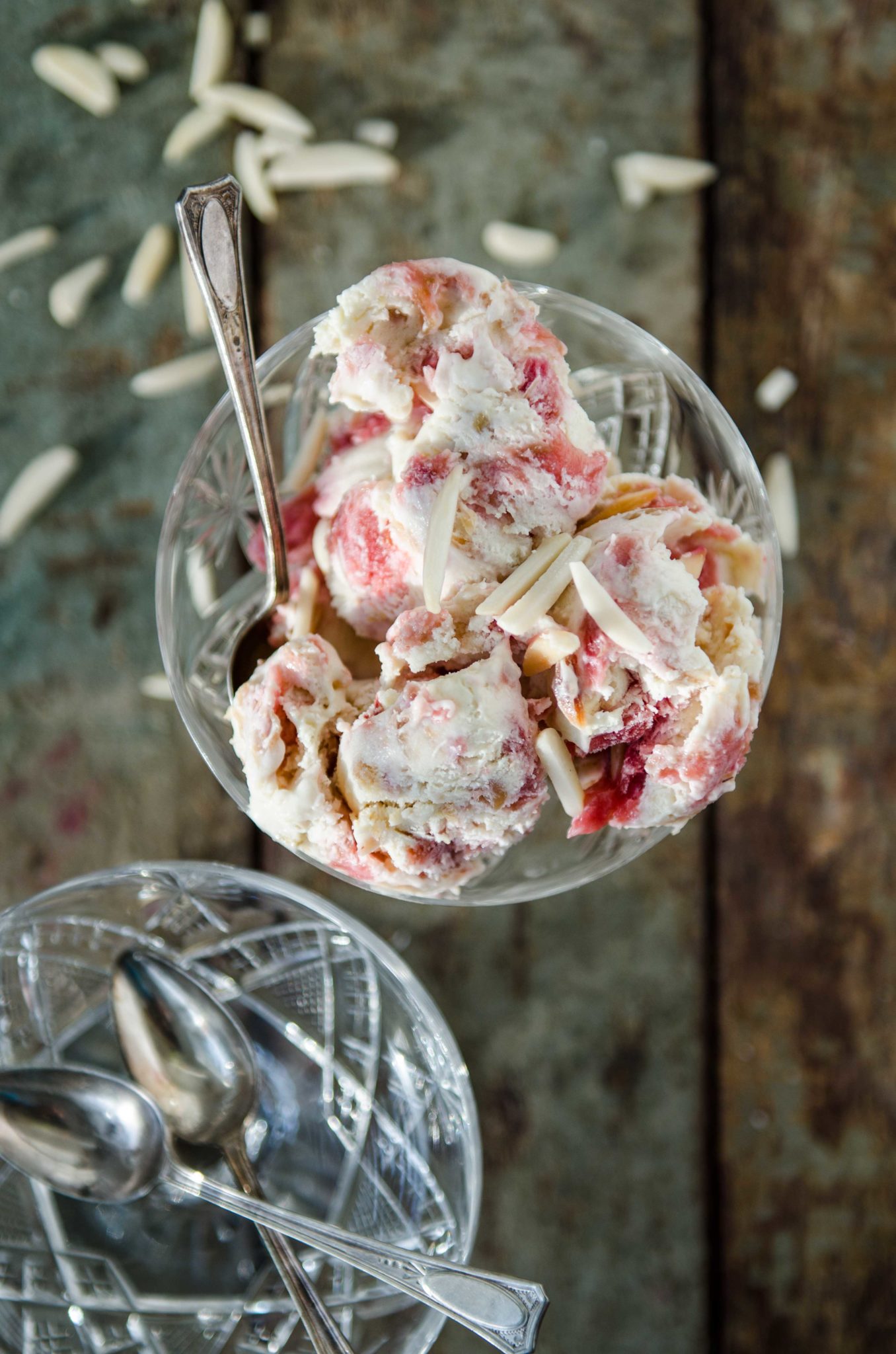 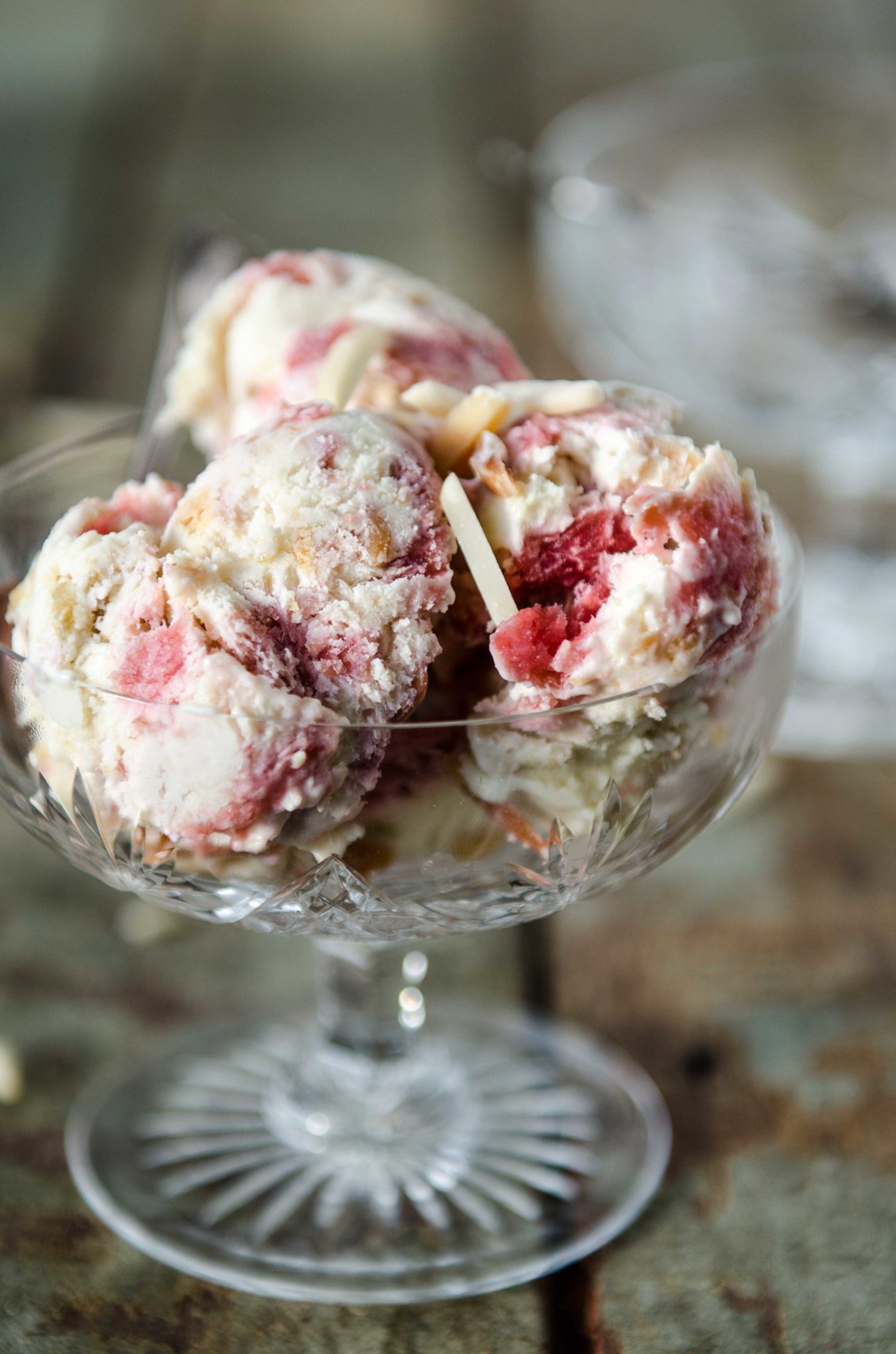