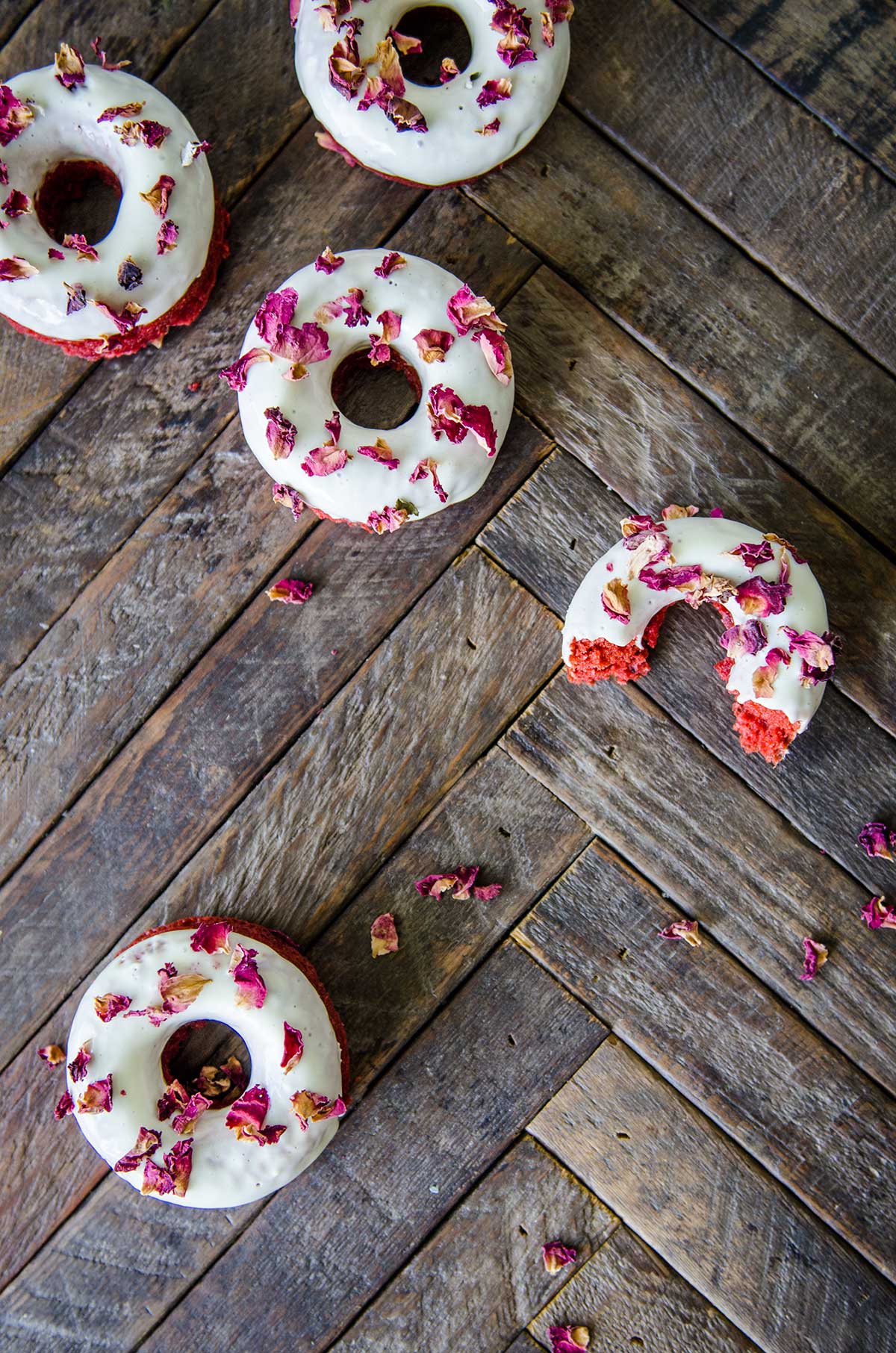 If red food colouring is the official stamp of Valentine’s Day themed treats, then edible rose petals have got to be the mark of Saint Valentine himself. So, when planning this year’s love-filled post for you this year, I just had to use both and created Valentine’s Day red velvet doughnuts with a cream cheese glaze and edible dried rose petals.

2016 is definitely the year of love for Scotty and I, because after 7 years together we are declaring our love to the world and getting married. I seem to have suddenly developed a schmalzy side when it comes to matters of the heart as a result of our impending nuptials. While part of me cringes at it, the other part requires that I absolutely get on board the Valentine’s Day train this year and create a recipe for you all to make for your loved one.

These cake doughnuts are far better for you than deep fried doughnuts and are as light as air thanks to the combination of cake flour (don’t worry my Australian comrades, even though we can’t buy cake flour in Australia, it’s a simple mix of plain flour and cornflour), buttermilk ( I have a hack for that too if you don’t want to buy a whole carton) and whipped egg whites. 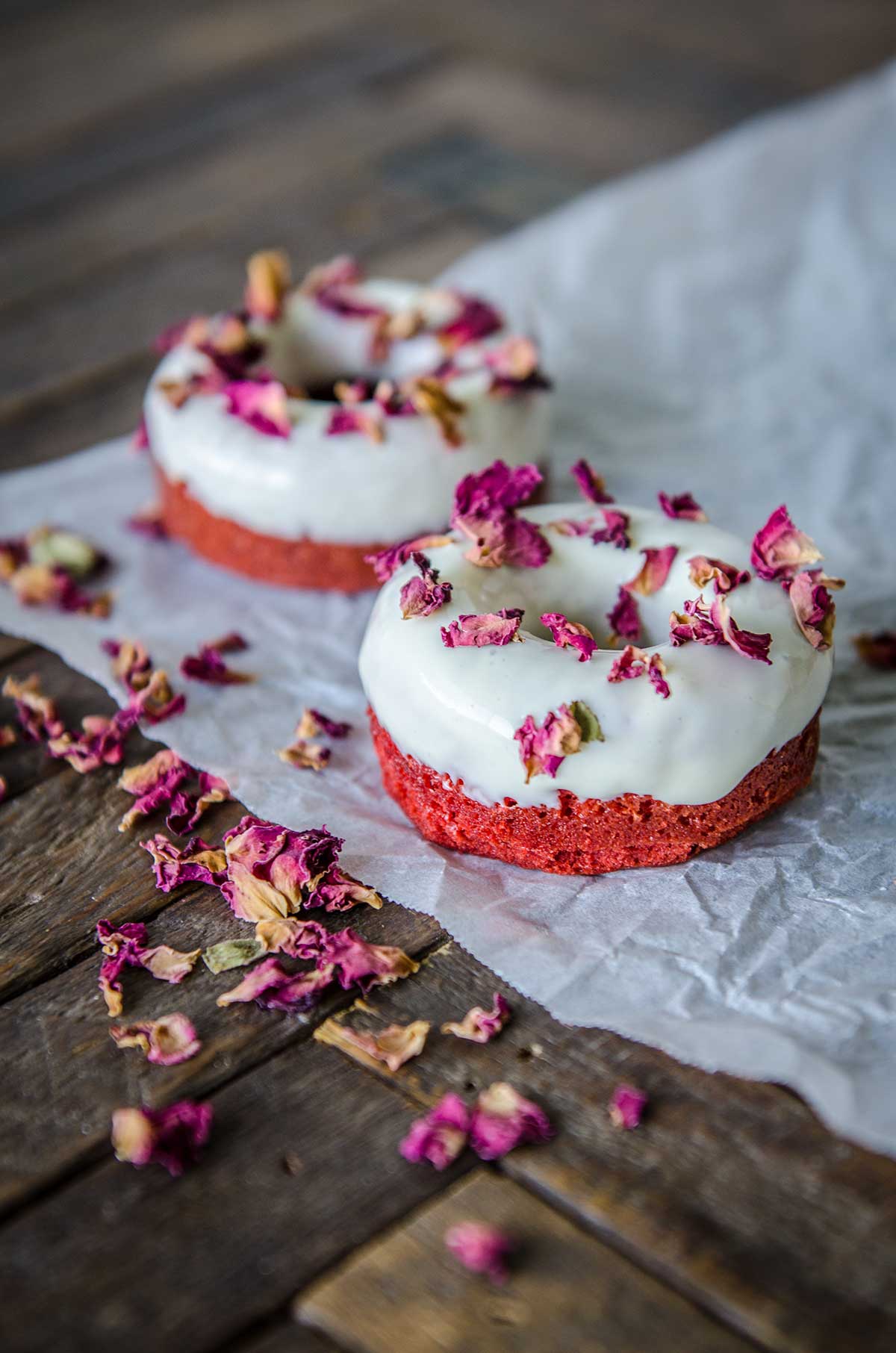 Red velvet treats wouldn’t be anything without the cream cheese topping. Not being one to break with a tradition that isn’t broken so doesn’t require fixing… the glaze is simply cream cheese, icing sugar and milk which complements the cake doughnut spectacularly.

The edible dried rose petals add another dimension to our Valentine’s Day theme, but more than that – they actually taste in sync with the red velvet and cream cheese flavours. A big bag of these beauties made their way to my doorstep a little while ago – a gift from the iconic Essential Ingredient stores here in Australia. I knew they were too wonderful to use in just any dish, so I’ve been waiting for the right time to use them. 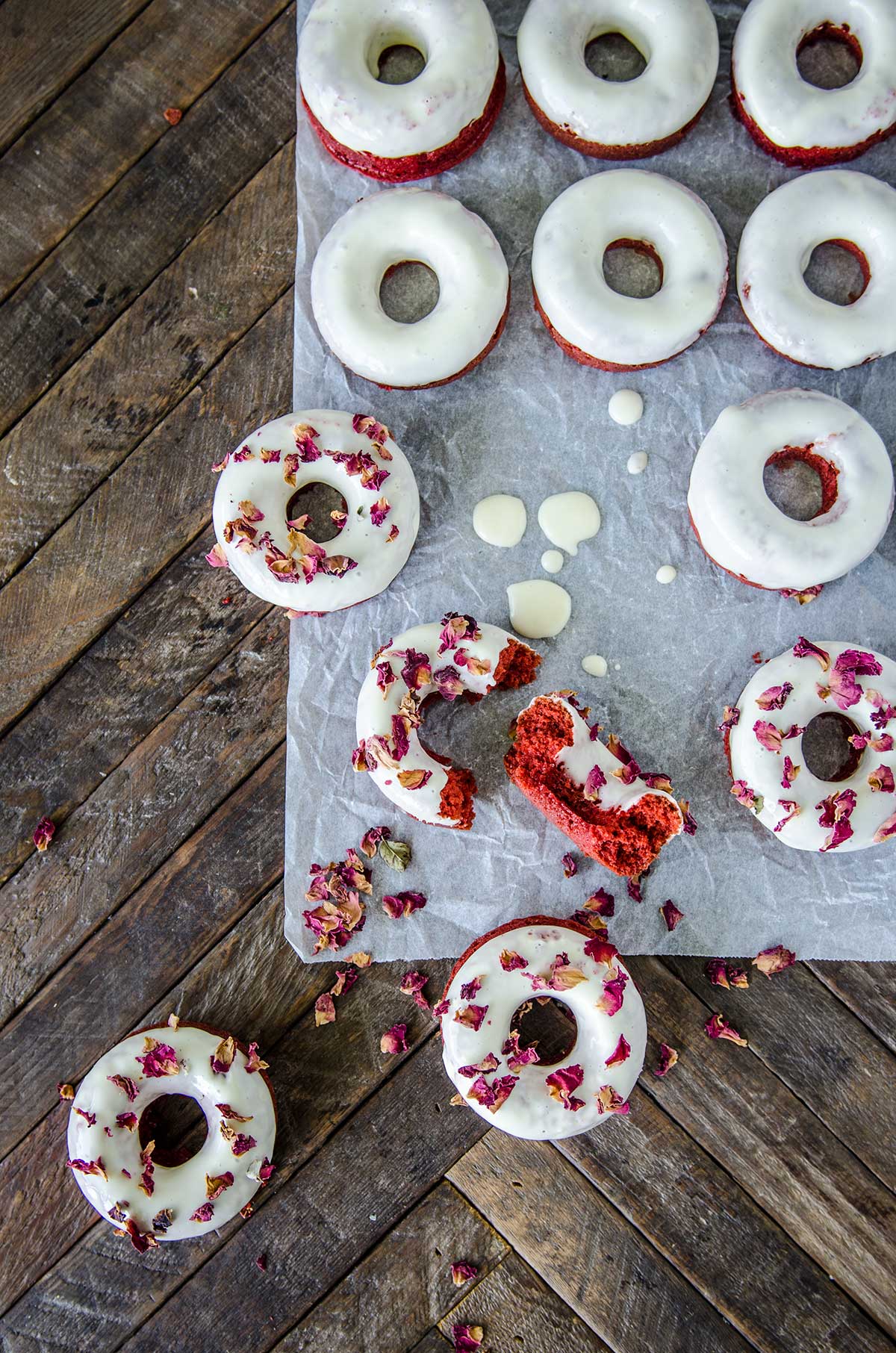 There’s nothing more to say really other than, despite being on a diet so I can fit into my wedding dress, I seem to have inhaled more than my fair share of these doughnuts. I am eagerly awaiting Scotty’s arrival home so that I can give them to him… do you think he’ll notice if there is a big bite taken out of the handful I have left? 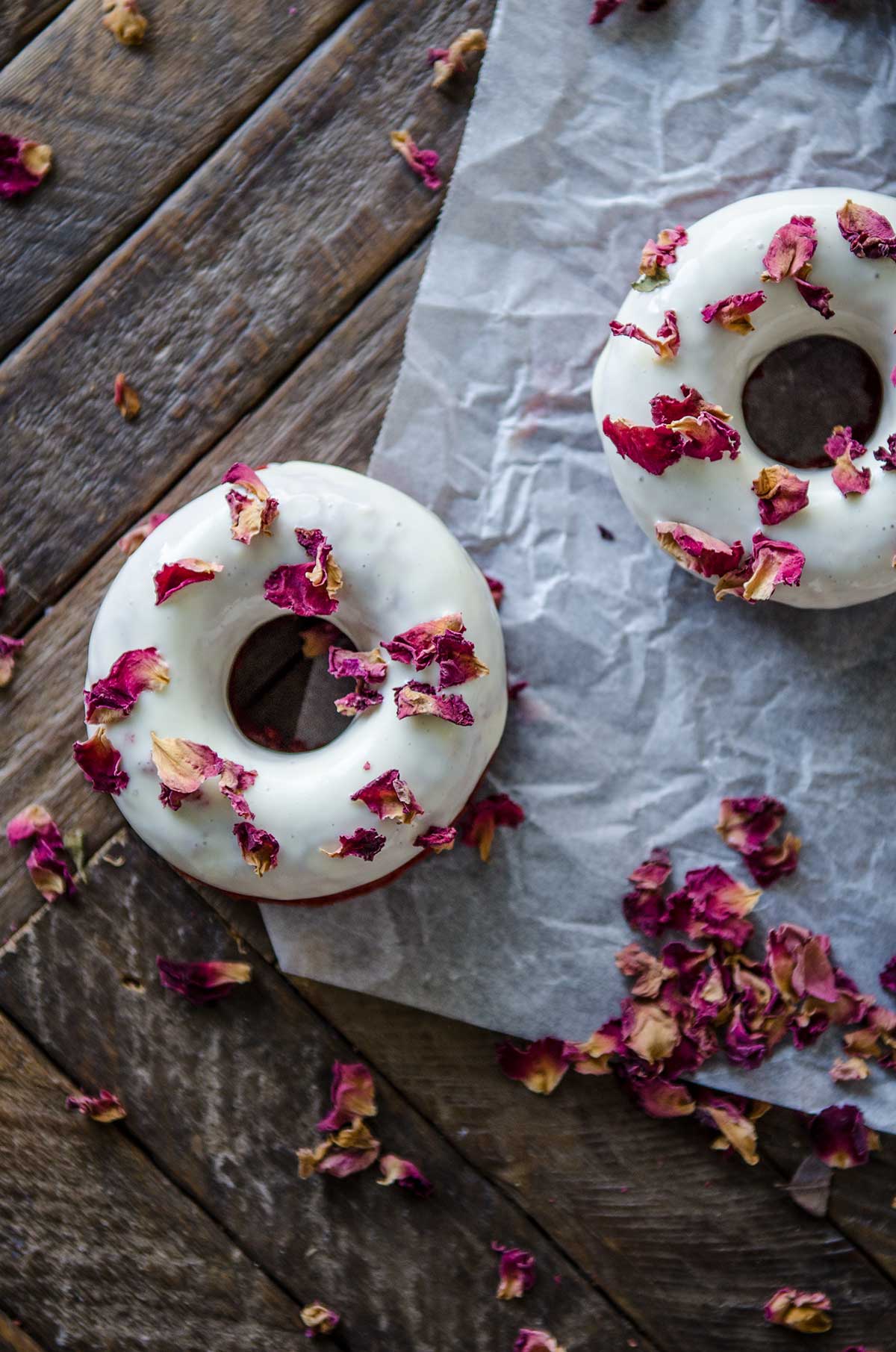 In a small bowl combine the milk and the lemon juice and set aside. In another bowl sift together the flour, cornflour, bicarb soda, cocoa powder and salt and set aside.

Separate the egg yolks from the whites. Beat the egg whites with a hand mixer until soft peaks form and then set aside.

Cream together the butter and sugar with your hand mixer on high until pale and creamy (should take between 5-8 minutes). Add the oil and then beat again for a few minutes. Add the egg yolks and the vanilla beans and mix until combined.

Add red food colouring until the batter is a vibrant red (the food colouring paste is better as it won't thin out your batter but you can use liquid colourings if that is all you have).

With your hand mixer on a low speed add the flour and the milk mixture alternating between each, and beginning and ending with the flour. Add the whipped egg whites and very gently fold into the batter, ensuring that you mix until just combined so that the batter remains light and full of air.

Take two non stick doughnut pans and spray them with oil. Fill each doughnut mold 3/4 full and bake for 17 minutes until the batter springs back in the centre when pressed. Remove from the oven and after a few minutes, gently remove from the molds. Set aside to cool completely.

To make the glaze, combine the cream cheese and sifted icing sugar in a bowl and beat on high for 2-3 minutes until smooth. Add the milk 1 tablespoon at a time, mixing between each addition, until you reach your desired consistency.

Dip the tops of the cooled doughnuts in the cream cheese glaze and sprinkle with dried rose petals. 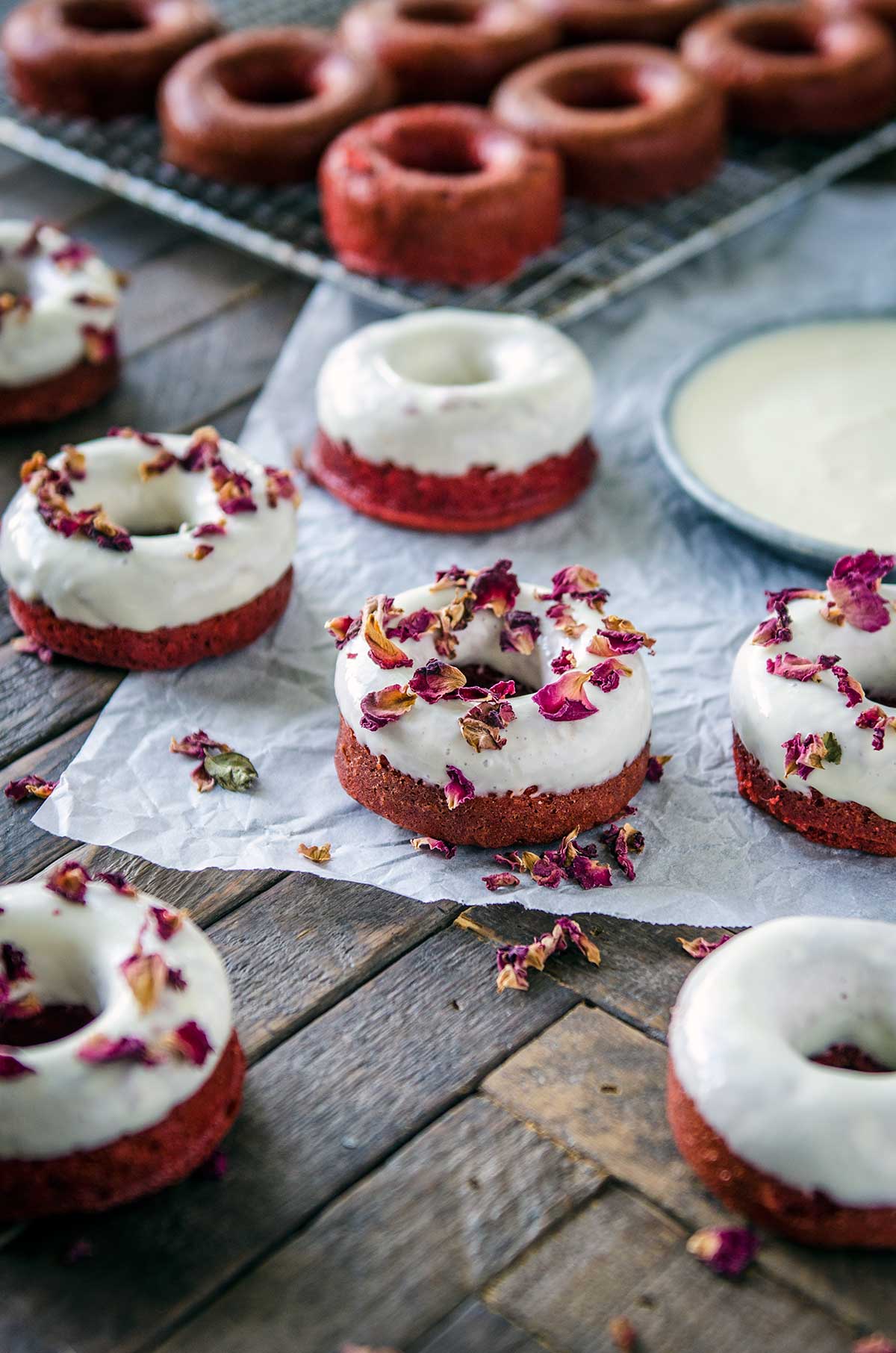