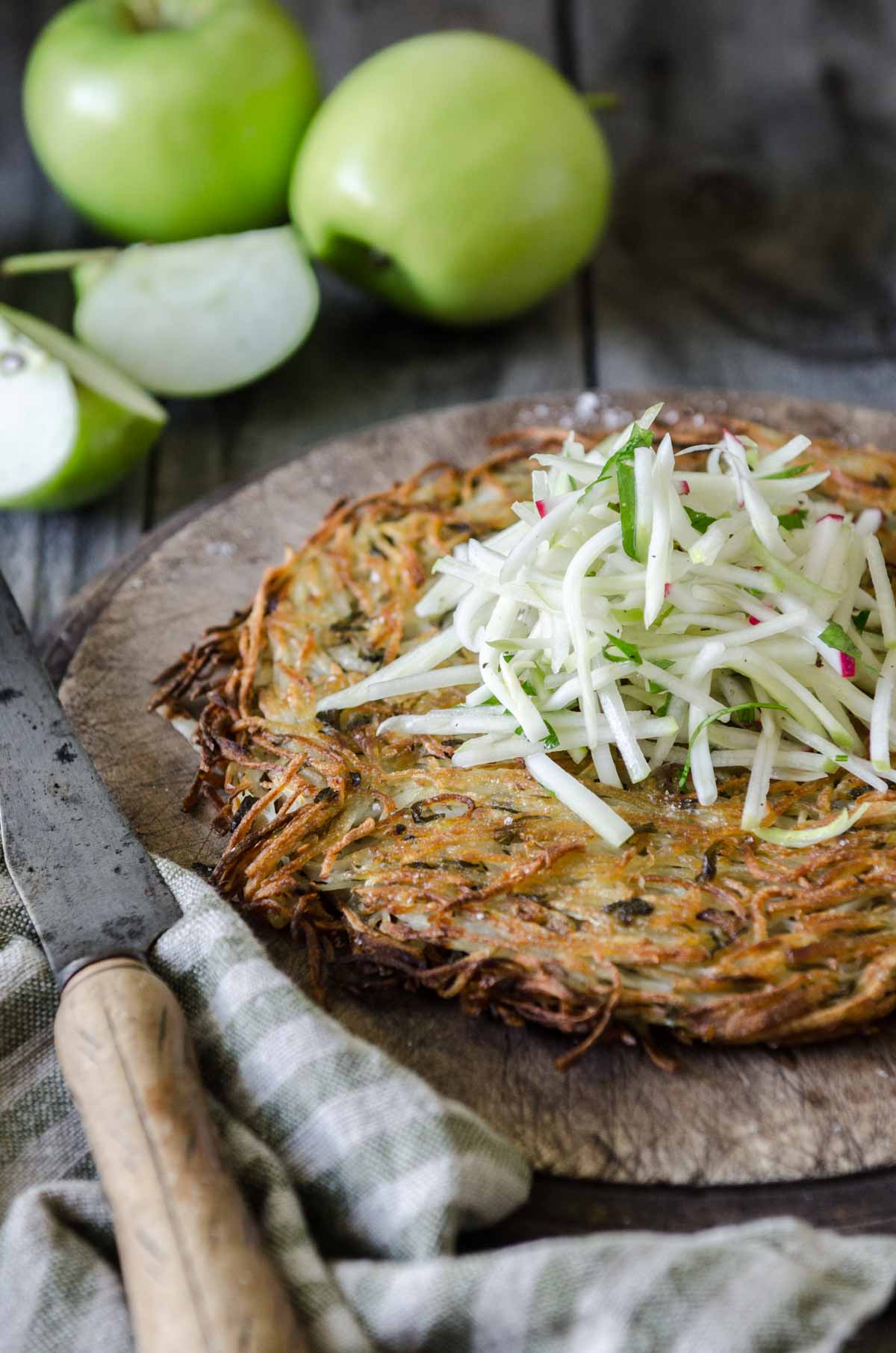 I’ve decided to take breakfast to the next level. It’s a long weekend here this weekend, so its the perfect opportunity to roll out of bed late and make yourself a shatteringly crisp on the outside yet fluffy on the inside potato rösti.

A potato rösti is the big brother of the hash brown. It is a swiss dish and its name exposes its intended result – crisp and golden. The potato rösti survives on potato alone with a little oil, butter or fat to bind it. While many swear by par-boiling the potatoes first, just as many don’t and for my recipe I’m omitting that step. Why? because if you julienne the potato with a mandoline, you don’t need to par boil them, and the result is extra crisp on the outside.

While the Kanzi apple variety became available last month in a limited season (try my Kanzi French Apple and Thyme Tart), the Greenstar apple has just been released this week – so I’ve been asked to share another recipe, this time featuring the Greenstar. The rösti might be the hero here, but the Greenstar apple and fennel slaw is most definitely the star. Given the buttery deliciousness that is the potato rösti, the apple slaw cuts effortlessly through the butteriness to deliver a rather incredible top note of freshness. This leaves you finishing the potato rösti feeling absolutely no guilt at all! 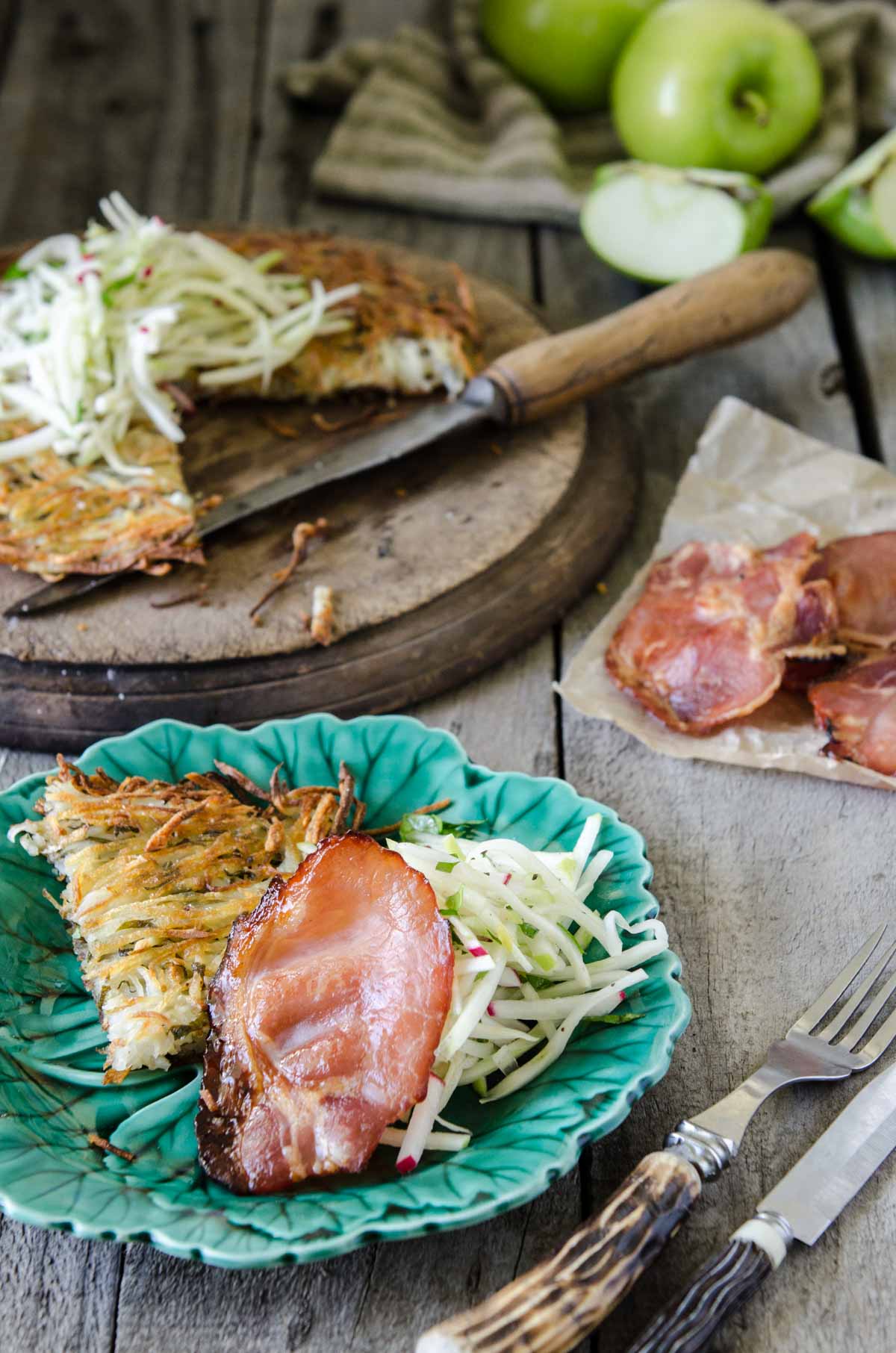 The Greenstar apple – a cross between a delbarestival and granny smith apple – is rather spectacular. Because it has a naturally high Vitamin C content it doesn’t brown and is perfect served raw and crisp. I conducted a little test to ensure this was not a false statement and after slicing some this morning, they were still white this afternoon when I happily munched on them!

Greenstar apples are out this week, so grab a few and make this over the ANZAC long weekend, it’s ultimate comfort food. If you can’t find Greenstar apples, or they are out of season, granny smith apples will work just as well but will need to be cut just before you serve the slaw. 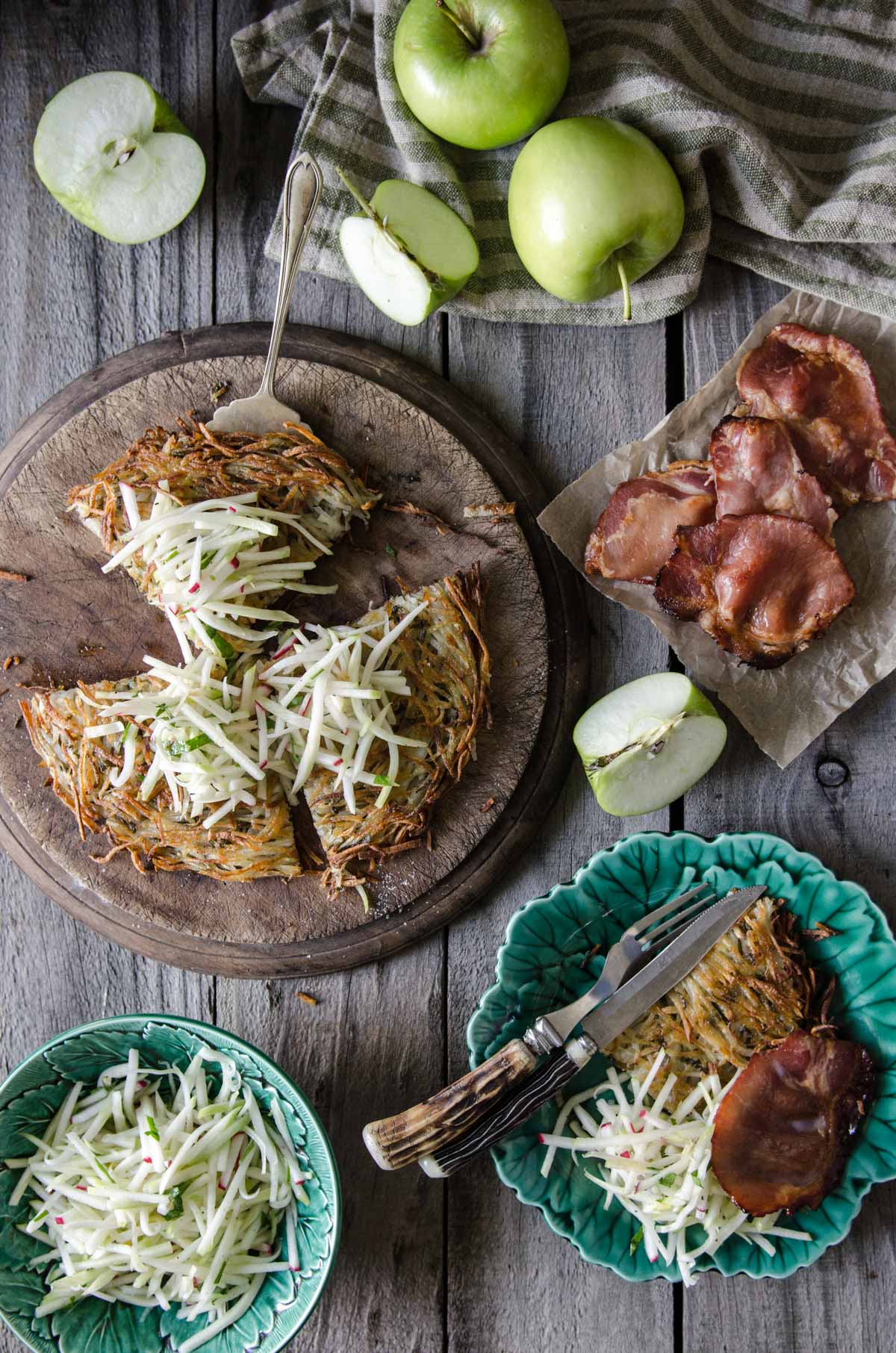 Fill a glass bowl half full with water and ice. Use a mandoline with the matchstick attachment to finely julienne your potatoes (or grate the potatoes). Place the matchsticks of potato in the ice water as you finish the remaining potatoes.

Place the potato in a bowl and add the butter and oregano, mixing with your hands till well combined. Season with salt and pepper if you are cooking the potatoes immediately.

You need to turn the rösti over, so if you are confident flip it in the air, but if not (like me) place a plate over the frypan and turn the frypan over to overturn the rösti then slide it back into the pan. Place it back in the oven for another 5 minutes, then remove from the oven and set aside to cool slightly.

While the rösti is cooking in the oven prepare the apple and fennel slaw. To do this use your mandolin to create matchsticks of apple (mandolin both sides of the apple until you reach the core), fennel and radish. If you don't have a mandoline you can do this by hand.

Mix the apple, fennel and radish with the remaining ingredients and toss to combine. Serve the rösti with the apple slaw and some maple roasted bacon.*

*To make the maple roasted bacon, line a baking tray with paper and brush the paper with 1 tablespoon of maple syrup. Top with rashers of bacon, and brush the tops with another tablespoon, then bake on a high heat until golden. 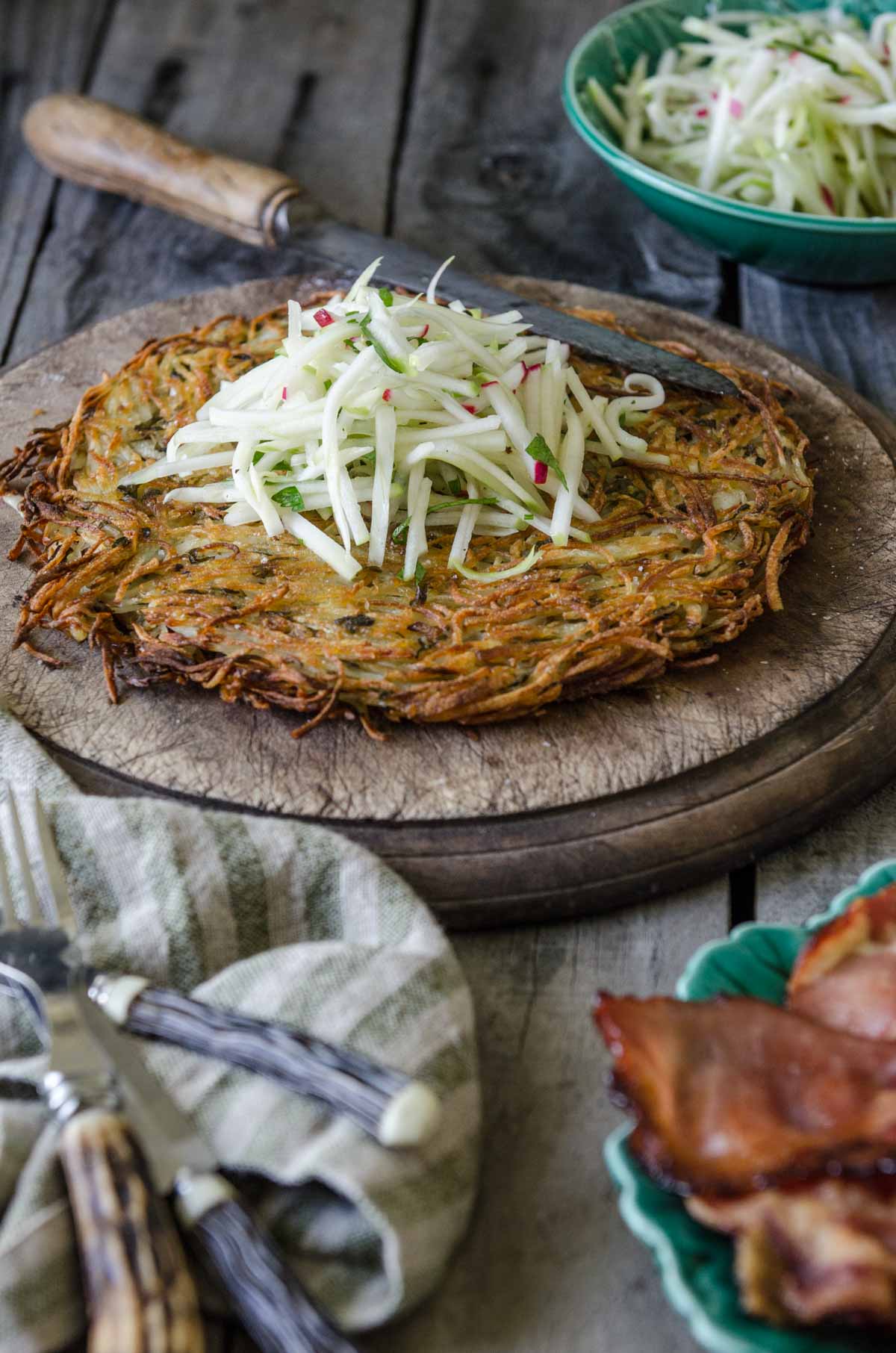 Chew Town would like to acknowledge its partnership with Greenstar Apples for this post. You can read Chew Town’s disclosure statement here for more information on brands that Chew Town chooses to work with and why. The recipe above was created, developed and photographed by Chew Town using Greenstar Apples. Greenstar Apples can be found in Australia at Woolworths, Costco, IGA Australia, Aldi Australia and specialty growers.