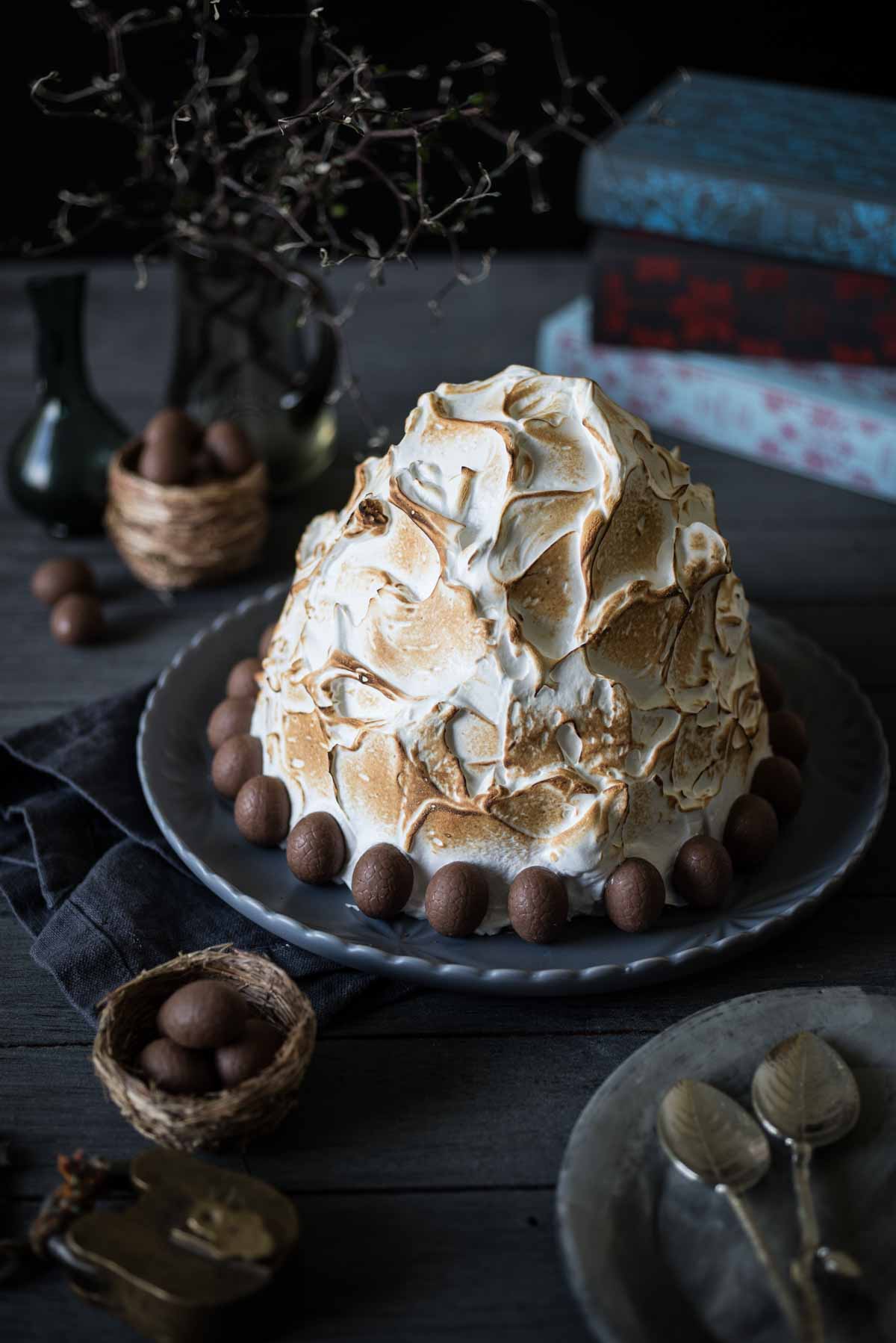 Easter is a time of year I look forward to most. Firstly, the weather is perfect in Australia as we transition from Summer into Autumn. Secondly, it is one of the rare times that our family is all together because usually half of us is based in Sydney and the other half in Perth. This year the Sydney contingent (my sister’s family and Scott and I) are headed to Perth for a much needed West Australian visit. We arrive Good Friday, and while the whole time will be filled with great company, conversation and food, Easter Sunday lunch is where my family really excels.

This year, I’ve got something a little special planned, this Easter Egg bombe alaska. Complete with a fluffy torched meringue exterior, a super quick chocolate sponge base, and the quickest and easiest no churn ice cream recipe I’ve ever found. The best thing? Well, while this Easter themed bombe alaska is surrounded by a ring of solid chocolate eggs in the base, when you cut it open it reveals a secret egg centre – made from no churn orange and coconut ice cream! 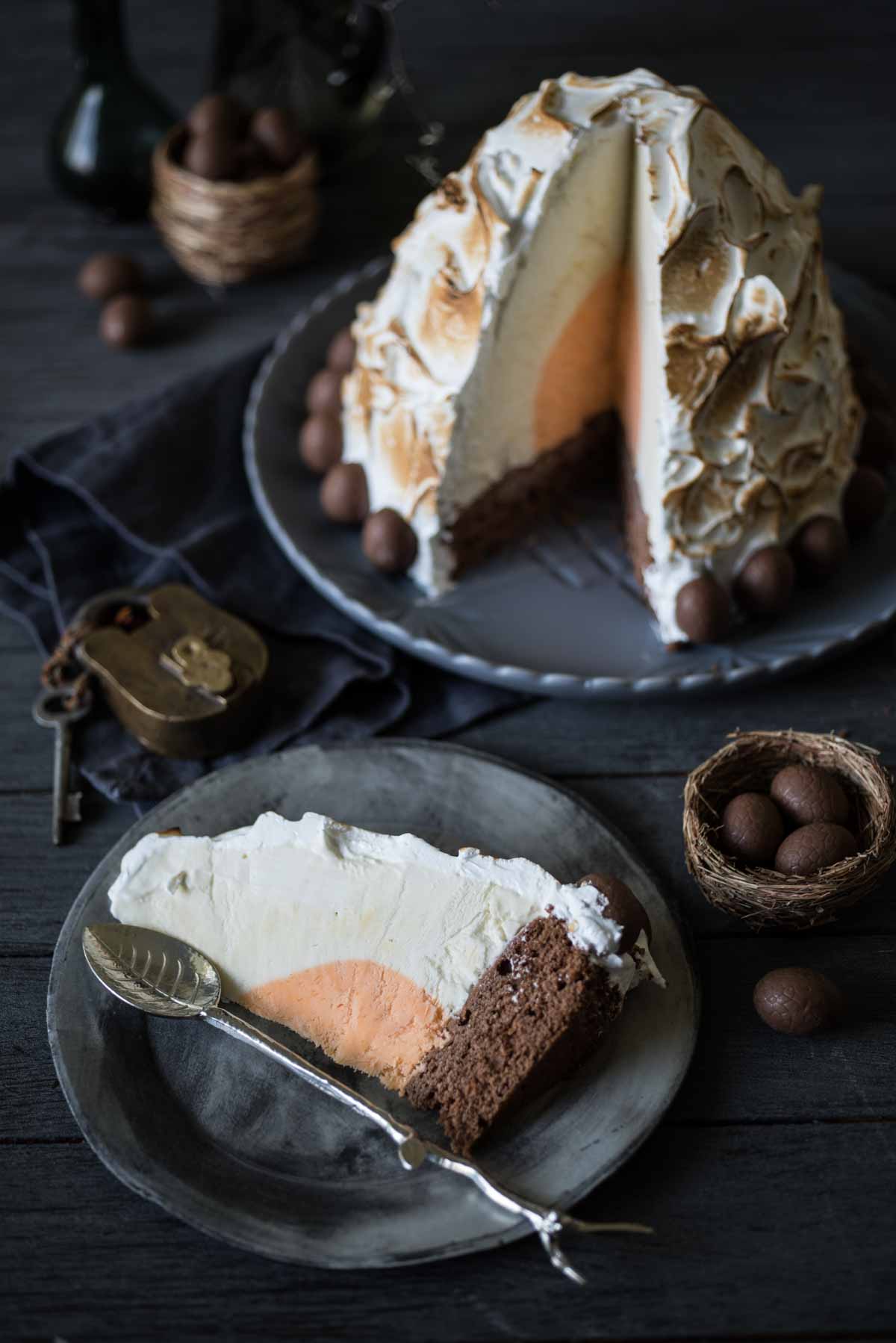 I promise you it looks a lot harder than it is and while there are a few elements involved, I’ve broken it down for you in the recipe so it’s easy to follow. Also, the ice cream is insanely easy – which makes it easier! Three ingredients for both ice creams and a little bit of time is all you need. I also used a Dolly Varden tin as the mold (the sort you use to make those kids party doll cakes where the dress is the cake) because I wanted the bombe Alaska to have an egg shape, but you could quite easily use a large metal bowl.

The key to the egg coloured inside, is to make the orange ice cream first, and freeze it in a tea cup for a couple of hours. Once that is done, you make the coconut ice cream, pour it into the metal bowl or mold, and then push in the frozen orange ice cream centre. But, I’ll walk through all that in the recipe.

The meringue I’ve used is a swiss meringue because I find it is the most robust meringue you can make. It hardly ever fails if you measure the egg whites and sugar properly on a set of scales first. All these tips and more in the recipe below. 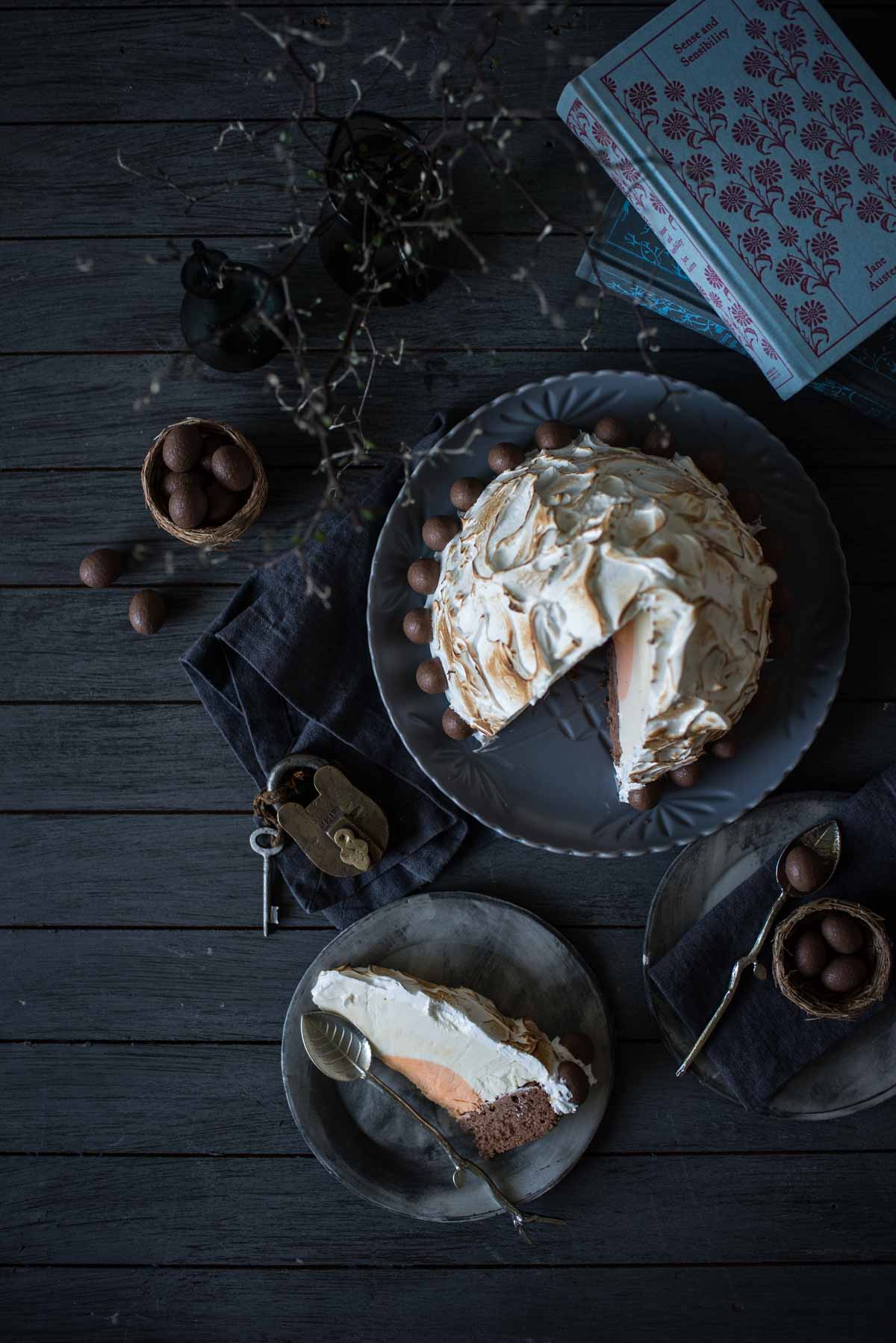 Start by making the orange ice cream centre. To do this, combine the orange zest, juice and sugar in a bowl and stir until the sugar is dissolved. Once dissolved, add the thickened cream and whip until soft peaks form. Transfer the mixture to a tea cup lined with cling film (so you can pull the ice cream out of the mold easily when it is set). Transfer to the freezer for 2 hours or until set enough to remove from the mold.

To make the chocolate cake, preheat oven to 180° Celsius. Beat butter and caster sugar together until pale and creamy. Add the cocoa powder, and then the eggs individually, beating well after each addition. Add the flour and milk alternately a third at a time, beating between each addition and starting and ending with flour. Stir in lightly to combine. Transfer to a greased non-stick jelly roll pan (or baking tray) and bake for 12 minutes, or until cooked through. Remove and cool completely, then cut two circles from the cake the same size as the bottom of the mold. Stack them on top of each other and then push them into the base of the mold. If you freeze the cake in with the icecream, by the time you have finished spreading the meringue on the ice cream and have torched it to serve, the cake base will have defrosted.

You can complete everything and to this point and keep it in the freezer until the day you need to serve. This can be made a week in advance and kept in the fridge.

When ready to serve, make the meringue. To do this place a small saucepan with 1 inch of water over high heat and bring to the boil. Once boiling, turn down the temperature to a simmer. Combine the egg whites and sugar in a metal bowl that will fit over the saucepan of water (without touching) and place it over the saucepan, stirring constantly until the sugar dissolves completely. Pour the egg whites and sugar into a stand mixer, and whisk for 8 minutes until the bowl of the stand mixer has cooled and the mixture has increased in size.

Release the ice cream cake from the mold and place on a serving plate with the cake as the base. Spread the meringue over the top of the ice cream and torch the meringue lightly with a chef's torch. Place a ring of solid chocolate eggs around the outside and serve. Make sure you cut this at the table, because the secret egg centre is designed to be a surprise for your guests. 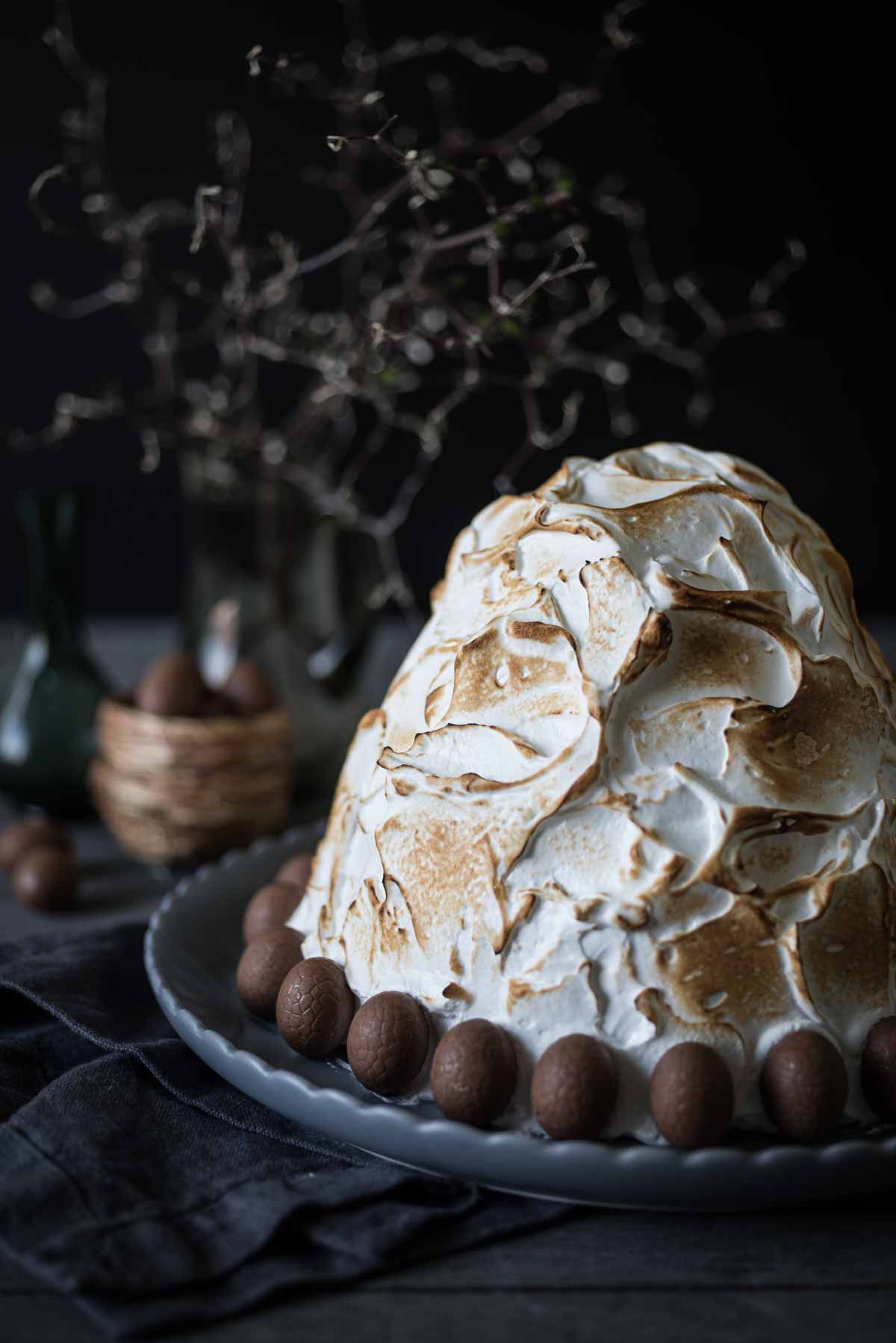 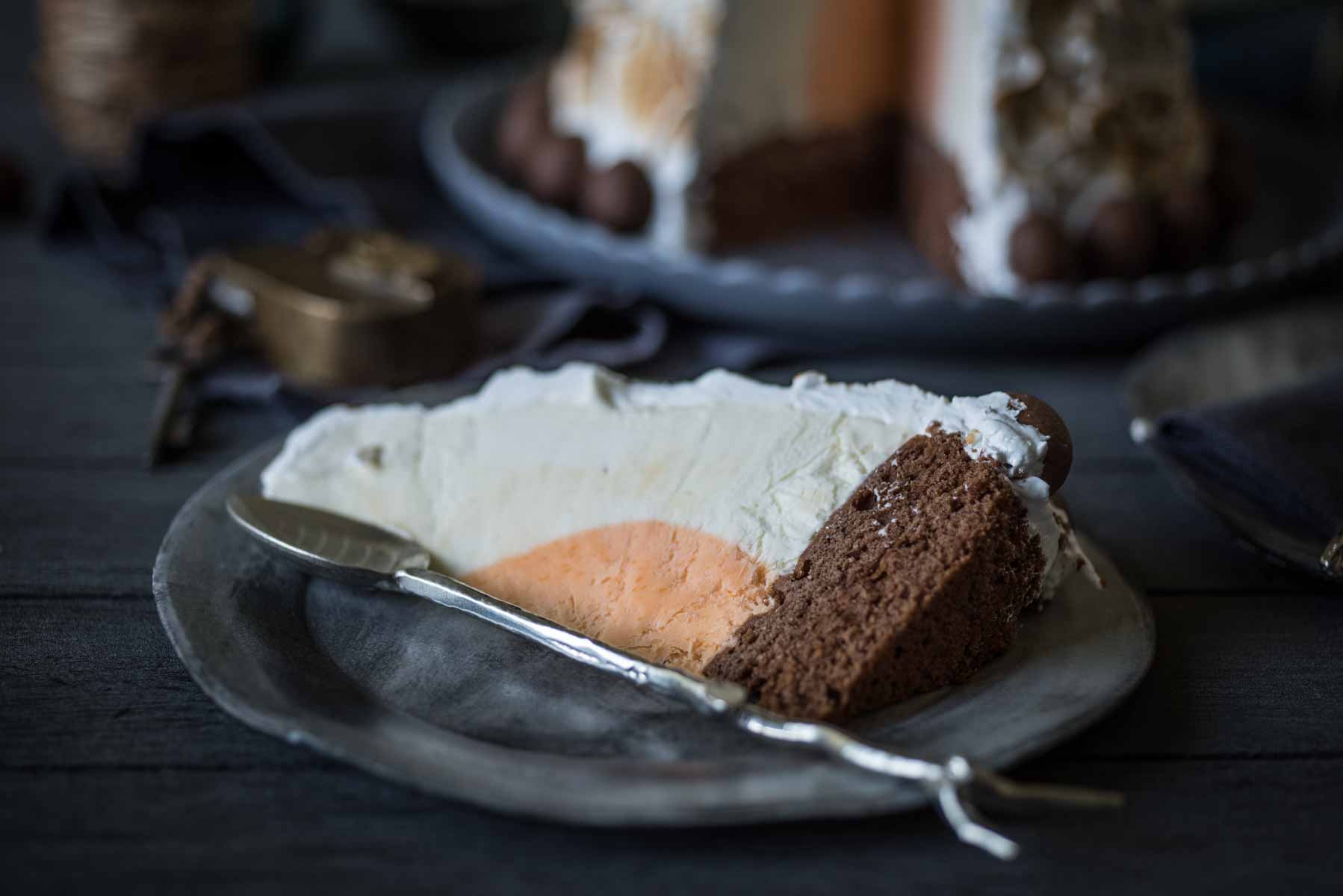