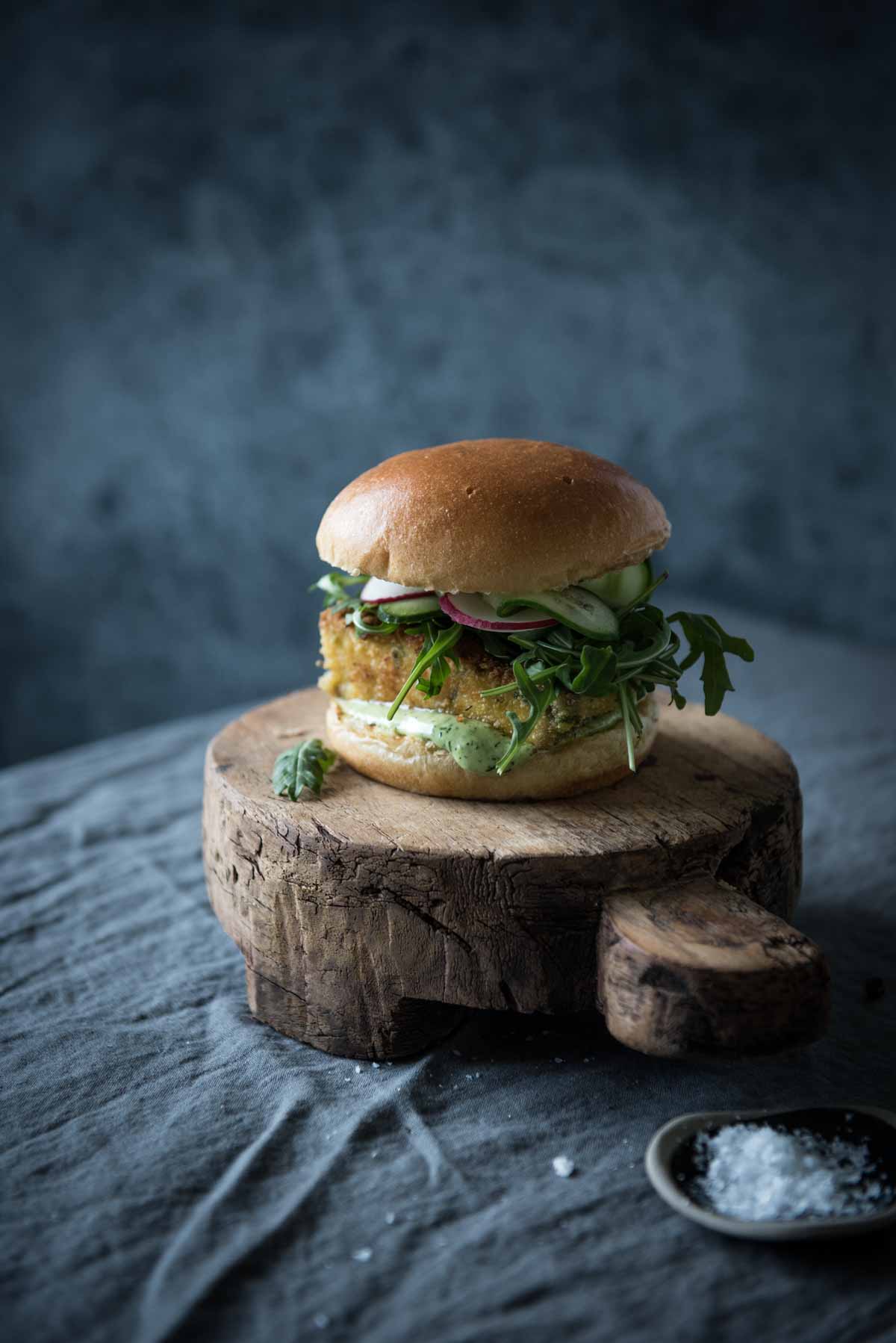 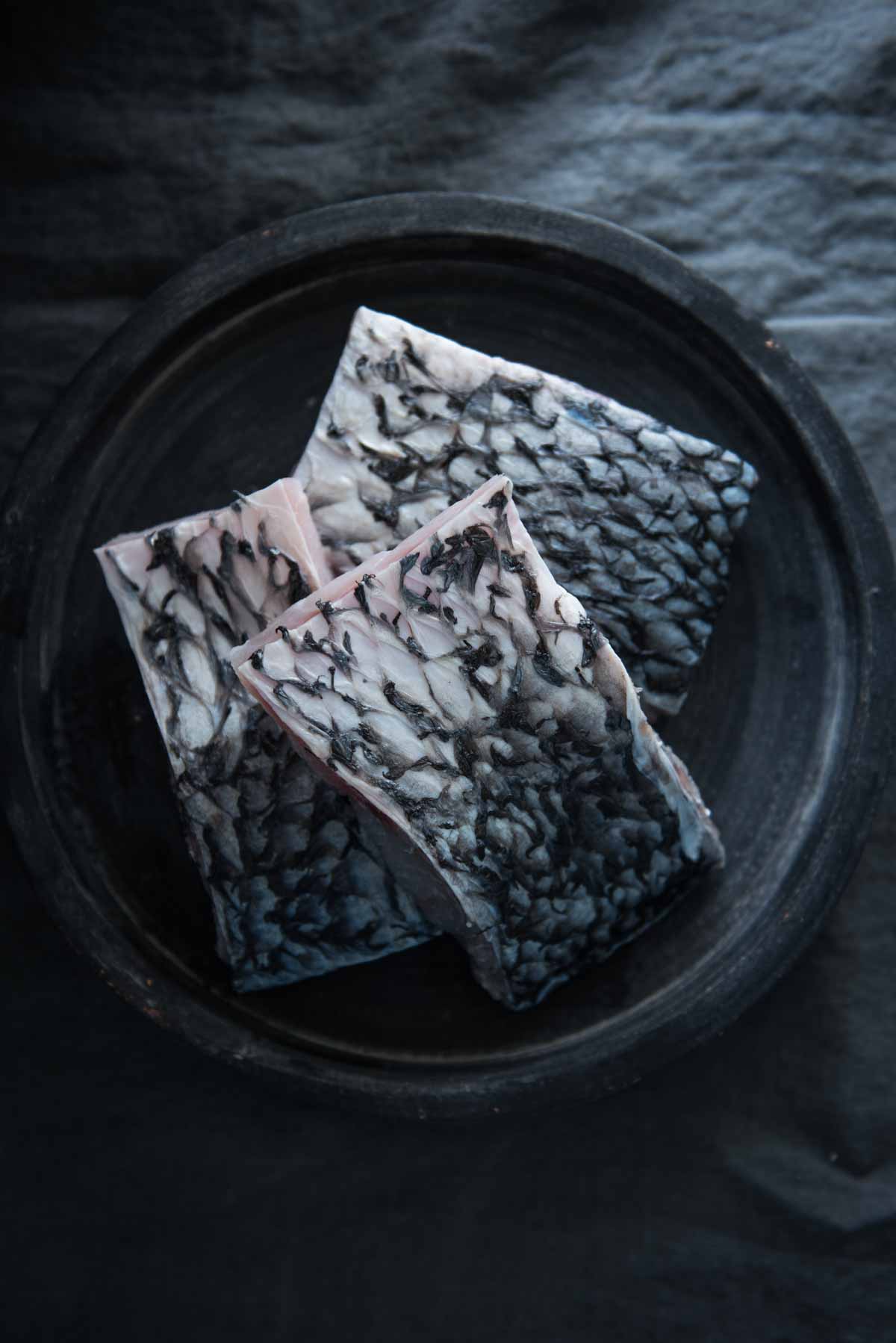 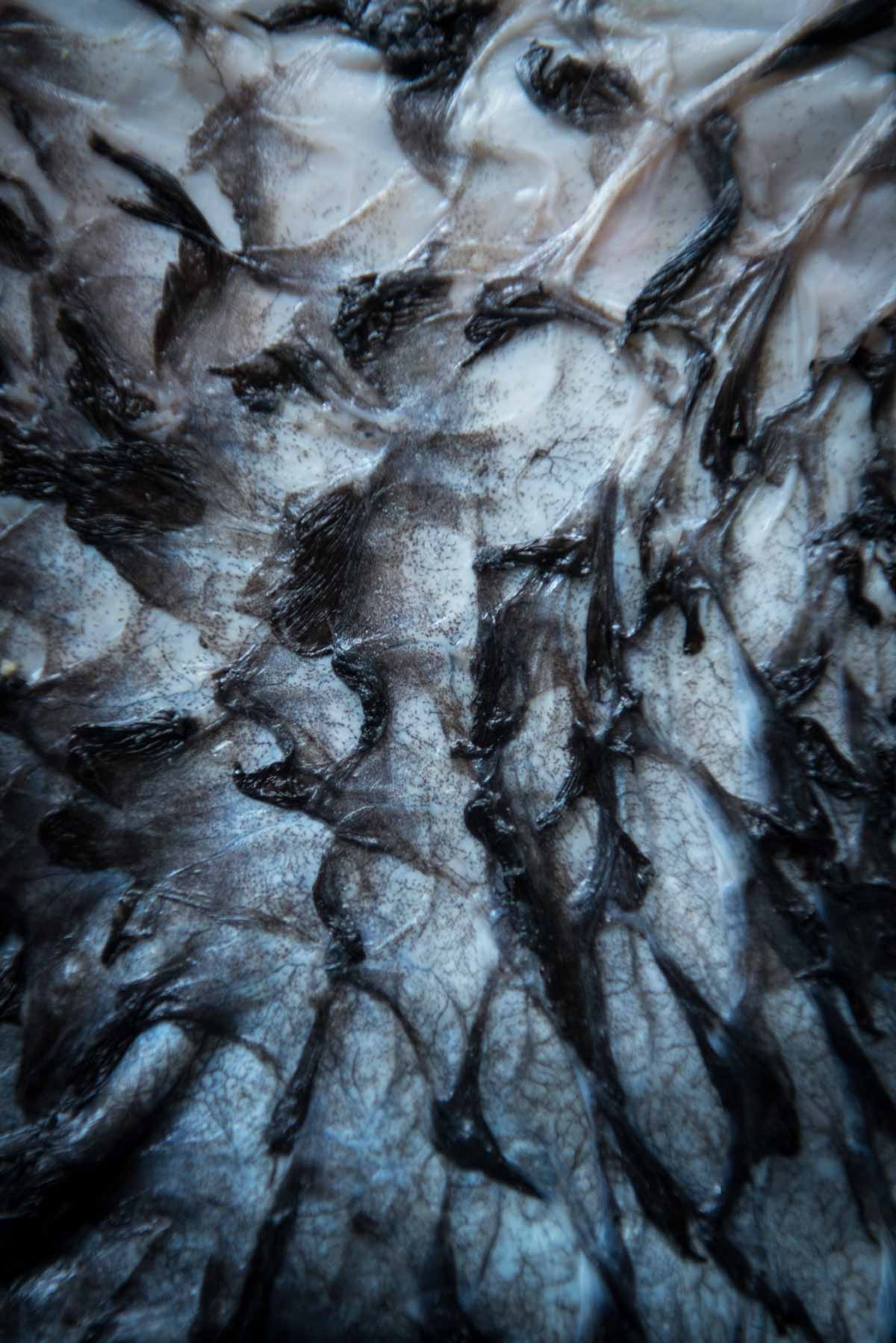 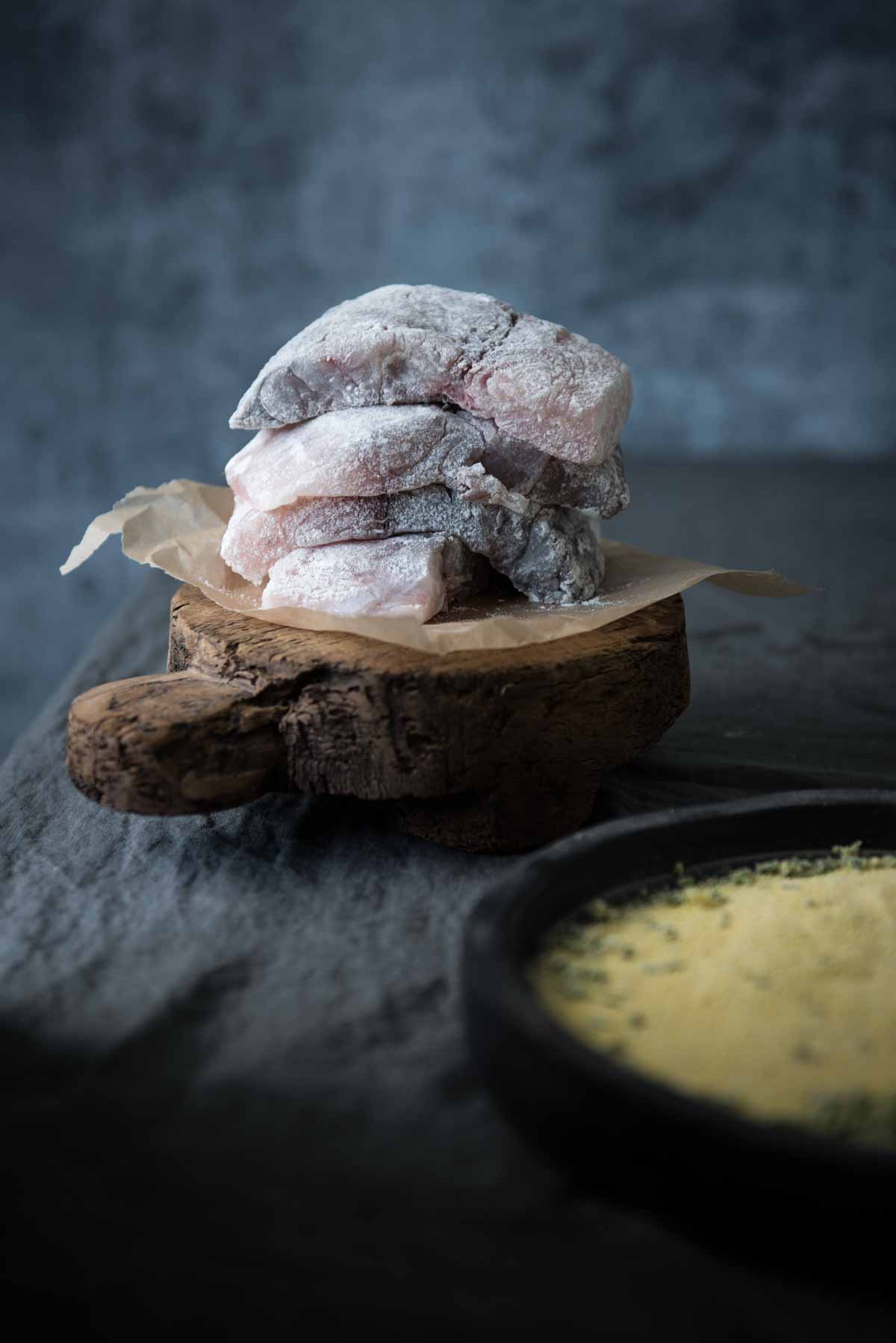 I’ve had a hankering for a fish burger lately. I’m not sure why because I’ve never really been a fish burger type of person. That is, until I made and met this barramundi fish burger – now I’m all over them. Turns out, I just needed the right fish burger.

For those of you outside of Australia, the Barramundi fish is also known as the Asian Sea Bass and is native to Australia and the Indo-Pacific region. The name Barramundi comes from the Aboriginal word meaning “large-scaled silver fish” and it is one of those wonderful “fishy-but-not-too-fishy” fish. It has a white flaky flesh, a fresh buttery flavour,  and is hard to over cook, staying juicy and delicious from first bite.

We have been enjoying Barramundi on menus here in Australia my whole life thanks to the Barramundi’s propensity to hang out in Northern Queensland. Outside of Australia it has recently begun rapidly growing in popularity as it is a hardy fish that lends itself to farming without the need for added hormones. 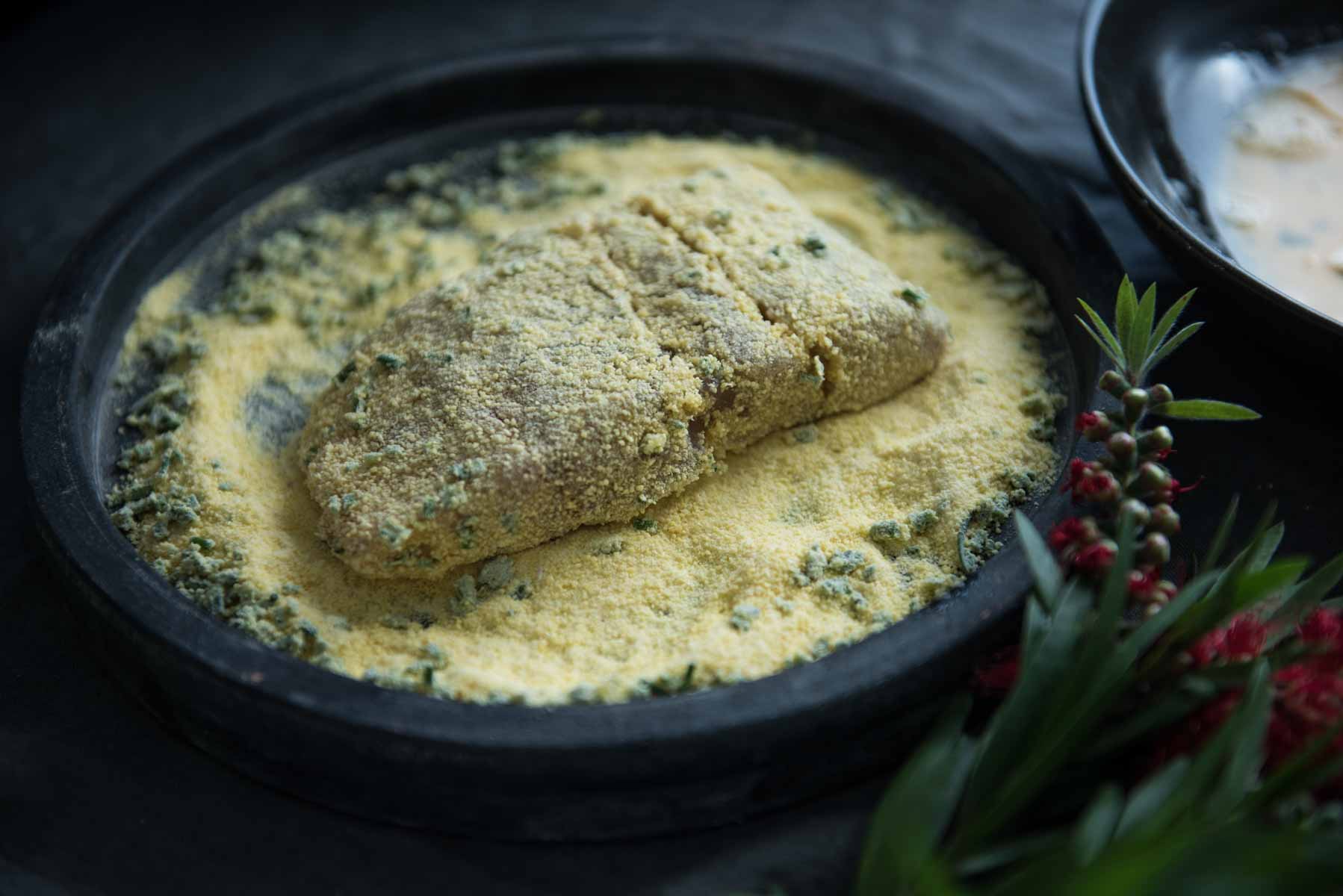 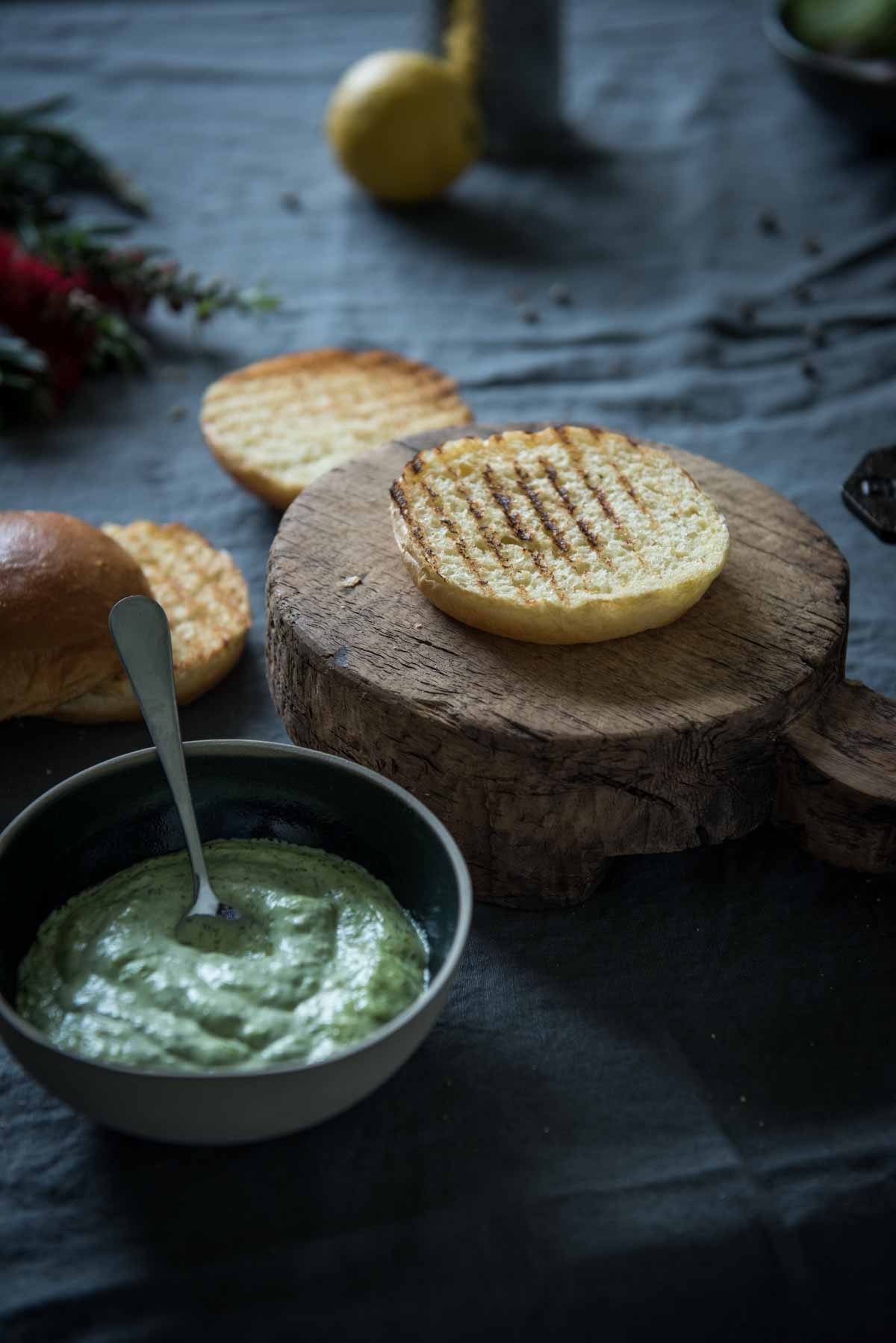 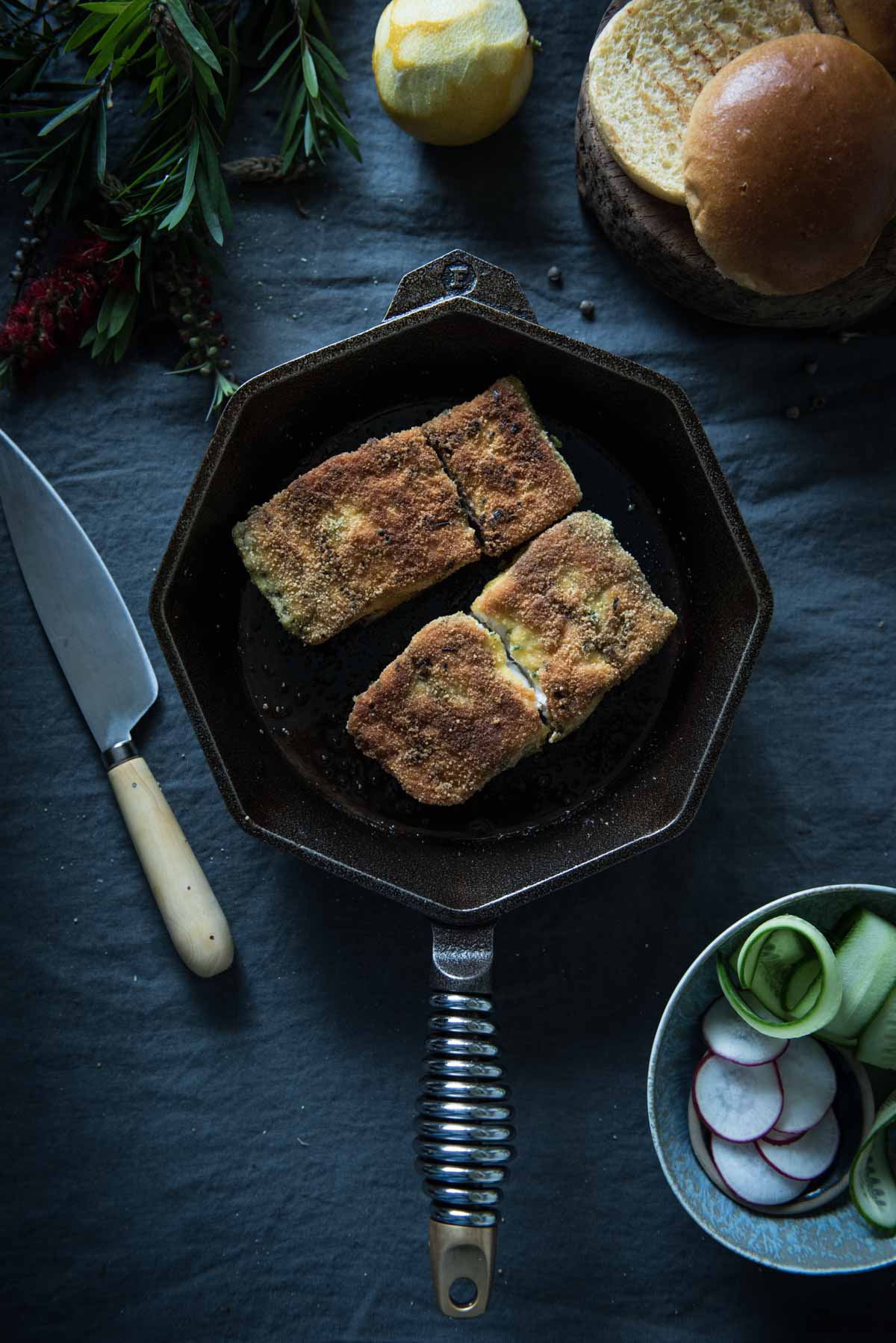 After buying four thick white Barramundi fillets and removing the skin (to fry up for a crispy treat later) I knew I wanted to use a cornflake crumb before frying. Cornflake crumb turns incredibly golden and crisp after shallow frying and is the perfect texture in a soft brioche bun burger. I’ve been using it to crumb stuffed jalapeños for ages and find the texture more crisp than breadcrumbs.

Served on soft brioche buns spread with a dill and chive aioli, this barramundi fish burger is dressed simply with wild rocket leaves, cucumber ribbons and radish slices. That is all it needs. The juicy buttery fish fillet with a bright herbed sauce surrounded by crisp vegetables packs more flavour than a burger loaded with ingredients. 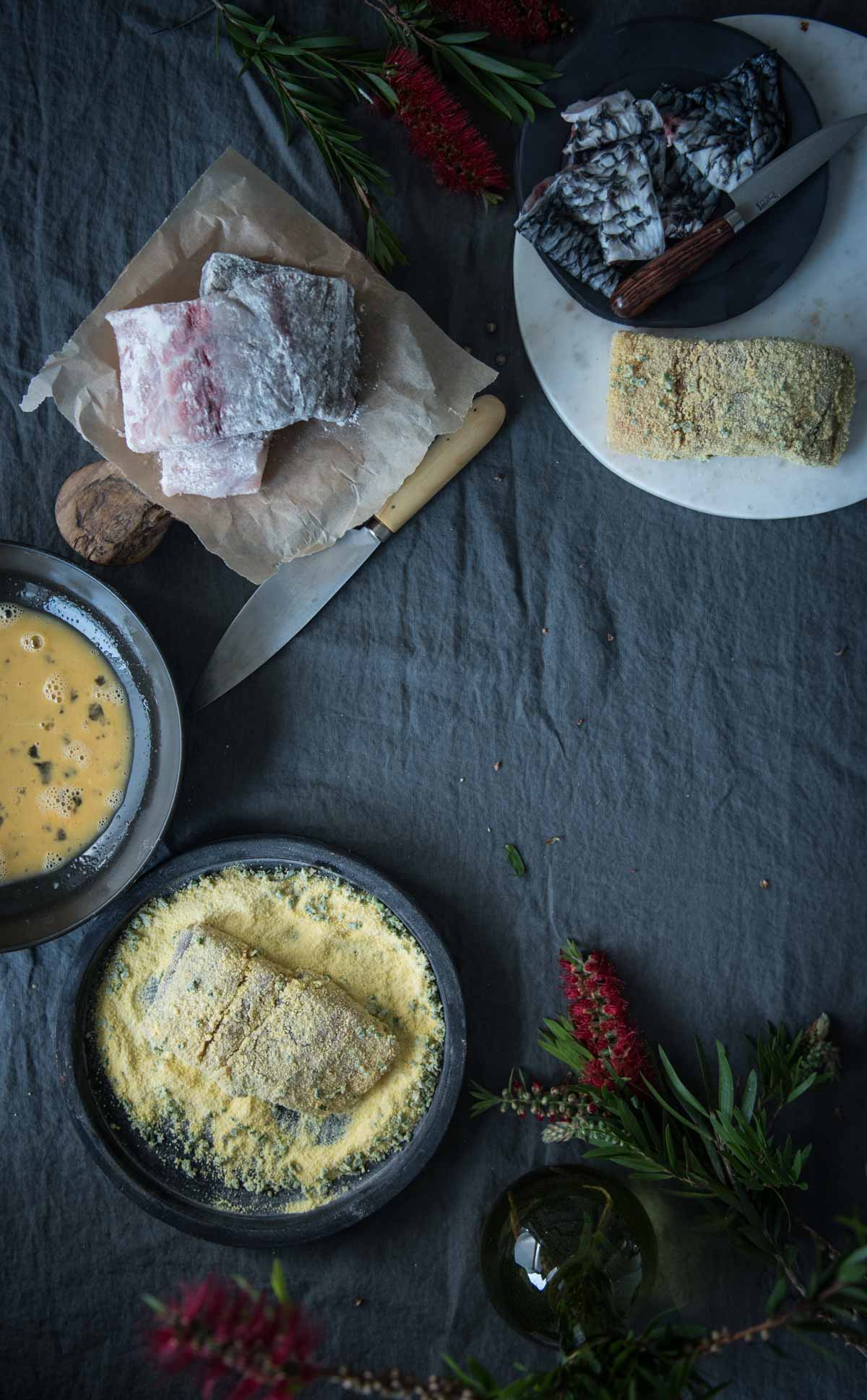 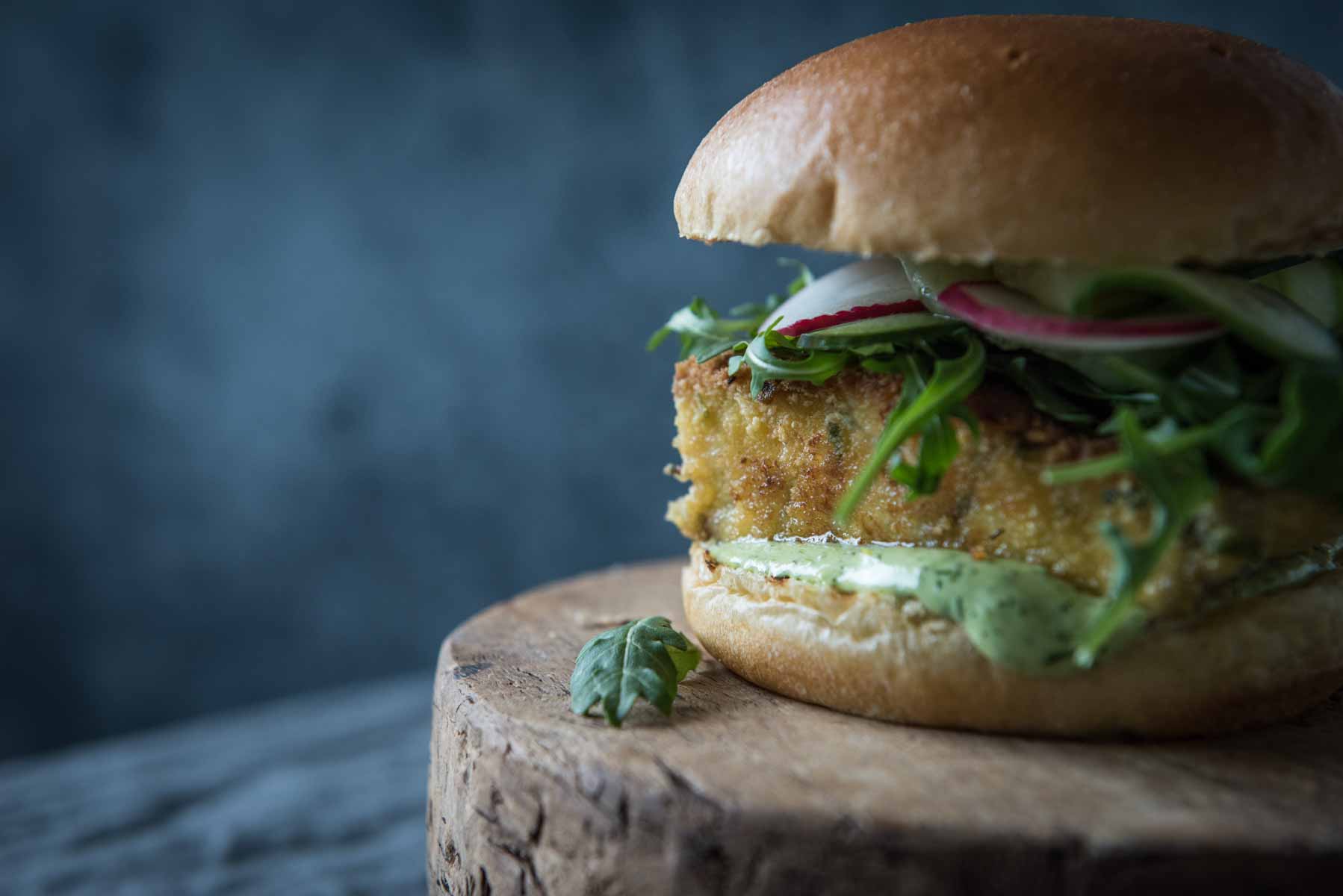 Purchase Barramundi fillets that are slightly larger than your brioche burger buns (or trim your fillets to size). Remove the skin from the Barramundi if your fishmonger hasn't already done it, and lightly coat each side in flour.

Set aside covered in the refrigerator until you are ready to make the burgers. In a small spice blender or food processor, add the aioli, dill, remaining chives and salt and pepper to taste, and blend until completely combined and even in colour and set aside.

Heat a large heavy based fry pan over medium high heat. Add olive oil and cook the fillets for 6-8 minutes on both sides or until golden. Spread a generous helping of dill aioli on the bottom of your brioche buns and top with the cooked barramundi fillets. Top that with fresh rocket, cucumber curls and radish and season with salt and pepper. Pop the top on the bun and serve immediately.

*I buy cornflake crumb pre-crushed here in the supermarket but you could also make your own by pulsing cornflakes in your food processor if you can't find it to buy. 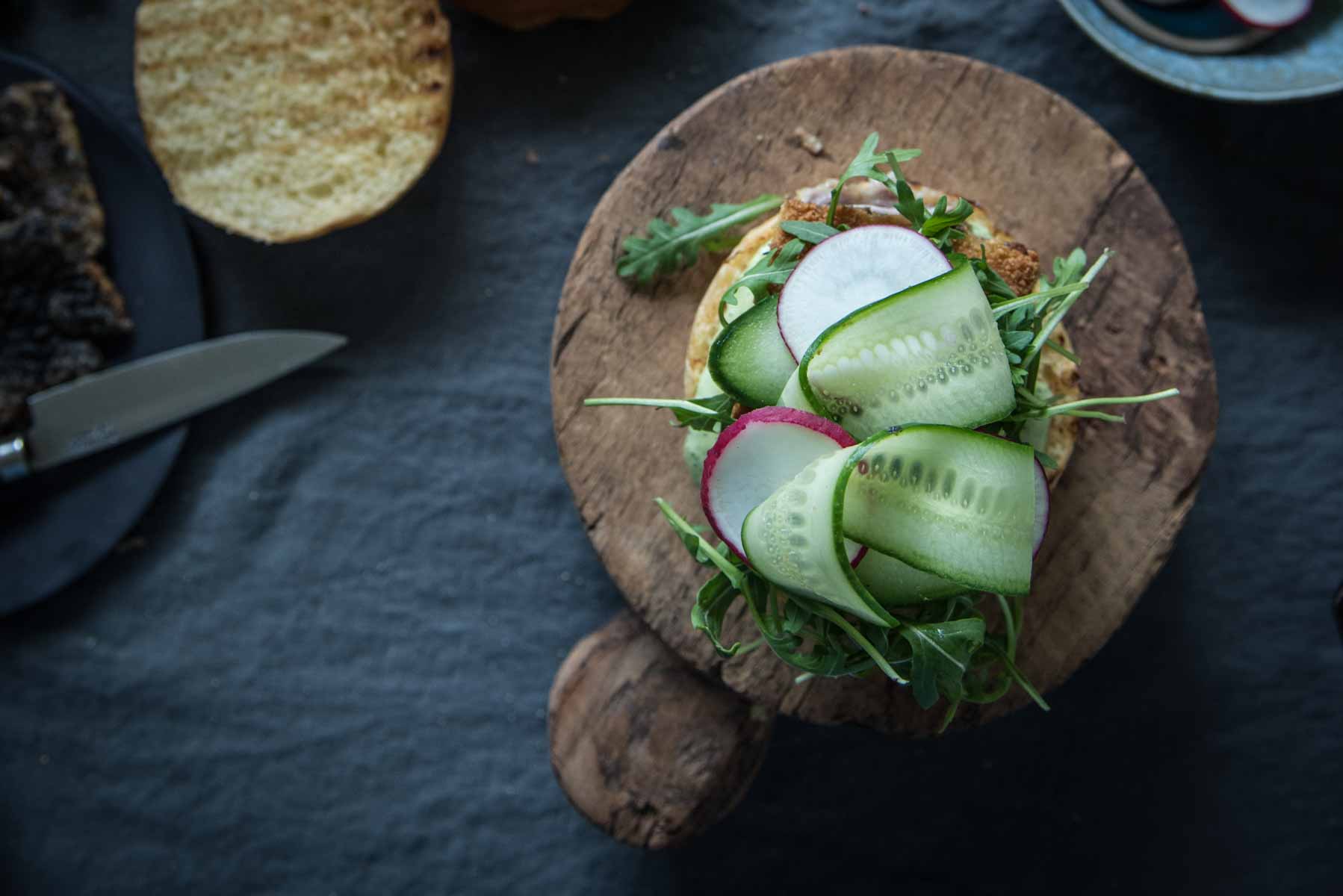 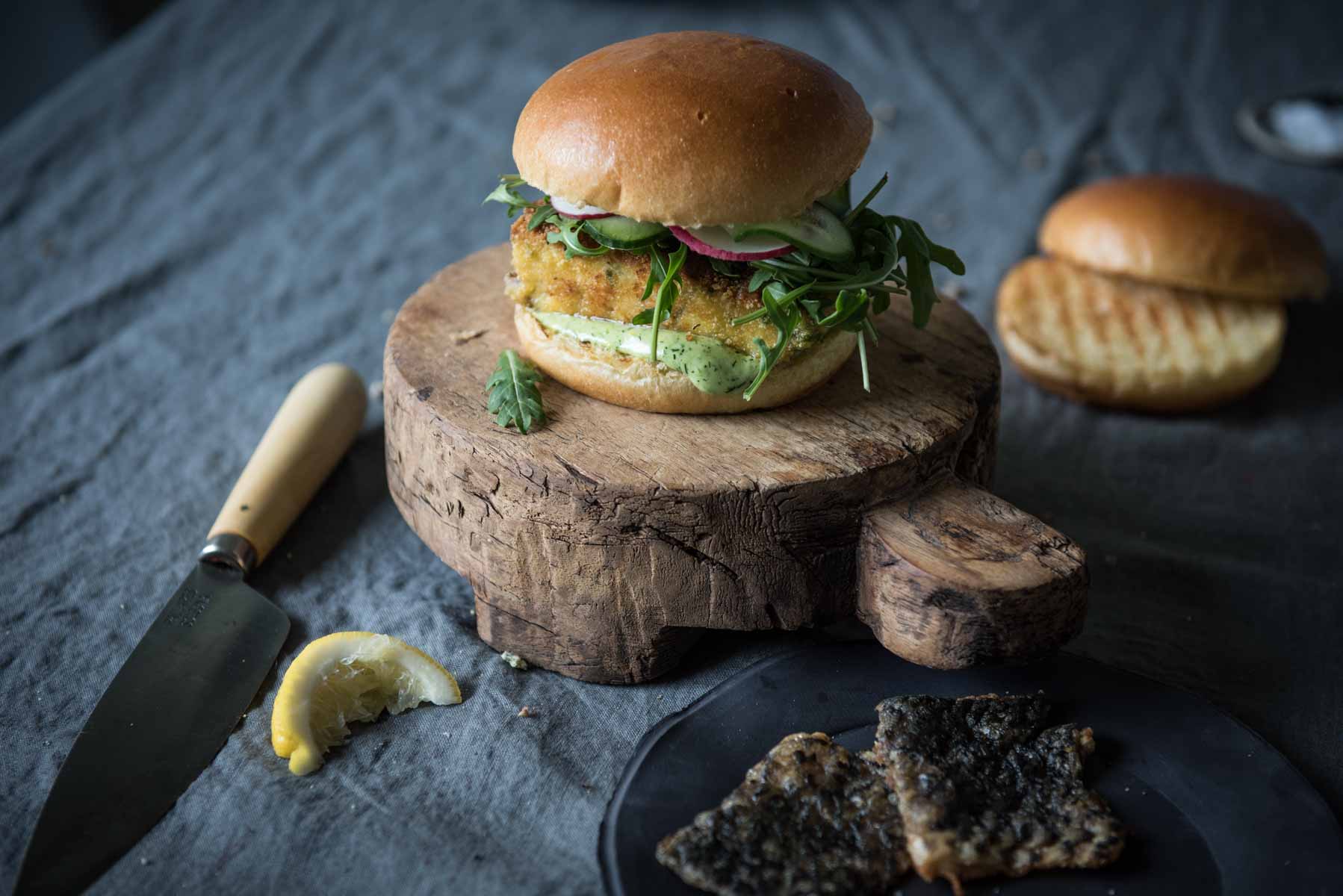