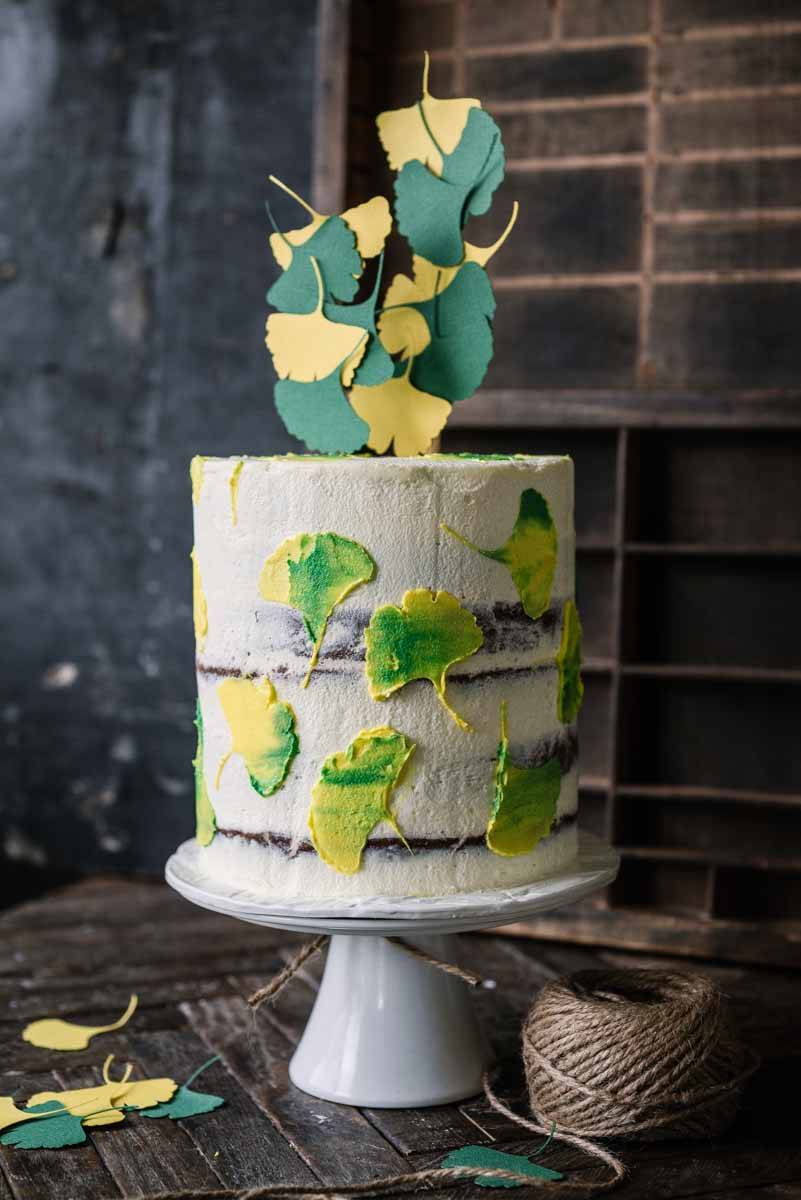 I’ve always been drawn to Ginkgo trees. Something about the beautiful shape of their leaves worked its way into my heart. Even before seeing a Ginkgo tree in person, I loved them. I had seen a few of them before seeing them in Japan, but the sheer number of them that I was able to sit under in Japan made my heart soar. I always wondered why I was drawn to them, but then I found out that they are an ancient tree. They have origins back to the Jurassic period and are often referred to as a living fossil. Knowing this makes me love them a little more.

I’ve been wanting to create a cake stencil using my Cricut Maker machine for some time now. I’ve been using the machine to make a lot of cake and cupcakes toppers, but I recently had the idea of cutting acetate and then using that as a cake stencil. I had a lot of different ideas for what to cut but finally settled on the shape of my favourite leaf – the Ginkgo. Another wonderful thing about the Ginkgo leaf is that it’s vibrant green foliage turns yellow in the Autumn. I wanted to show this transition in the design so I used green and yellow buttercream for the design. Its nowhere near as hard as it looks. 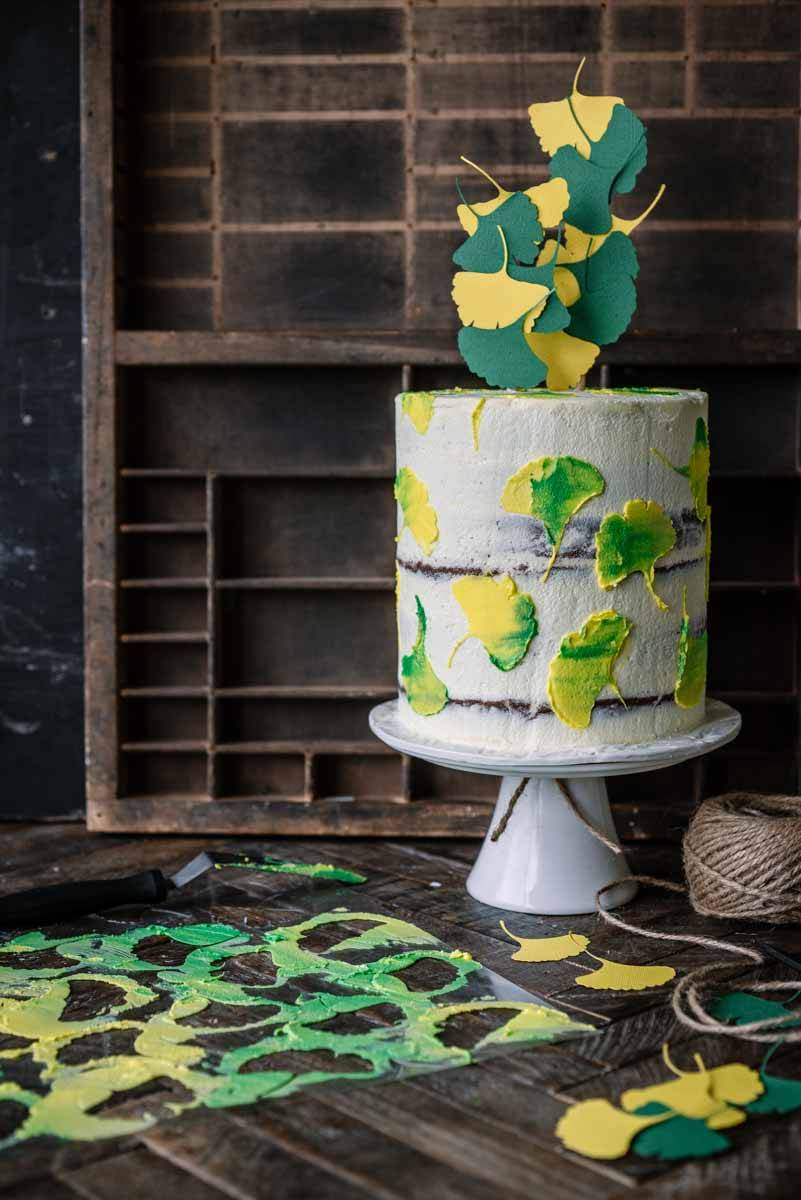 For the cake itself I wanted a hint of spice and zing so I added cardamom and lime to a simple vanilla cake base. It’s the perfect fragrant cake base. I baked it in two 15cm cake tins so I could get maximum height (because who doesn’t love a tall cake). I then did a simple vanilla buttercream with naked icing, wrapped the stencil around the icing once it had set hard and set about spreading my yellow and green coloured icing over the stencil. I needed to reposition the stencil once to get all around the cake and then moved it again for the top. Then I topped the cake with some falling green and yellow paper Ginkgo leaves. If you would like the SVG cutting file I created to make this stencil you will find it HERE. I also used the file to make the cake topper if you wanted to make that too.

Don’t worry if you don’t have the time or the inclination to make or use a stencil, you’ll still have a delicious cardamom and lime cake with a vanilla buttercream frosting. Yum! 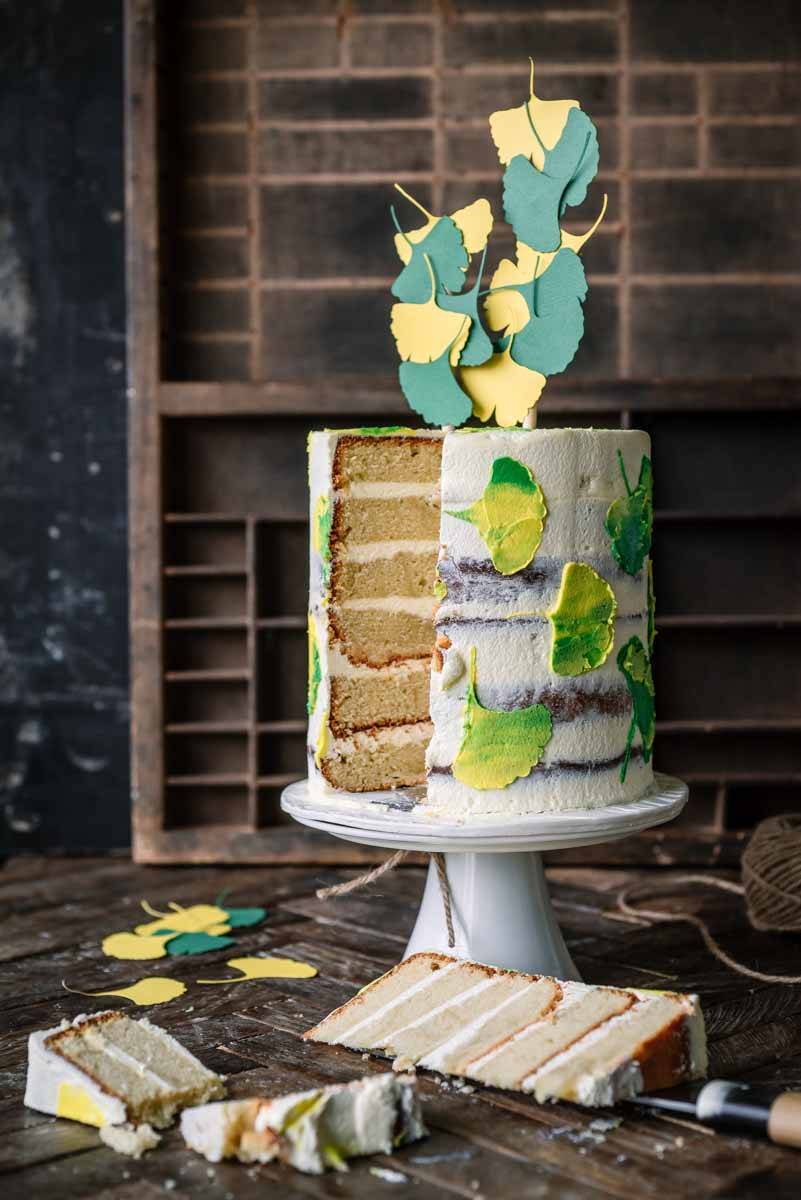 Preheat oven to 180°C. Grease and line the base and sides of 2 x 15cm round cake tins with baking paper.

Using a stand or hand mixer, beat butter, oil, sugar, vanilla and lime zest until well combined. Add eggs one at a time, mixing until incorporated. Separately, whisk together flour, baking powder, cardamom and salt. Using a spatula, mix in half of the flour mixture, then half of the buttermilk to the butter mixture. Repeat with remaining flour and buttermilk and mix until just combined.

Divide batter evenly between cake tins and bake for 45-50 minutes until an inserted skewer come out clean. Allow to cool in tin for 10 minutes before inverting onto cooling rack to cool completely.

In the bowl of a stand mixer fitted with the paddle attachment, beat butter until lightened in colour (about 3 minutes). Add icing sugar and mix on low until just incorporated. Beat on high for 5 minutes until light and fluffy. Add vanilla extract and mix to incorporate.

Once cakes are completely cooled, cut each into three layers so you have a total of six layers. Build the cake by spreading buttercream between each layer and stacking as you go trying to keep the cake as straight and level as you can. Use buttercream to ice around the outside of the cake, and allowing some of the cake layers to show through (this is called a naked ice). Put the whole cake back in the fridge and refrigerate until the buttercream icing has completely set and is hard.

Colour the remaining buttercream icing yellow and green using gel food colours. Place the stencil around the cake and secure with tape if it wont hold. take yellow icing and spread it over the stencil. Using a small scraper, pick up some green icing on the edge and run it gently along the stencil shapes to incorporate the green into the yellow. Gently and carefully remove the stencil lifting it up. Repeat with the other side of the cake and the top of the cake. You will need to refrigerate the cake for 15-20 minutes each time you move the stencil so that the Ginkgo shapes you have already iced can set. Top with cake topper and serve.

This cake recipe is adapted from a Queen Fine Foods recipe. 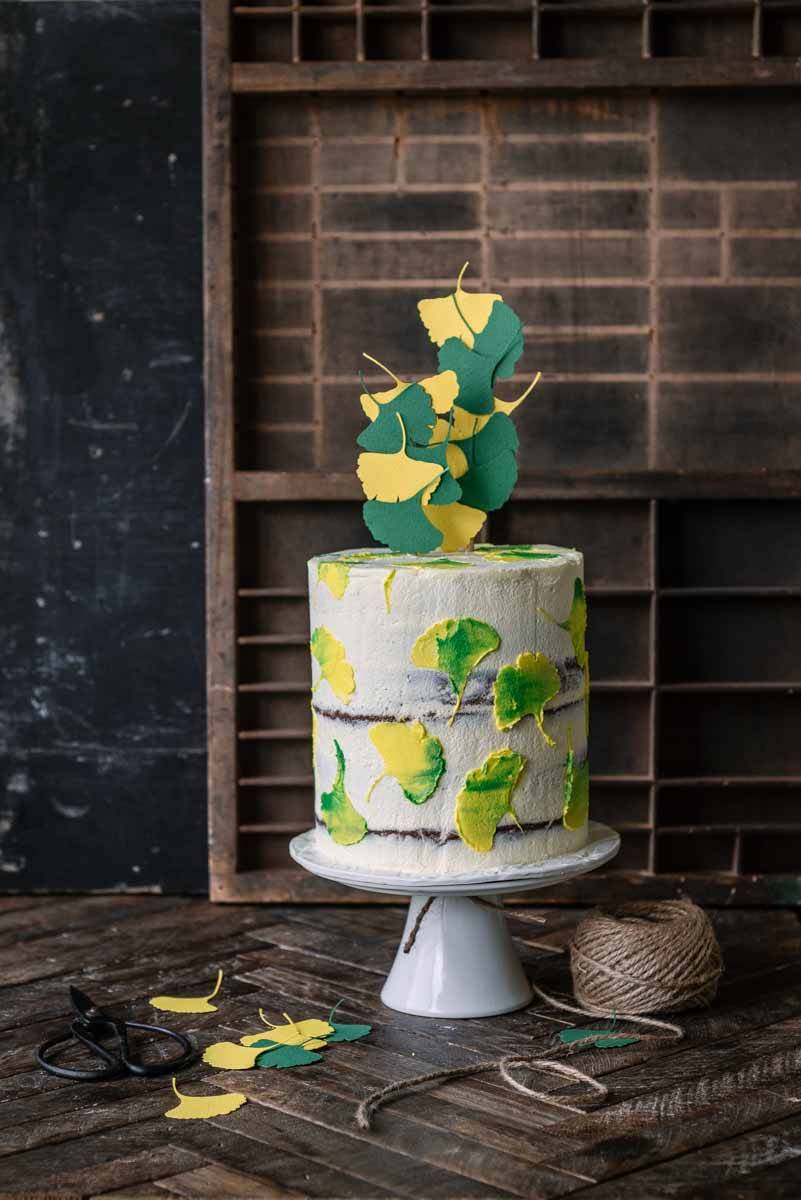 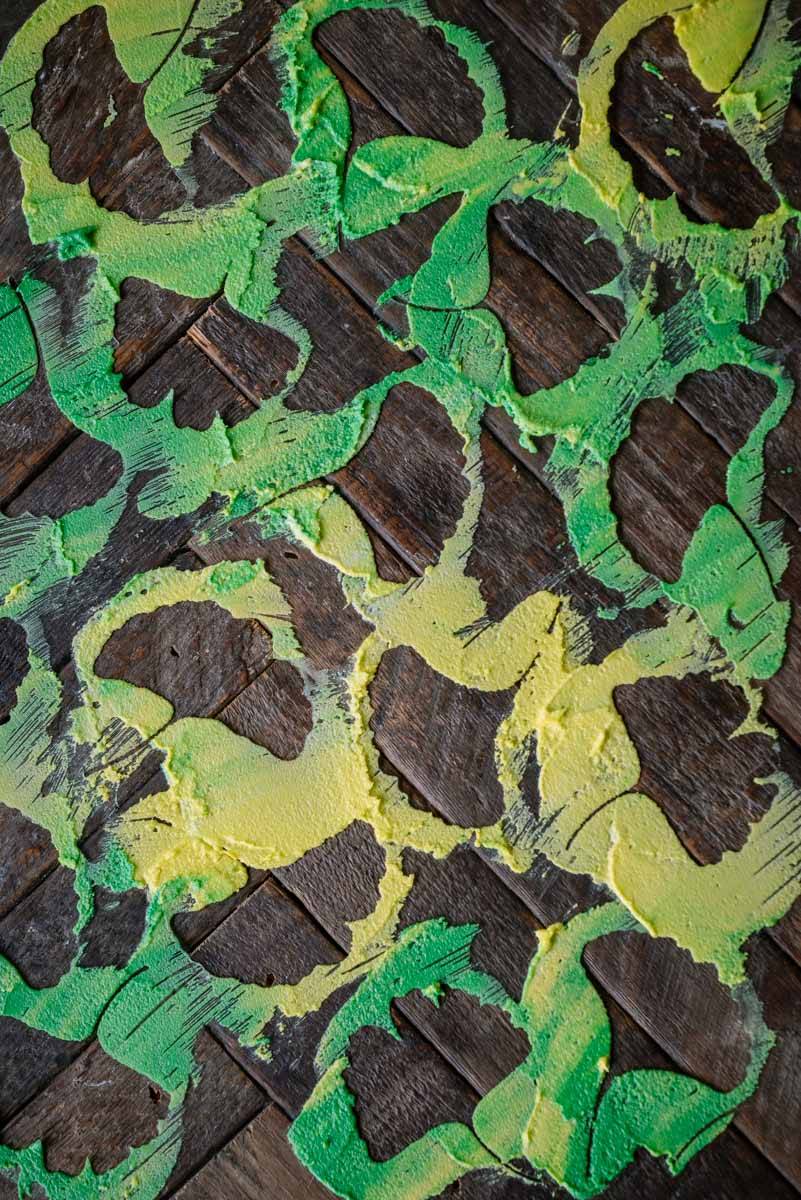