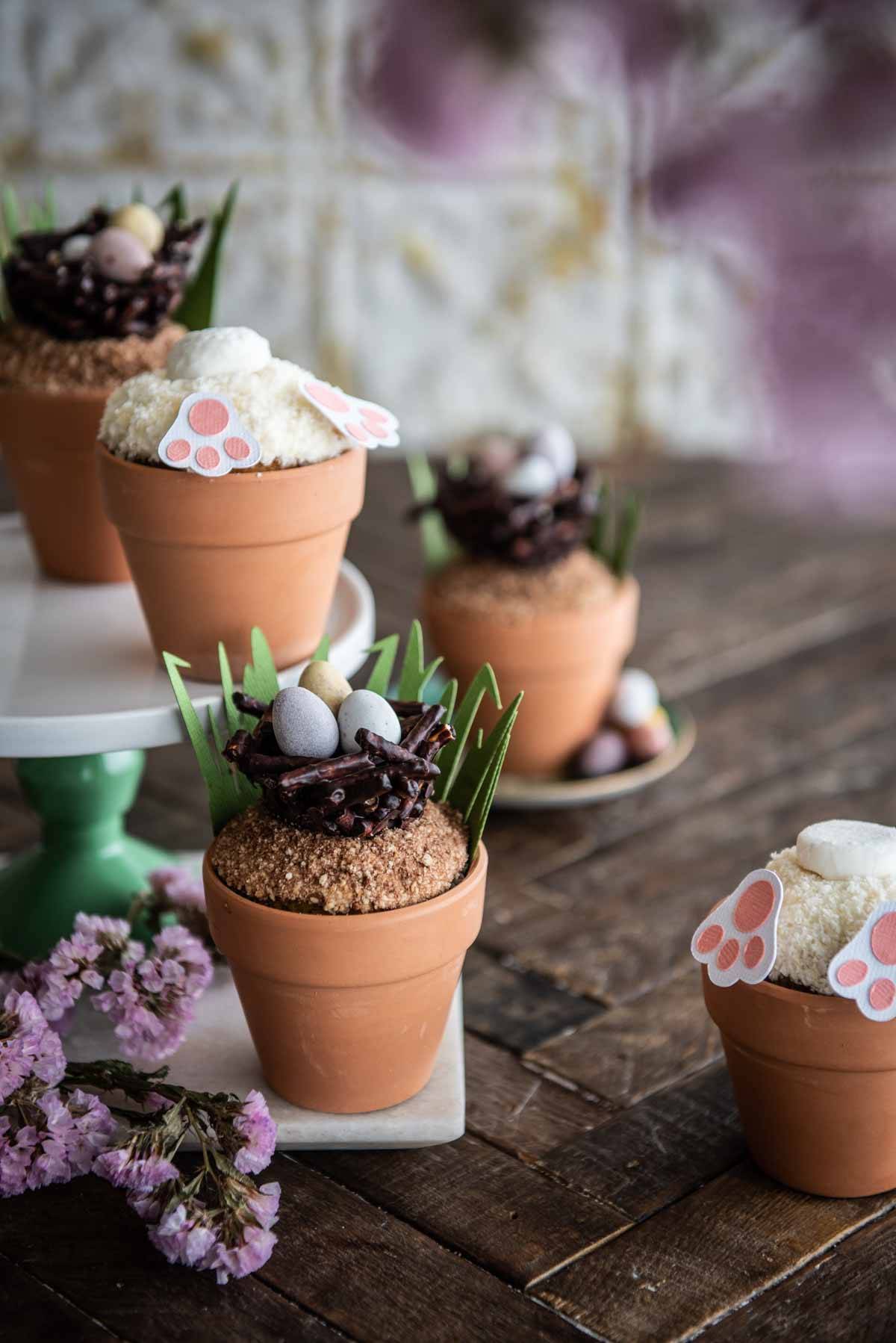 I have been making so many Easter recipes for clients this year that you would think it would make me sick of Easter cooking. Well, it did the opposite! All the super cute Easter recipes I’ve been making motivated me to create something special for Chew Town. These Easter cupcakes in tiny terracotta pots! There are two kinds – 6 cottontail cupcakes and 6 birds nest cupcakes – and inside is a vanilla bean cupcake with a little mini Cadbury cream egg hidden inside before baking. The best thing about these cupcakes is that you can actually bake the cupcakes inside the terracotta pots in the oven which means they rise in the pots and come out perfectly positioned for decorating (I did pop in a cupcake liner before adding the batter because the terracotta pots aren’t really food safe). 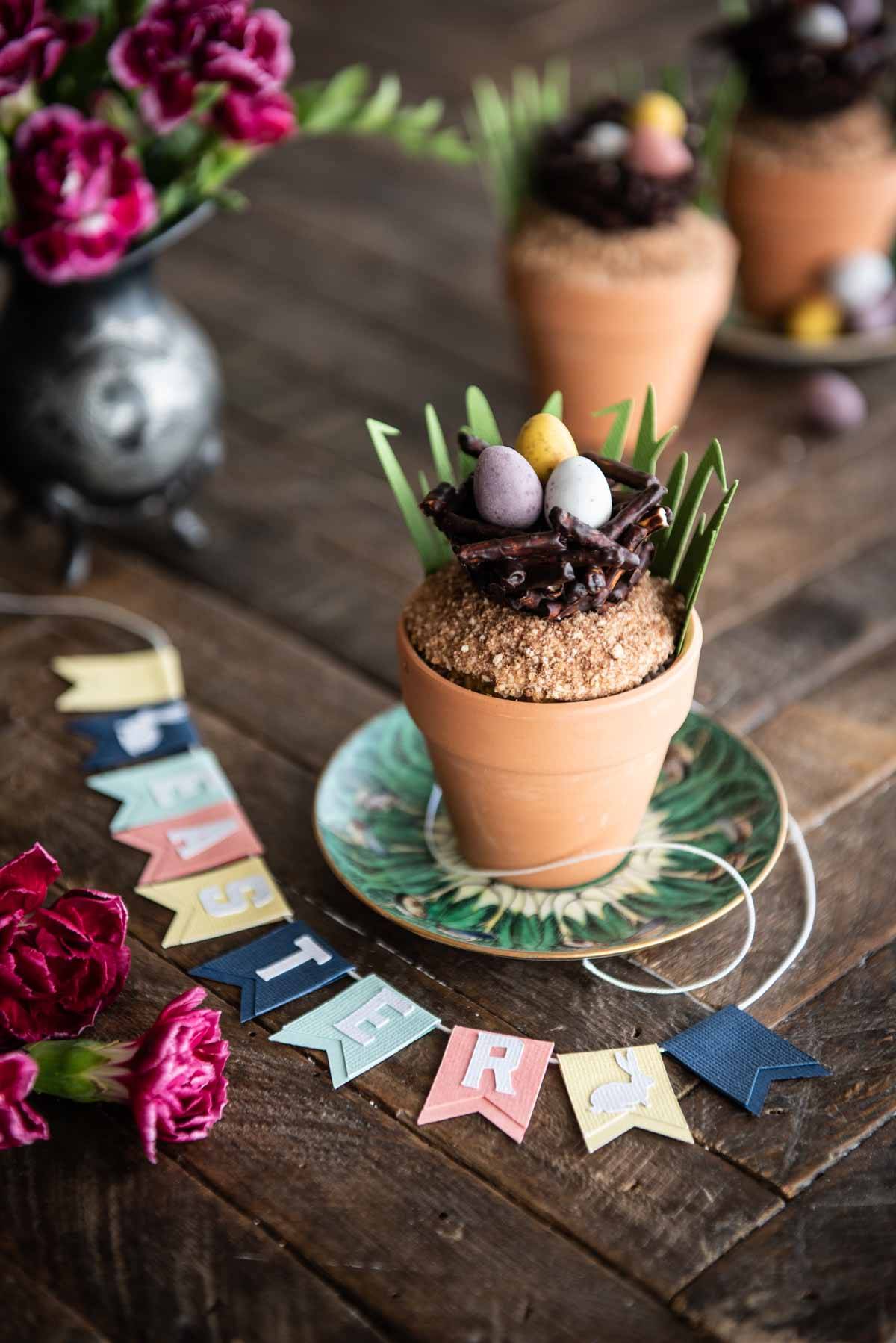 They really are just the cutest and are one of those treats that are almost a shame to eat… but never fear, you get over that quickly when you are rewarded with such a delicious cupcake centre! In the recipe below I walk you through all the decorating steps. Quite simply, it is one batch of cupcake batter that is baked in all 12 cupcakes, one half batch of vanilla bean buttercream for all 12 cupcakes (because you only need to cover the tops of the cupcakes) and then two slightly different ways of decorating. But remember, if two different types of decorations seems daunting, then pick one and make 12 of them! The cottontail cupcakes and certainly the easier of the two to decorate. 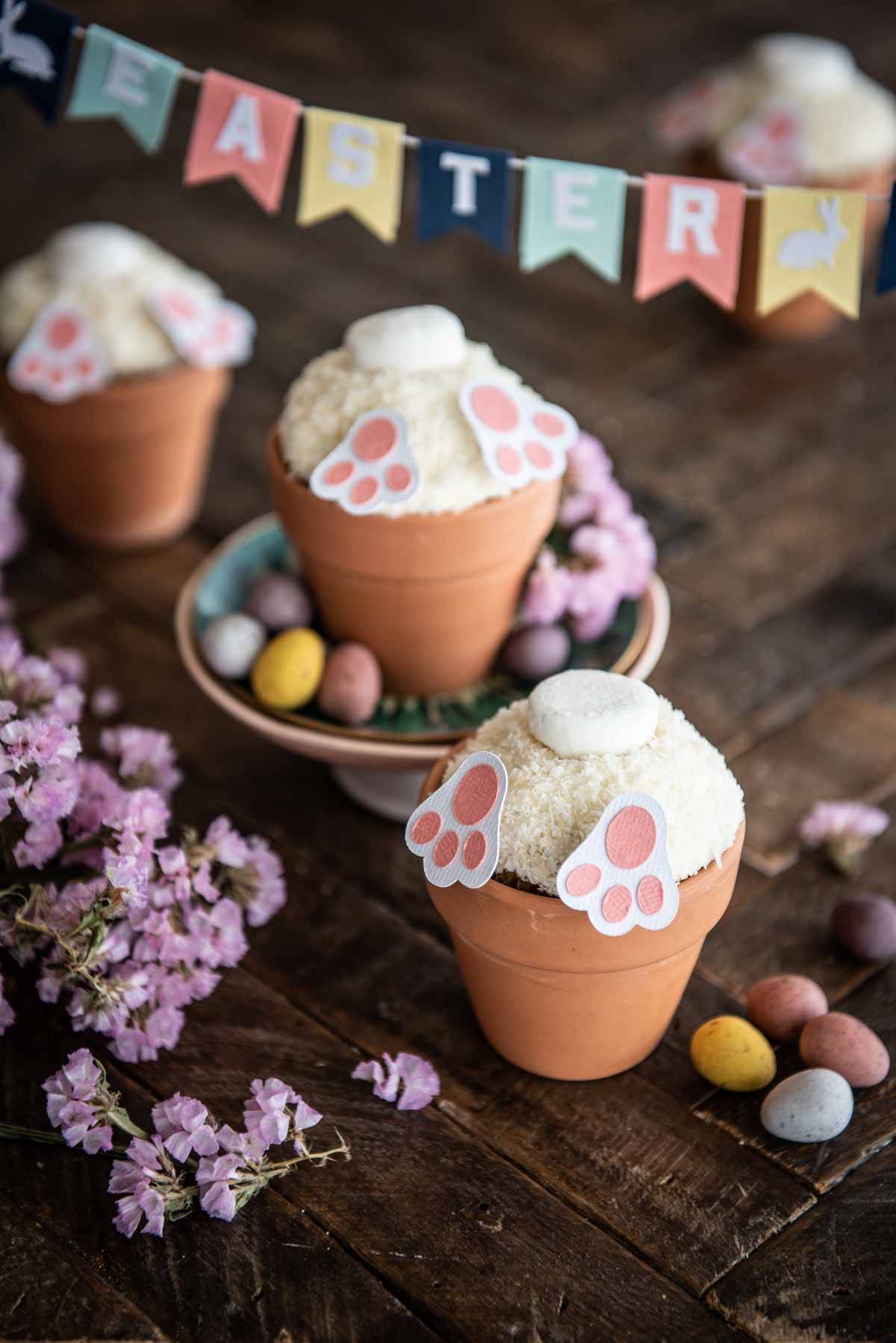 Preheat the oven to 180°C and push 12 cupcake liners inside of 12 mini terracotta pots (I bought mine from K Mart Australia in the craft section in packs of 3 - Anko brand).

Using an electric mixer, cream together the butter, sugar and vanilla bean paste. Add the eggs one at a time and beat lightly between each. Add flour and milk in two batches mixing between each addition until just combined. Spoon better into the cupcake liners and terracotta pots ensuring you only fill them 3/4 of the way to allow room for the cupcakes to rise. Push a chocolate cream egg into each pot ensuring the batter covers it completely and bake for 15-20 minutes until the top of the cupcakes spring back into place when lightly pressed. Remove from the oven and set aside to cool completely.

Place butter in the bowl of a stand mixer and beat on medium-high speed for 6-8 minutes until pale and fluffy. With the mixer off, sift in icing sugar and vanilla and fold to combine. Return to mixer and beat until combined (approx. 2-3 minutes). Transfer icing to a piping bag fitted with a large round piping tip and pipe round dollops of icing onto the top of each cupcake.

Combine the pretzels and the chocolate and mix until well coated. Take 6 tiny bowls and add a small piece of baking paper to the inside of each. Spoon some of the pretzel and chocolate mixture into each bowl and gently make an indent in the centre of the eggs. I took a pair of tweezers and added pieces of chocolate covered pretzel sticks to the outside edges to make it look more nest like. Set aside in the fridge until the chocolate has set and the nests are completely solid.

Combine the digestive biscuits and cocoa powder in a food processor until soil like crumbs have formed then transfer to a bowl. Dip the tops of 6 of the cupcakes into the biscuit mixture and gently press down and around until the buttercream has spread all over the top of the cupcake and the buttercream is well covered with the biscuit 'soil'. You may need to remove the cupcakes from the terracotta pots to make this easier, but you can just pull the cupcake and liner out of the pot and pop it back in when you are done. Top each cupcake with a little nest and place 3 speckled chocolate eggs in each. Cut green grass from cardstock and place onto the inside back of each cupcake.*

Place your toasted dessicated coconut in a bowl and gently press the tops of the cupcakes down into the coconut until the buttercream has spread all over the top of the cupcake and the buttercream is well covered with the coconut 'bunny fluff'. Cut your 3 marshmallows in half and place one half in the middle of each cupcake. Cut little bunny feet from white and pink cardstock and place onto the cupcake - I hot glued mine to toothpicks first before placing the toothpicks into the cupcake tops to stabilise the feet.*

I used my Cricut machine to design and cut the bunny feet and grass pieces for these cupcakes. For more of my craft projects visit CricutCult 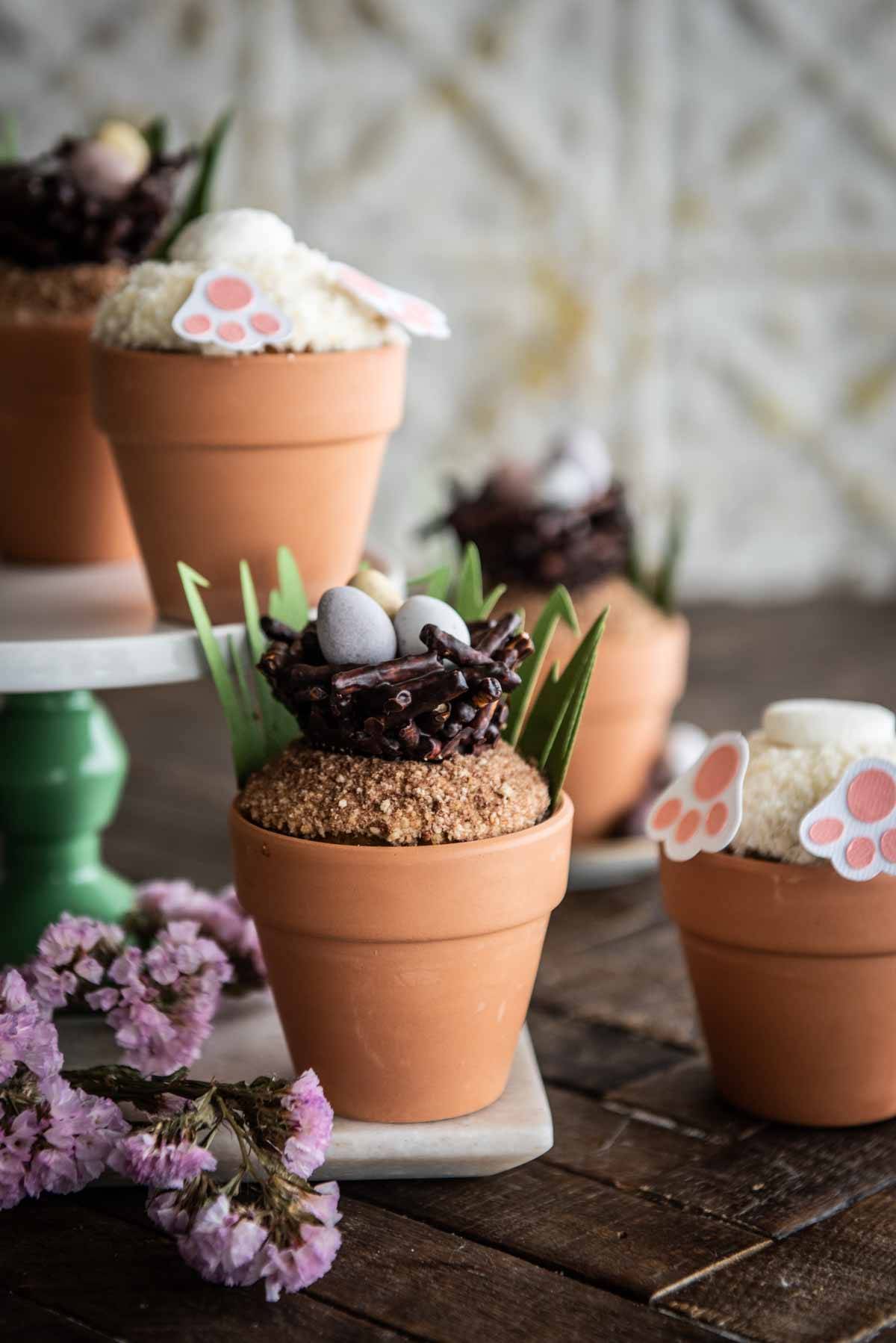