Scotty worked 18 days straight recently. It was the most I’d seen someone work in a long time. In compensation for the long weekend he missed out on, he had Friday off – and he didn’t have to work the weekend – what a treat!

I received a message the Friday afternoon seeing what I thought about slow cooked lamb shanks. How is it that he knows exactly what we both feel like eating at all times? Needless to say it sounded wonderful, so I convivially agreed with his choice and arrived home later that evening to the desirable aromas of lamb shanks wafting through the house.

Given how successful the beef and mushroom pie filling had been when slow cooked in the Le Crueset, he had decided to cook the lamb shanks in it. Let me just put in writing that I don’t think we will EVER cook lamb shanks or pie fillings in anything BUT the Le Crueset. My friends, do yourself a favour and invest in one!

We sat down to eat the tasty shanks a couple of hours later and could not quite believe how good they were. We actually couldn’t imagine them tasting any better that they did.

While eating we conversed about Scotty’s friend coming over for dinner the next night and jokingly Scotty said “I could almost have this again tomorrow night”. Well, I’m sure you can see where this is going… We found ourselves not 24 hours later having the same meal, with the same sides the following night – and it was just as flavourful as the night before. 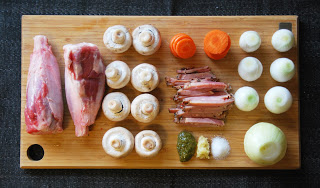 Season the lamb with salt and pepper.

Heat olive oil in large cast iron casserole over medium-high heat. Add the shanks and cook until evenly browned, about 2 minutes per side. Remove shanks and set aside.

Return the casserole to medium heat. Add the onions, carrots, bacon and garlic. Cook until the onions are browned, 5-7 minutes. Increase the heat to high and stir in the wine, scraping the bottom and sides to loosen any browned bits. Bring to a boil and add the tomato passata, beef stock, mushrooms, rosemary and chilli. Return the shanks. Bring to a boil, cover and place the casserole in a 180 degree celcius oven (or a temperature that will just maintain a simmer.)

Cook, covered, at a simmer until the meat is tender, about 2 1/2 hours. After that time return the casserole to the stovetop. Remove the cover and increase the heat to medium-high. Cook until the liquid begins to thicken, 20-30 minutes. Transfer the shanks to a serving platter and cook the liquid until thick, about 15 minutes. Season to taste with salt and pepper. Pour over the shanks and serve with smashed baked potatoes and salad. 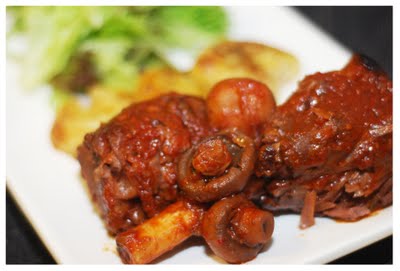