Our family has been doing this thing over the past few years where each person is responsible for cooking a different course. It is a lot of fun and takes the stress out of one person/couple having to cook the whole meal.

Yesterday we went to visit my sister at their beach house to partake in a family culinary challenge. We had decided in advance that Scotty would make the starter, I would do the entree, sis would cook the main and my brother-in-law would prepare dessert.

Scotty had decided during the week that his starter would be a stacked canape of complimentary ingredients all cut into perfect circles and layered on top of each other. I received via MMS on Friday a diagram of how he envisaged the canape being put together (I have mentioned he is an Art Director haven’t I?). 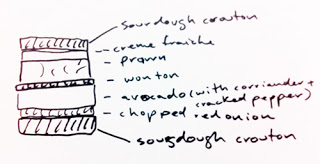 On Friday night he had a trial run where canapes were prepared, cooked, layered in different ways, eaten, analysed and assessed. We agreed on the perfect preparation of each layer and order of the layers for the following night.

We arrived the following afternoon at the beach house. It has recently been renovated and fitted with the most wonderful kitchen. A giant granite bench now adorns the kitchen and allows enough room for four people to stand around it and prepare multiple dishes. 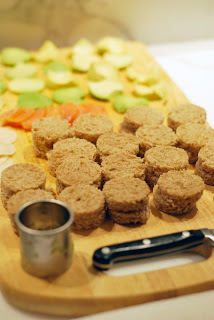 As Scotty was preparing the starter I became sous chef by default. This basically meant I was getting things from the fridge and cupboard when he needed it, and cleaning up after him.

He prepared all of the elements (using a small chef’s ring) and then went about piecing the canape stacks together.

As a starter to our four course meal these canapes were great! Scotty had allowed for 4 canapes per person and they all got eaten quickly (which meant they were tasty) yet still allowed plenty of space for the next few courses. 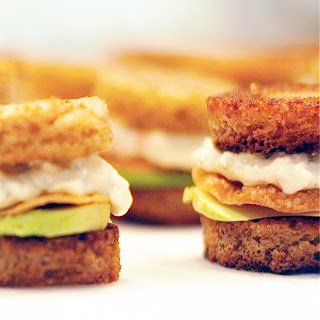