Scotty remembers his mum’s Beef Wellington with a nostalgia that is visible on his face when thinking about it. I have a similar reaction to mention of my mum’s Pasta al Forno, Stuffed Artichokes, Rolled Pavlova, Apple Pie, Gnocchi, Pasta Fagiolini, etc… (my mother really is a ridiculously good cook). So when deciding what to cook for dinner last week, and wanting a bit of a cooking challenge, I thought I would try something that has always been on my list – Beef Wellington.

The reason I have not made a BW before is because the idea of making crepes turns me off. I am crap at all things crepe related and because as all the recipes I had read in the past had said that I needed a layer of crepe between the mushroom duxelle and puff pastry, I just wrote the idea of cooking a beef wellington off… that was until I realised I could replace the crepe layer with prosciutto!

Below is a transcript of what usually transpires when I feel like cooking for us on the weekend and am trying to decide:
me: I think I’ll cook something tasty tonight
scotty: sounds great!
me: what do you think about [insert dish here]?
scotty: whatever you like babe – sounds good

Below is a transcript of our conversation when I mentioned a Beef Wellington:
me: I think I’ll cook something tasty tonight
scotty: sounds great!
me: what do you think about [pause for dramatic effect] a beef wellington?
scotty: Hell yes!!

So… I had a go – and it was so ridiculously tasty. It really wasn’t very complicated, it just required a few steps. The most important thing though is to spend money on a great beef fillet (ours cost $40 AUD).

Heat oven to 220C. Sit the beef on a roasting tray, brush with 1 tbsp olive oil and season with pepper, then roast for 15 mins for medium-rare or 20 mins for medium. When the beef is cooked to your liking, remove from the oven to cool, then chill in the fridge for about 20 mins.

While the beef is cooling, chop the mushrooms as finely as possible so they have the texture of coarse breadcrumbs. You can use a food processor to do this, but make sure you pulse-chop the mushrooms so they don’t become a slurry.

Heat 2 tbsp of the oil and all the butter in a large pan and fry the mushrooms on a medium heat, with the thyme sprig, for about 10 mins stirring often, until you have a softened mixture. Season the mushroom mixture, pour over the wine and cook for about 10 mins until all the wine has been absorbed. The mixture should hold its shape when stirred. Remove the mushroom duxelle from the pan to cool and discard the thyme.

Roll out a third of the pastry to a 18 x 30cm strip and place on a non-stick baking sheet. Roll out the remaining pastry to about 28 x 36cm. Unravel the fillet from the cling film and sit it in the centre of the smaller strip of pastry and brush the pastry’s edges, and the top and sides of the wrapped fillet, with beaten egg yolk. Using a rolling pin, carefully lift and drape the larger piece of pastry over the fillet, pressing well into the sides. Trim the joins to about a 4cm rim. Seal the rim with the edge of a fork or spoon handle. Glaze all over with more egg yolk and, using the back of a knife, mark the beef Wellington with long diagonal lines taking care not to cut into the pastry. Chill for at least 30 mins and up to 24 hrs.

Heat oven to 200C. Brush the Wellington with a little more egg yolk and cook until golden and crisp – 20-25 mins for medium-rare beef, 30 mins for medium. Allow to stand for 10 mins before serving in thick slices. 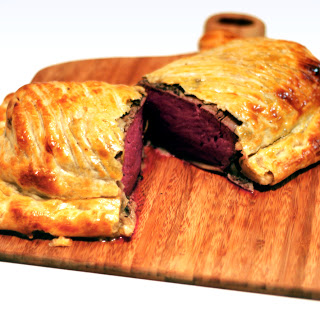