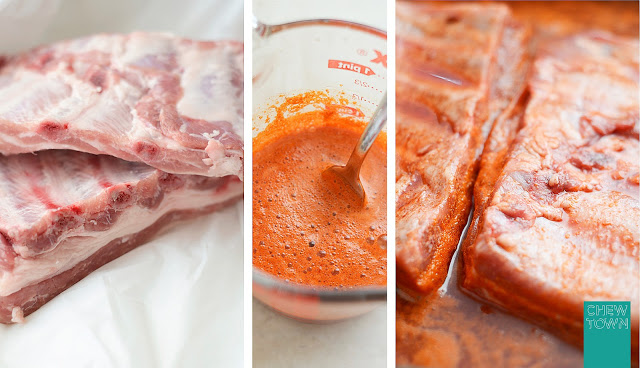 There is something wonderful about BBQ cooked meat – that wonderful charred, smokey flavour sends warm feelings deep down into one’s soul. Even better than cooking a plain old piece of meat on a barbie is cooking ribs. In my view, there is no better way to cook ribs than on a BBQ. I’m a massive fan of ribs and am one of those people that has to get every last bit of meat off the bone when eating ribs till the bones look like there was never any meat on them to start with.

Scotty decided recently that he wanted to try his hand at making Asian BBQ pork ribs. We are massive fans of BBQ pork and always order far too many BBQ pork dishes when eating at Asian restaurants. We can’t seem to get enough of it. Indeed, one of my favourite things in the world is a BBQ pork bun!

After deciding on making the BBQ pork ribs we headed to Hurstville to pick up some supplies. Looking at all the pork ribs on offer at a few different Asian butchers, we decided the first lot we saw looked the best and headed back to buy two racks.

Now, a slight disclaimer to say these ribs were made with a packet roast red pork seasoning mix. It is something easy that people can try which will not cause undue kitchen stress or angst and yet still yield a wonderful and flavourful result. While at the Asian grocers we picked up a packet of this mix as well as a few onions and were on our way.

Place pork ribs in a large rectangular baking dish and pour the dissolved red pork mix over the ribs. Cover and set aside in the refrigerator for at least 2 hours (preferably overnight).

When desired marinating time has been reached, preheat oven to 150 degrees Celsius. Remove the outer layer of the onions and cut in large rounds. Remove the pork from the fridge and place the onions under the ribs so that the ribs are no longer sitting in the marinade. Cover with alfoil.

Place the dish in the oven and bake for 2 1/2 hours at 150 degrees. Once cooked, remove from the oven and finish off on the grill side of a preheated BBQ until crisp and charred. 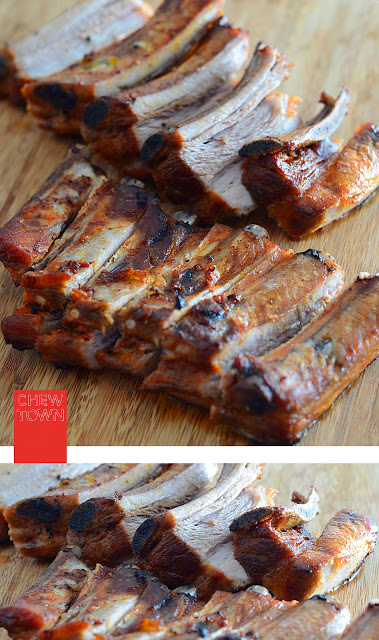