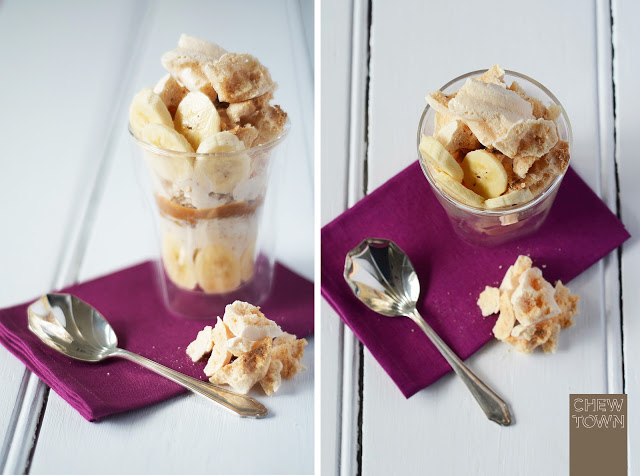 I love an impromptu no fuss dinner party. With no firm plans for Saturday night after a big week of work, our friends C&J contacted us during the day to see what we were up to. With them happy to come to us, we quickly accepted and I got to thinking about quick, easy and tasty things we could have for dinner.

We were heading to Pino’s La Dolce Vita for lunch with Scotty’s mum as it was Simone’s last weekend in the kitchen and so we decided that for the main course we would pick up some of Pino’s famous sausages. After a tasty feed of pasta al forno and beef cheeks,  and a fond farewell to Simone, we opted for two types of sausages: olive and provolone; and rocket and pine nut. I knew that the sausages would be so good that we could serve them with a simple garden salad and it would be wonderful.

Rather than opt for an entree, one of our favourite things to have for a relaxing dinner is to serve a simple selection of tasty items on a large wooden chopping board to have with our drinks. We served a tasty homestyle chorizo sausage (sliced and grilled in the oven and served with lemon wedges and fresh bread), vegetarian dolmades and zesty lemon almonds (Chew Town Bites recipe to follow later this week) which I tried for the first time and were universally liked by all!

For dessert, I knew I wanted to make something that had maximum impressive impact but required least effort. So I decided to make a banana sundae and try something I had been wanting to make for a while – yoghurt ice cream. Not having an ice cream maker, nor the patience to make ice cream without one, yoghurt ice cream is the perfect solution as you blitz all the ingredients and then throw it in the freezer for a few hours until set.

The dessert was a great success! The icecream was easy to make, the sundae was simple to put together, and when dessert came out it received an “ooh” and ahh” from our guests – just what I had hoped. We all scoffed our sundaes and I satisfyingly walked four empty glasses back to kitchen some 8 minutes later!

Adapted from a Jamie Oliver recipe 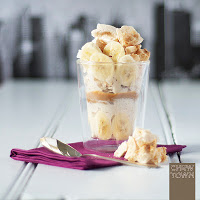 Place a shallow dish and 4 dessert glasses in the freezer to chill. While chilling, blitz four bananas, youghurt, cinnamon, honey, frangelico and hazelnut until smooth. Place banana mixture into chilled shallow dish, cover and put in freezer for at least 5 hours to set.

Befor serving, slice the remaining two bananas, roughly crush the meringues and heat the dulce de leche in a small saucepan until runny.

*Dulce de leche is a South American milk caramel. It is rather easy to make (see my easy dulce de leche post) but can also be bought from gourmet food shops and delis. 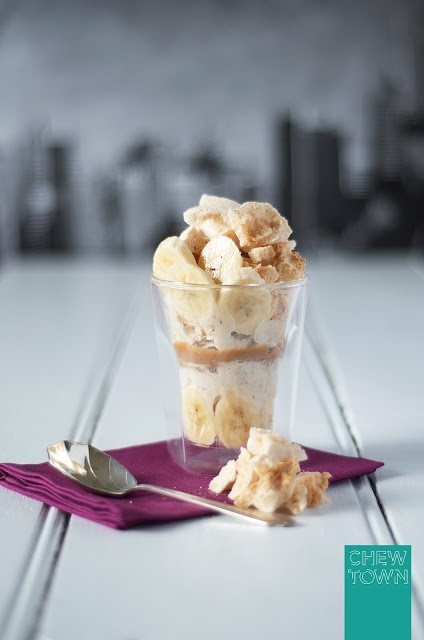