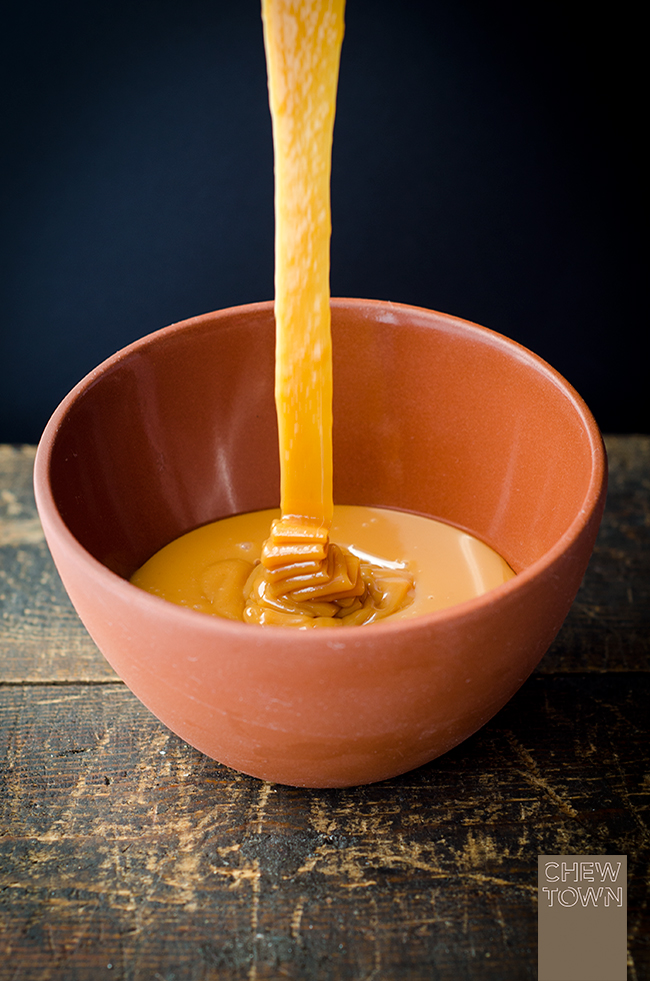 Glorious isn’t it? Cascading ripples of sweet caramel. A desire to add it to anything and everything. Toast? Sure. Ice cream? But of course. Cakes? Most definitely. The list goes on…

True to my word, I promised this recipe would find its way to you shortly after my Popcorn and Salted Cajeta Cake post so that you can try your hand at the cake… or maybe just make the caramel and eat it by the spoonful. Now, I made a pretty bold statement in that post, and that was that I thought Cajeta (pronounced cah-heh-tah) was even better than Dulce de Leche – I stand by that statement.

Cajeta and Dulce de Leche are very similar, but Cajeta differs from its relative in a distinct yet subtle way. They are both a milk based caramel made by thickening sweetened milk, but the primary difference is that the Mexican version is made from goats milk instead of cows milk. The goats milk adds a wonderful tang to the Cajeta that provides another dimension to the caramel while also mitigating the sweetness. Now, for all you goats milk haters out there, never fear, the flavour the goats milk adds isn’t the same as goats milk cheese – it is far more subtle. You see, Scotty hates goats milk cheese, but he really enjoyed the Cajeta.

In Mexico you can often find Cajeta infused with vanilla, rum or even coffee liqueur which apparently makes it even more flavourful (methinks the coffee liqueur might be worth an experiment!).

Into a large heavy sauce pan add goats milk, sugar, cinnamon, vanilla and salt, and heat over medium/high heat stirring until the sugar the sugar has dissolved and the mixture is lightly boiling.

In a small bowl mix cows milk and bi-carb soda until the soda has dissolved. Remove saucepan from heat and pour in the baking soda mixture being sure to stir rapidly and taking care as the liquid will froth and bubble. Stir until the bubbles have stopped then return the saucepan to a medium heat and bring back to a simmer.

Continue to cook stirring every 5 minutes until the mixture has thickened and turned into a thick sauce consistency. Continue simmering and stirring till the colour turns to a dark caramel and coats the back of a wooden spoon. The whole process should take between 40 minutes to 1 hour. The consistency you are looking for is that of maple syrup.

Remove from heat, discard the cinnamon stick, and pour the caramel into a glass jar. Allow it to cool completely before transferring to the fridge where it will stay fresh for a few weeks.