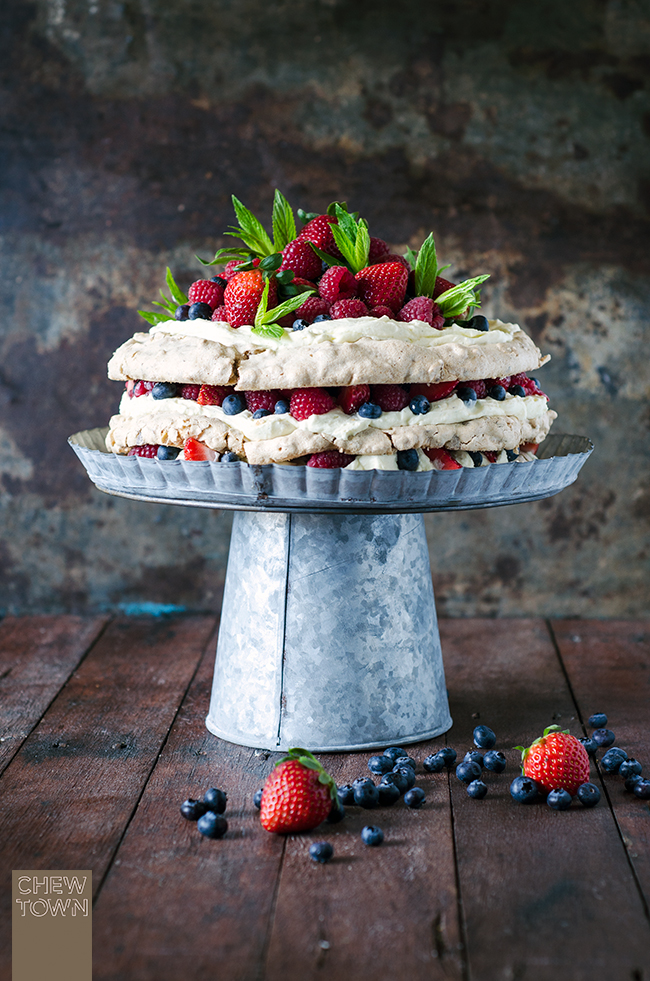 Once one has set up a family tradition, especially when children are involved, that tradition becomes an expectation that one absolutely must make time to deliver on, regardless of ones workload.

Last year a young boy asked for a chocolate cake from his auntie Wah-Wah (a nickname that was borne from an inability to say Amanda as a toddler) to celebrate his holy communion. In response, he was presented with a Valrhona Chocolate Cake with Dulce de Leche.

This year, his sister asked auntie Wah-Wah for a special cake for her holy communion that was just as good (if not better) than her brother’s was. Hard to do when the chocolate cake was so good. There was only one thing for it… make something completely different.

After asking a few questions (with covert attempts to steer the young girl in a particular direction), a layered hazelnut pavlova with mascarpone cream and berries was agreed upon – good idea little girl/good work persuasive saleswoman Wah-Wah.

Now, all that was required was to balance the workload of a busy full time job, concurrent recipe development and photography work, and the time it would take to make said cake, so that auntie could deliver and not disappoint the girl.

Auntie arrived with the pavlova while everyone was at church to help start preparing the celebratory lunch (that’s what one gets when one has reached a point in ones life where one doesn’t feel like one needs to go to church anymore… one gets relegated to kitchen labour by ones Italian family). So when the service had ended and the rest of the family returned home, the little girl ran inside with her fresh flowered crown bouncing away and white dress swishing, sighted the cake for the first time and was delighted with her very high and very pretty layered hazenut pavlova with mascarpone cream and berries.

In other stories, Chew Town is a finalist in the Pedestrian.TV Blogster awards. Not quite sure how I find myself in such esteemed company, but it’s happened so I would love it if you could take the time to quickly head over to the awards page and let me know you care by clicking the “Like” button on the right hand side – it will literally take you 5 seconds. Head here to vote: Chew Town Blogster Page 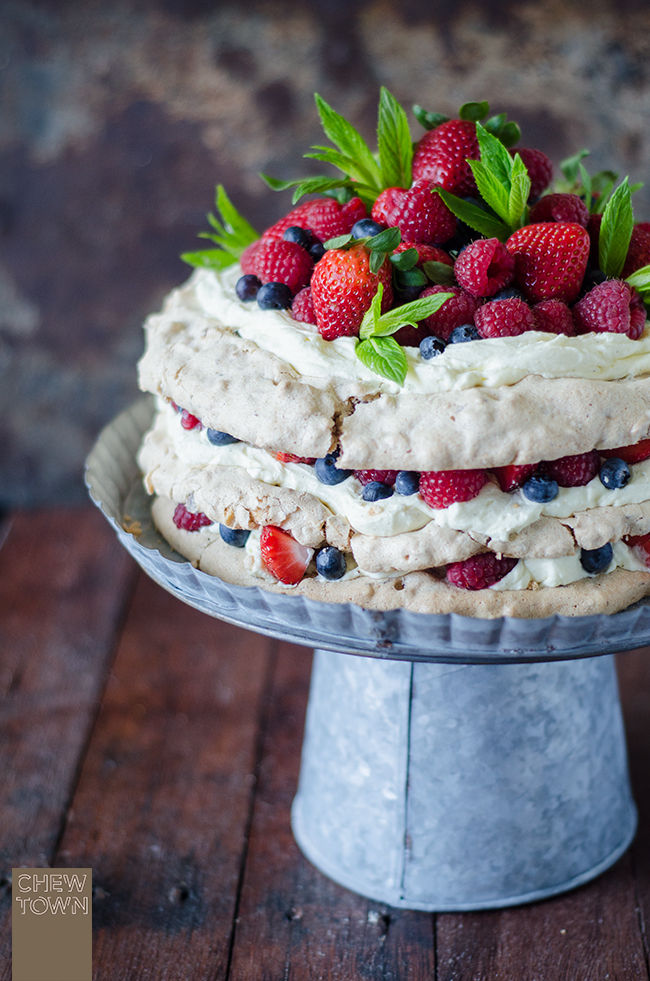 Roast hazelnuts then rub in tea towel until skins are mostly removed. Chop the hazelnuts coarsely and set aside.

Keep the egg whites at room temp. Whisk eggs until stiff peaks form then add the caster sugar a little at a time and continue to whisk until mixture is glossy. Open the vanilla bean in half, remove the seeds with the tip of a knife and add to the egg whites. Add the hazelnuts and cinnamon then mix everything together gently till combined.

Preheat oven to 180° Celsius. Take three pizza trays (or similar sized baking trays) and line with baking paper. Taking a round plate the same size as you would like to make the meringue layers to be, lay it on each piece of baking paper and trace around the plate with a permanent marker. Turn the baking paper over so the ink is on the bottom but still can be seen from the top.

Separate the mixture into three and place each portion on the centre of each circle. Gently spread the meringue out till it reaches the edge of the circle. Place each tray into the oven and bake for 25-30 minutes. The cooking must be done in the absence of moisture so leave the oven door open slightly, wedging the corner of the door open with the base of a wooden spoon.

Remove from oven and cool meringue circles completely (you can make these and leave overnight to cool).