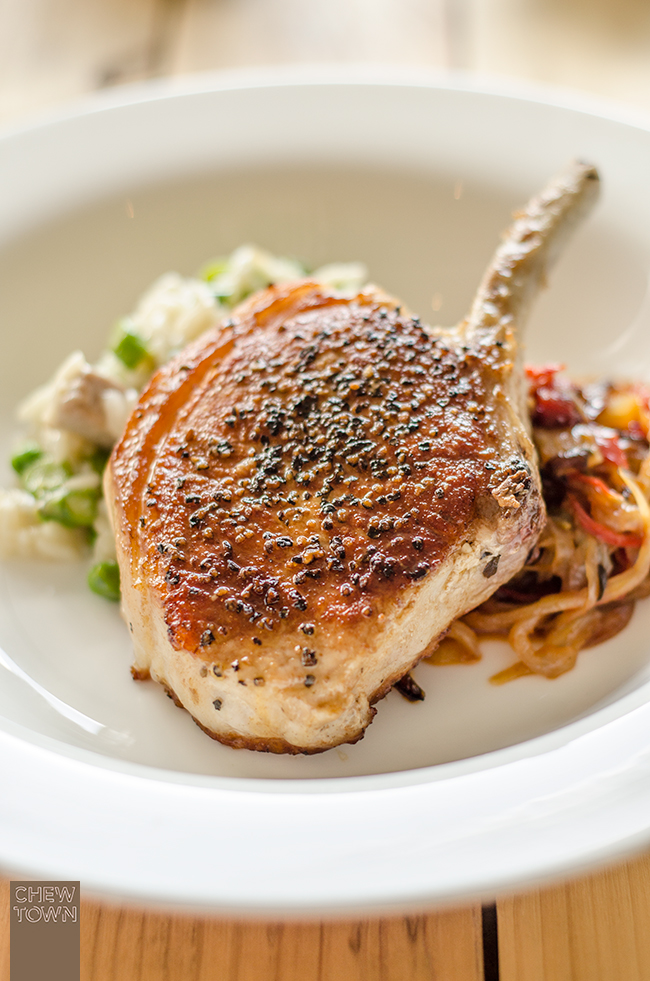 If you are a meat eater in today’s society, it is easier to make food choices based on where your meat comes from and how it is raised – and don’t you think we have a responsibility to understand how and where our meat is produced? Sure, It is quick and easy to purchase that cut of meat from the supermarket, but if you are looking for the best flavour, then head to the butcher and buy meat from the producers that are doing all they can to ensure the animal has had a stress free life so that your eating experience is better.

For the last two years I have been working with Murray Valley Pork to bring you more pork recipes on Chew Town. In using their pork products over this time the quality of the pork has been exemplary, so when I was recently invited to join a small group of media and travel to Albury with chef Manu Fieldel to see first hand the pork production, animal welfare initiatives and product innovation at the Rivalea farms, I just had to go. I have always wanted Chew Town to be full of information as well as recipes and where better to get the information, then direct from the source. 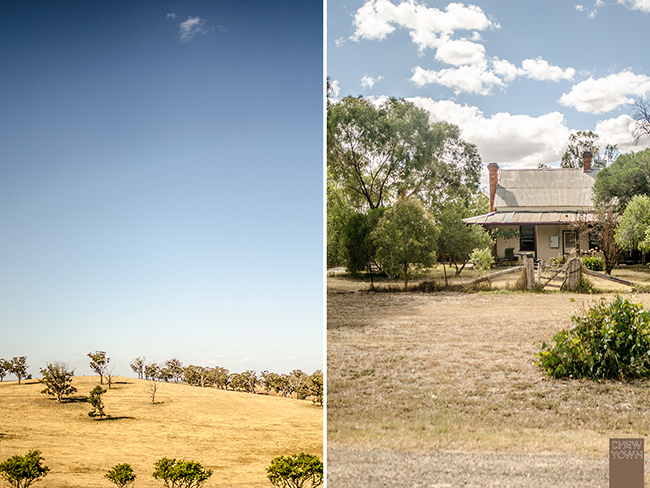 Rivalea (who produce Murray Valley Pork) are a large and impressive operation. They are the largest pork producer in Australia providing 18% of pork production which equates to over 800,000 pigs each year. As well as pork production, they manufacture grain and stock feed and manage their own pork processing and packaging across a number of farms and sites. All this so that they can control every single aspect of the pork production process to provide the best quality pork. Visiting the farm was an incredible experience and Rivalea opened the doors pretty wide to us to show us through their operation.

Rivalea are proactive in driving the industry to remove gestation stalls for pregnant sows and from 2013 all sows have been housed in large groups which ensures that sows are able to perform social behaviours and they are able to move around their pen.  This was the first area we visited with the sows all together in one large space with pockets where sows can relax unhindered by other pregnant sows – who apparently get quite aggressive.

We then were taken extensively through the farrowing sections of the farm (the birthing pens). With Rivalea at the forefront of animal welfare in the industry, Dr Rebecca Morrison, Animal Welfare Programs Manager, is currently trialling a number of different farrowing options and configurations with the team to ensure a better life for both the sow and piglets while still remaining commercially viable. It was great to talk through that process with Rebecca and understand that their trials consist of a number of different options taken from around the world.

Lastly a trip to the eco sheds were in order where we were greeting by pigs running around together in large groups. When they saw us they ran over to say hello and were clearly loving the attention. Pig enrichment is an important factor in production because giving them a community and something to do while they are growing keeps them relaxed and happy.

I was struck most by their personalities. Seeing so many pigs together in one location gave me a real sense of how intelligent pigs are but most importantly how different they all are. It has given me a greater sense of appreciation for the pork I have eaten since visiting the farm. 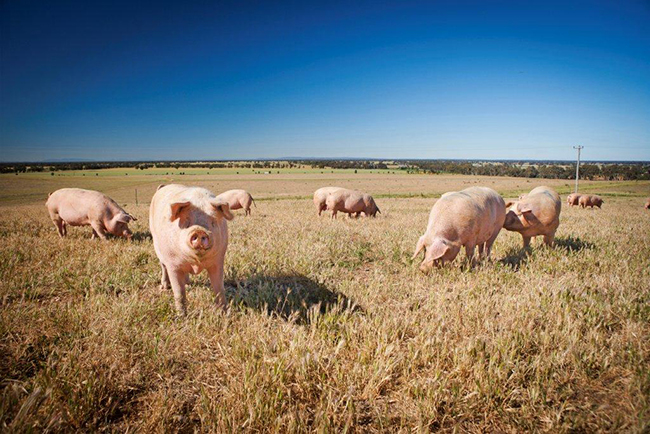 Following the farm visit, we had a very interesting round table discussion with Production Officer, Amy Lealiifano, who works on the meat science side of Pork Production. This is the area of the business that is responsible for the genetics related to the nucleus herd, testing the pork production quality against competitors and developing the final pork products provided to the consumer. It is important to note that the final product we are provided with is as a result of consumer demand. “Quality” is both objective (the measured meat quality by the producer) and subjective (the eating quality and experience for the consumer).

Australia’s consumer demand for an incredibly lean pork meat has meant that the majority of pork produced in Australia now does have some sort of moisture infusion added before it gets to you because with the fat bred out of the flesh, the moisture that comes from the fat when cooking it has gone. Given we are okay with fat marbling in our beef, why can’t we all get used to a little fat marbling in our pork I wonder? 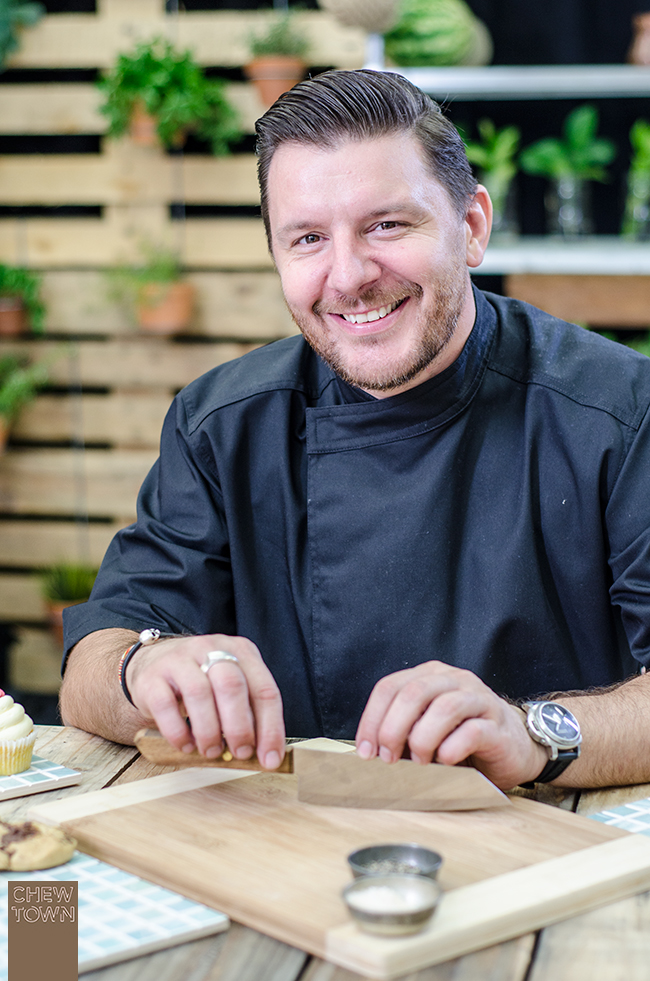 We were joined by Manu Feildel (chef and co-host of My Kitchen Rules) for our visit to Albury, and as well as coming with us to the farm, he also conducted a rather hysterical cooking class (more on that later) and joined us for lunch and dinner. 2015 marks Manu’s third year as ambassador for Murray Valley Pork and he is such a wonderful ambassador. I’m not one for ‘celebrity’ and instead take all people on face value of who they are when I meet them. After sitting next to him at dinner, and talking with him on route to the farm, I can safely say he is incredibly down to earth, honest, open and loves a good laugh – a hands down good guy with a cheeky gleam in his eye.

As a home cook, I got to sit down with Manu and ask him a few questions about pork and cooking it at home.

It wouldn’t be a food trip without getting our hands dirty and cooking ourselves, so we enjoyed a rather fun and unexpected cooking class with Manu where we made both a pork risotto, and this great recipe for Pork Cutlet with Fennel and Capsicum Jam.

With the excitement of us all cooking, just as we were getting ready to make the fennel and capsicum jam, a couple of our group (not me it should be noted) managed to set pans alight as olive oil went in to overheated pans. The fires were put out quickly by Manu but the fire alarms were set off and could only be turned off by the local fire department so after a good laugh and a shot for the local Albury paper (it made front page the next day) we continued on.

This really is a wonderful recipe to make and eat, the fennel and capsicum jam is the perfect accompaniment to the pork cutlet which was firm, juicy and full of flavour – and its all cooked in the one pan… so less washing up.

To make the jam, heat a little olive oil in large frying pan, then add the fennel, onion and capsicum. Season with salt and pepper, add the sugar and saute over medium high heat for 4-5 minutes until soft and coloured. Add the vinegar and let it bubble for a minute or until it has reduced and the vegetables are soft. Turn down the heat, add the tablespoon of olive oil and cook for another 2-3 minutes. Stir in the shredded sage and continue to cook for 30 seconds, then turn off the heat. Set aside in a bowl till ready to serve.

Wipe the pan clean to cook the pork. Using a sharp knife, make cuts into the fat of the cutlets, about 5mm deep and at 3-4cm intervals, making sure you don't cut into the meat. Season the meat really well on both sides. Place the frying pan over a high heat until hot and add a dash of oil. Add the cutlets, garlic and thyme and fry for 2-3 minutes until coloured. Turn and fry for a further 2-3 minutes on the other side, pushing the thyme under the cutlets and breaking up the garlic a little.

Towards the end of the cooking time, add butter to the pan and allow it to melt, once melted baste the chops with it as they are finishing to cook. Transfer the chops to a plate, and rest for 5 minutes, spooning over all the juices. Serve the chops on top of the jam with the resting juices.