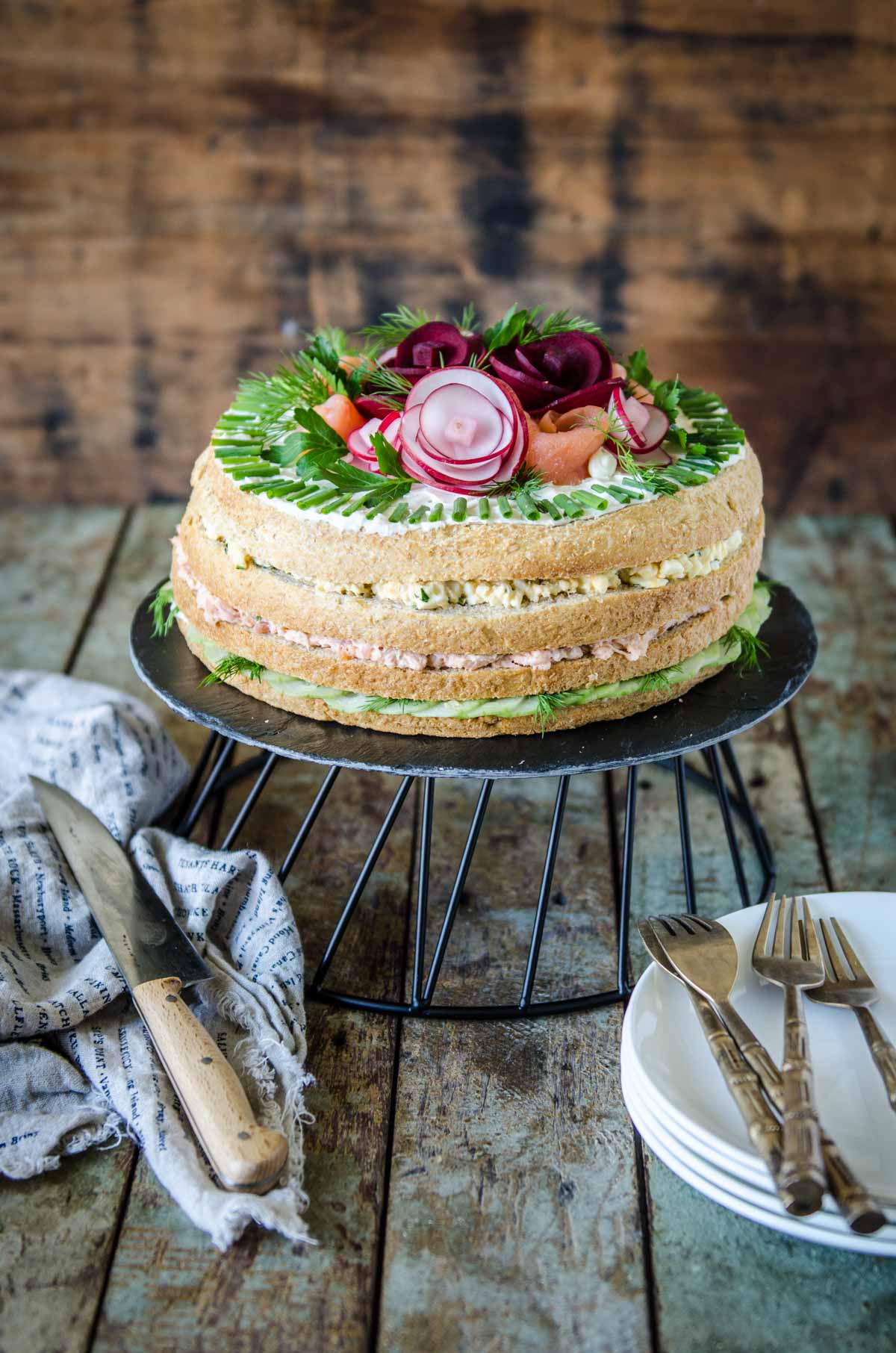 You only need two words to describe a smörgåstårta – sandwich cake. That’s really all there is to it. It is a Swedish savoury cake that uses wholemeal bread and sandwich fillings layered and decorated in a way that makes it looks like a cake.

Fascinated by the smörgåstårta from the moment I found out about it, a quick google image search yielded largely rather 80s looking sandwich cakes. When I began thinking about how I would interpret a smörgåstårta, it all came down to really making it look like a proper cake – and as pretty as possible.

So, rather than using sliced bread and making it in a square or rectangle shape as is often how it is done, I instead used a wonderful store bought bread mix (I used the Lauke brand Golden Wholemeal mix found in Australian supermarkets) and baked it in a spring form cake pan. By baking it in a cake pan, it allowed me to slice the loaf in layers, fill it like a layer cake, and decorate the top, all without the need to spread cream cheese around the sides to cover up bread slices. This allows the individual filling layers to be seen from the front of the cake which I love.

Making it this way also means that when you cut a piece, you can cut it like a slice and serve it like a sweet cake slice which looks great. 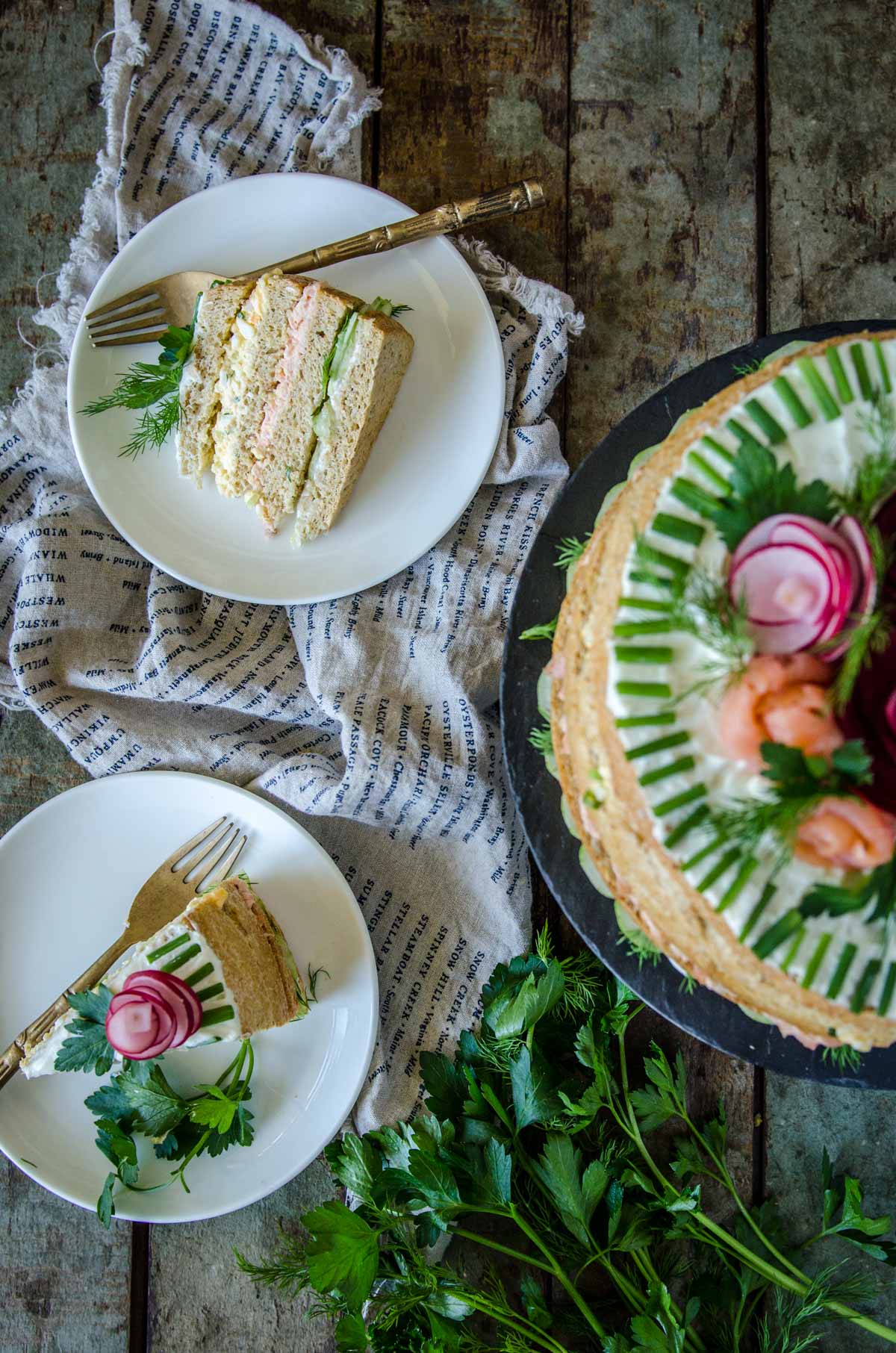 I’ve chosen to fill mine with three of my favourite sandwich fillings – smoked salmon rillette, egg salad, and cucumber and dill. You can fill yours with whatever you like, but just remember that you want to make sure all the fillings will taste great when eaten together. If you’re not a fan of smoked salmon, you could always replace that layer with a chicken sandwich filling (why not try my chicken Waldorf sandwich filling).

This smörgåstårta is deceptively easy because other than the wholemeal packet mix which needs to be baked, there is no other cooking involved! Just make the fillings, layer the cake and make the radish and beetroot flowers.

Don’t be worried about the flowers on top being complicated, they are easier than they look (I promise). I found a great youtube tutorial on how to make them and I couldn’t believe how well the flowers turned out with this method. I’ve actually been making flowers like this ever since for garnishes because they look so great. The link to the youtube video on how to make them is HERE and I made it even quicker by using a mandolin to cut the beetroot and radish slices (instead of by hand) which speeds up the process considerably.

So, the next time you’re having people over for brunch or lunch, or even headed out to a picnic, why not make one of these instead and watch your friend’s faces light up with joy when they realise what you’ve made. 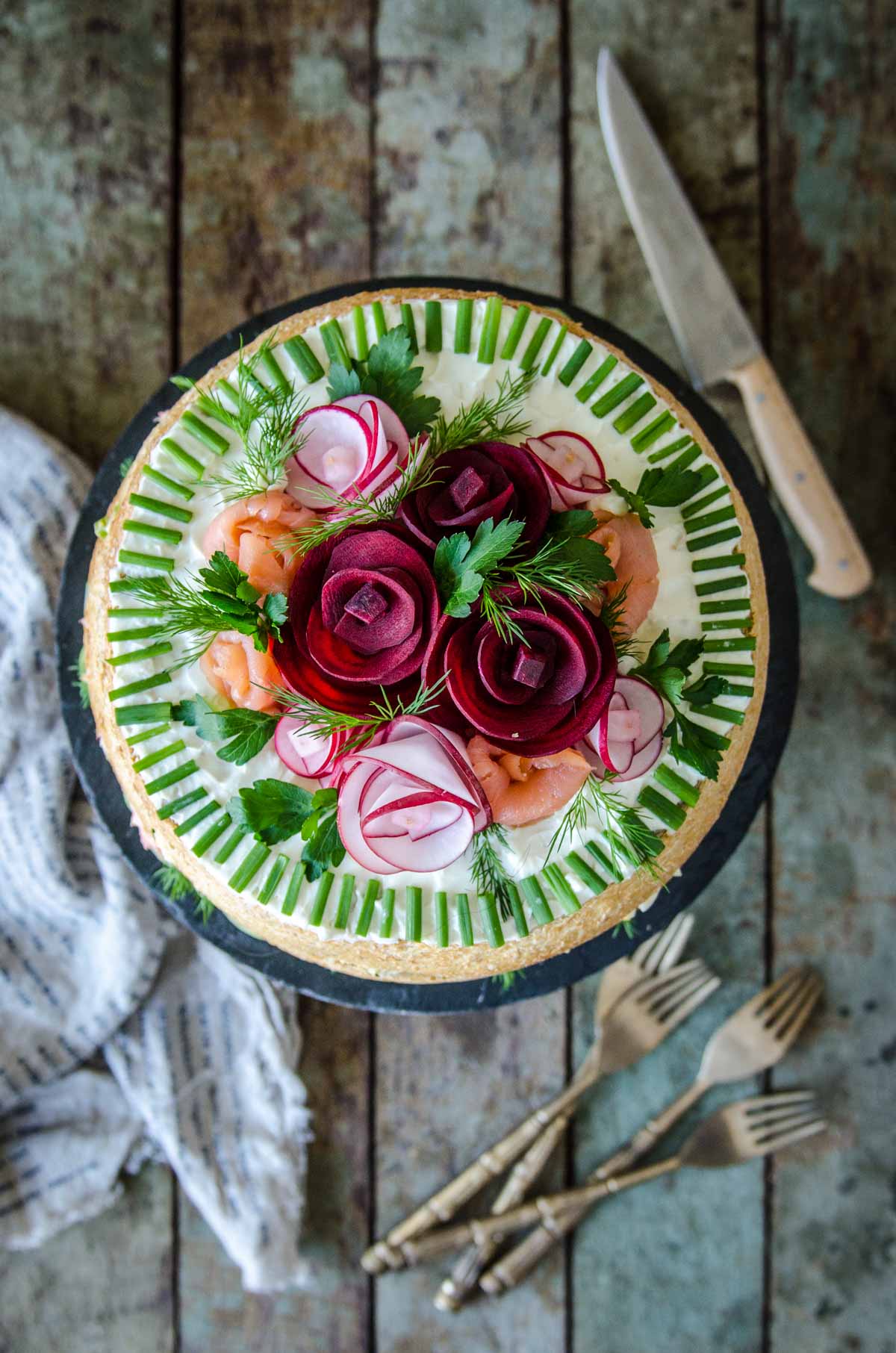 The night before you are wanting to make and serve the smörgåstårta, you will need to bake the bread. Using a wholemeal packet mix, bake it as per the packet instructions, but instead of using a bread tin for the dough, use a springform cake pan. Once cooked as per instructions, allow it to cool completely overnight.

The next day, prepare your fillings in this order. Start with the smoked salmon rillette layer. Place all ingredients in a small bowl, mixing well with a fork (or whisk) until well combined, then set aside in the refrigerator.

Make the egg salad filling by combining all the ingredients in another small bowl, mashing the eggs well with a fork to ensure it breaks up and then mixing until ingredients are completely combined. Refrigerate.

Take your wholemeal bread loaf that has been baked in the cake tin and level off the top. Using a bread knife, gently cut the loaf horizontally into 4 layers. Place the bottom layer on a serving stand and prepare the cucumber filling. Spread the base with cream cheese and top with cucumber slices slightly overlapping each other. Top with fresh dill and sea salt (to taste) then add the second layer of bread.

To garnish, roll smoked salmon pieces into flowers, add beetroot and radish flowers, garnish with fresh dill and parsley, then lay chive lengths around the outside top to finish. Refrigerate until ready to serve.

Any leftover cake will last 3-5 days if stored in an airtight container.

* I used the Lauke brand Golden Wholemeal packet mix found in Australian supermarkets
** Japanese Kewpie mayonnaise isn't as acidic as regular mayo, but you can use regular if you prefer
*** The tutorial I used to make the radish and beetroot flowers can be found here. 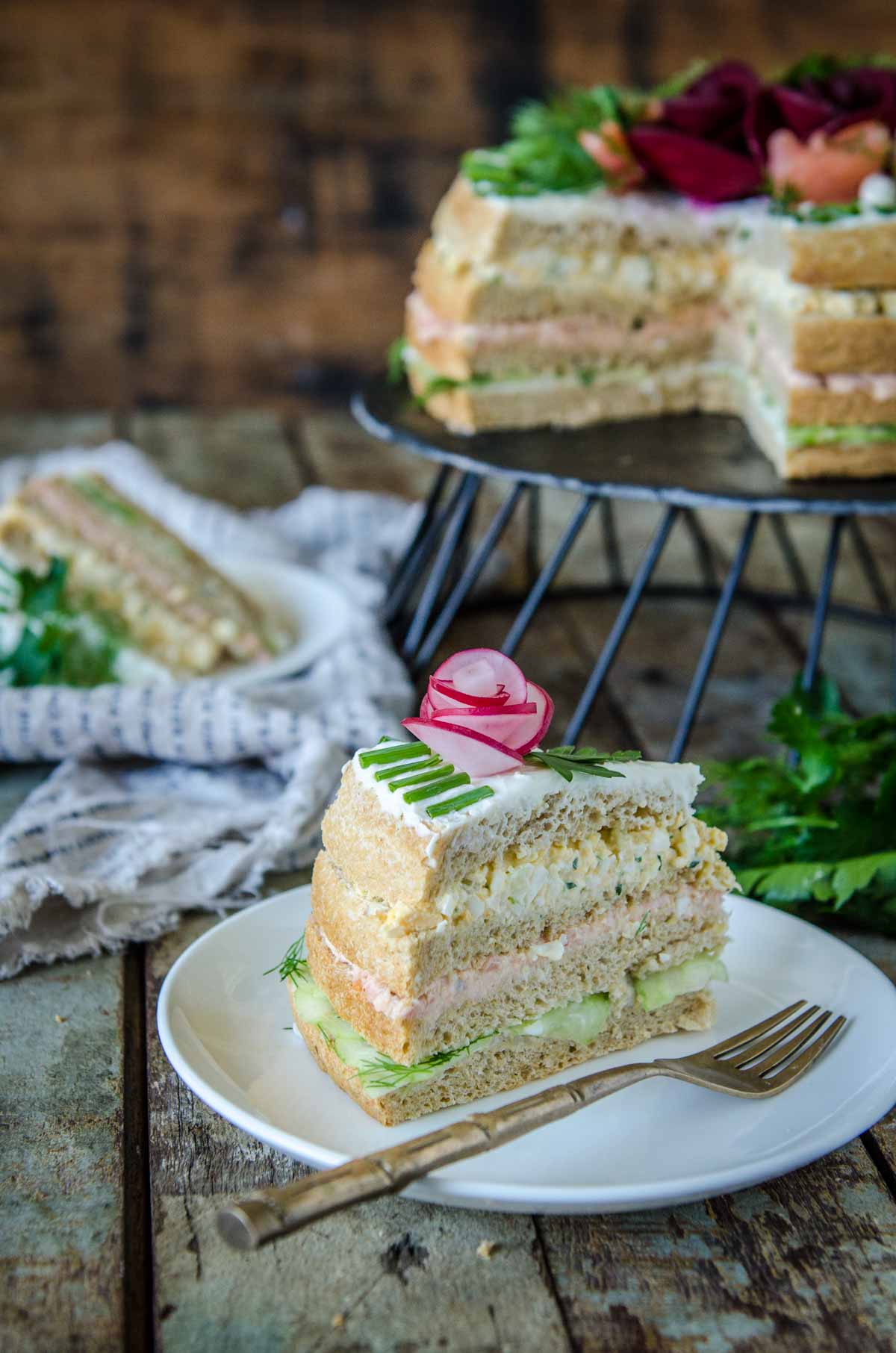