Once a month Scotty’s mum and I have Ikebana classes (Japanese floral arranging). It’s something both of us wanted to do for a little while and last year I came across Megumi Bennett – a Japanese bonsai and ikebana specialist from Bonsai Art – who runs ikebana classes from the studio at her Bonsai shop in Terrey Hills.

Last weekend we had to bring unusual items for our arrangement and after an inspired idea to visit the growers market, I found some beautiful deep purple artichokes that worked beautifully in my arrangement (see above).

Each week after Megumi has worked with us on our arrangements, I usually come home and put it together again to adorn Scotty’s home for the next week. Last week after arriving home from class I decided that instead of re-doing the arrangement, we would instead eat the artichokes!

People don’t often know what to do with fresh artichokes. I think its because unless you know how to prepare them, you can have an awful experience with tough, chewy and spiky leaves.

My mother has made stuffed artichokes for as long as I can remember. It is one of my favourite dishes she makes and I often request it when I am back home in Perth.

Having fresh artichokes was too much to resist, so the moment I got home I began prepping the artichokes for stuffing.

The most important part of this dish is the preparation of the artichokes. The first step is to remove the stalk so that the artichokes sit flat. You will then need to pull off a few rows of the outer leaves. These are usually the toughest leaves and won’t soften entirely during the cooking process. As we will be stuffing them, we need to then cut the tops off them so that we can open them out in preparation for the stuffing.

Place the prepared artichokes in a large bowl of water with the juice of half a lemon and a plate on top to keep the artichokes submerged. This will keep the artichokes moist and prevent them from discolouring while you prepare the stuffing, the acid will also start softening the leaves. 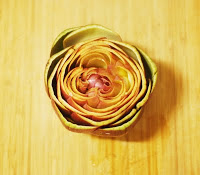 To make the stuffing, you will need to have roughly 3 cups of breadcrumbs. Store bought breadcrumbs will not work so you will need to have some stale bread handy and make your own (as a tip, you can freeze breadcrumbs so whenever you have stale bread it can be turned into breadcrumbs and popped in the freezer until you need to use it). Place your breadcrumbs in a large bowl and add your romano cheese, parsley, garlic, salt and pepper and one egg. You want the egg to only just bring the stuffing together as it shouldn’t be too wet. Should your ingredients not come together with one egg, add another.

Remove an artichoke from the water and shake the water loose. Holding it in two hands, gently open out the leaves with your thumbs (it should look like the image above). Once open, grab small handfuls of the stuffing and push into the centre of the artichoke and between the leaves. The more stuffing you have in each artichoke, the tastier it will be. For me, the best bit about eating it is finding little pieces of stuffing between the outer leaves as you work your way to the heart. Stuff all remaining artichokes.

Place your artichokes in a large pot with one inch of water covering the bottom, a swig of olive oil and a garlic clove cut in half. If you have any remaining stuffing roll it into small balls and add them to the pot.

Put the pot on the stove on a high heat and bring the water to the boil. Reduce heat, cover and simmer for 30 – 40 minutes until the water has evaporated from the pot.

When you eat the artichokes you will find the leaves soften as you eat through the artichoke. For the outer leaves you run them through your teeth and discard the remains, about two rows in you’ll be able to eat them in their entirity. 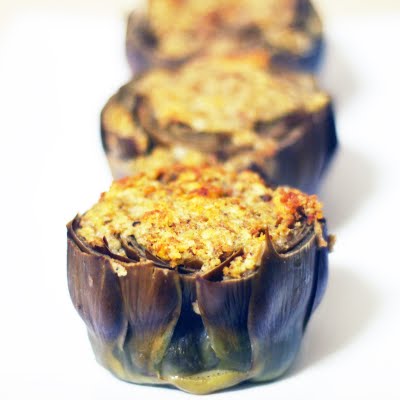