The last few weekends when deciding what to cook, I’ve considered making involtini (rolls of thinly sliced veal, pork, chicken or fish cooked with a stuffing) but for some reason or other it wasn’t the right time to make them.

Yesterday, Scotty was super tired and spent the afternoon napping, so I thought I would sort dinner out and couldn’t see any reason to put off cooking involtini any longer. So leaving Scotty napping on the couch I headed to the supermarket.

Even though this has nothing to do with the meal I cooked last night, I want to take some time out of this post to make a recommendation to people regarding supermarkets and early Saturday evenings – whatever you do, DO NOT go at this time. Firstly, mothers have spent the day there shopping for their 4 strapping lads and have left a wake of destruction and desolation in their paths so the supermarket hasn’t had a chance to refill and you are left looking at a half empty meat section with none of the best cuts. Secondly, those mothers with young children who, for whatever reason, were unable to get there during the day, are there in droves early evening with screaming children throwing tantrums in the aisles when not allowed to get the sweetie they so desire.

Anyway, I digress. After arriving back from the supermarket already having to have made a significant modification to my dish (turning veal involtini into pork involtini) I got to work. Wanting to add as much flavour as possible I decided to fill my involtini with the following:

I wanted to serve the involtini with a sauce and found a great wild mushroom marsala sauce recipe that would work perfectly with the pork. To complement and finish the dish, I served some asparagus found at the farmers market yesterday morning and light and fluffy mashed potato.

Marsala wine comes from the Marsala region in Sicily and is a fortified wine used in both savoury and sweet dishes. It has a distinct flavour and is better known for its use in Italian dishes, specifically Scallopini Marsala.

This dish turned out perfectly with the involtini remaining tightly rolled when cooked and the marsala sauce complementing the flavour of the filling in the involtini beautifully.

Saute the spinach in a fry pan with olive oil, crushed garlic and salt & pepper. Once wilted, fry for a further minute and remove.

Once the eggplant has released its fluid, pat dry and fry in a chargrill pan till dark then set aside.

Lay out a pork scallopini, season and place a slice of prosciutto, grilled eggplant, 1/2 handfull of spinach (squeezed of liquid) and slices of bocconcini on top. Carefully roll veal; closing the sides so ingredients do not fall out, and secure with skewers. Trim the skewer edges and cover the roll tightly in plastic wrap. Repeat with all remaining pork scallopini and then refrigerate for at least one hour. 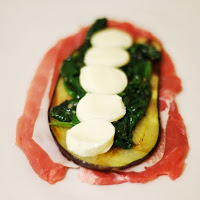 Preheat oven to 200 degrees. Remove pork involtini from the fridge and unwrap. Season veal with salt and pepper. Add oil to hot pan, saute pork until lightly golden. Remove excess oil and transfer pan to the oven to bake for 5 – 7 minutes.

Place the pan back on the stove; add butter, mushrooms and shallots and saute for 2-3 minutes. Then, add Marsala wine and beef broth. Turn pork over, reduce until sauce is slightly thickened.

Remove pork from sauce and allow to rest a few minutes. Carefully slice pork and serve on a bed of mash and steamed asparagus then pour sauce over. 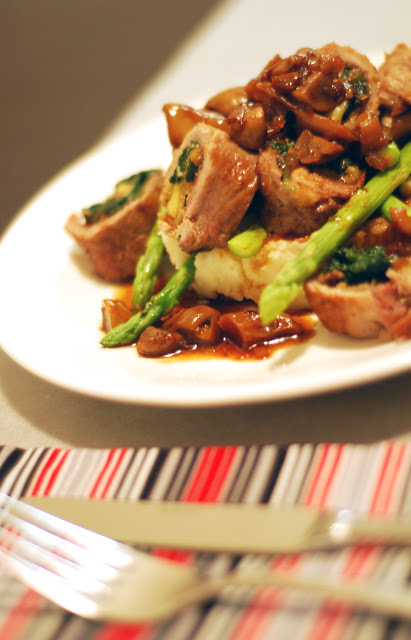