While not being Greek, my Italian features often have me misrepresented as Greek to other Greek people. Never was this more apparent than Easter Saturday (Christian Easter that is) when I explained to the shopkeepers in the local area that I was buying food for my Easter Sunday lunch. Most of them would look at me and say “But Easter is NEXT weekend” – I then had to laugh, shrug and say “but I’m Italian not Greek”, which would then inspire one of those Oh… you aren’t one of us, you are one of them looks. Luckily, while there is an extremely large Greek population in Scott’s area, they are all terribly lovely and are happy to help a little Italian girl who needs to find her magic ingredient of fresh unsalted pistachios for her Christian Easter Sunday lunch.

In acknowledgment of the lovely Greek community in the surrounding area (and their excellent produce) and Othordox Easter yesterday, I knew I wanted to try my hand at Greek mezés for dinner. Besides, we had just watched the Naxos episode of My Greek Kitchen, and I just had to try my hand at making Dolmades as soon as possible!

In Greece and Cyprus, mezé, mezés, or mezédhes (plural) are small dishes, hot or cold, spicy or savory served as lunch or dinner.

After a few minutes spent looking at mezé recipes online, I realised that there were a plethora to choose from. It was on the first website where I found two brilliant recipes to try in addition to the Dolmades – Spinach and Fetta Patties, and Grilled Red Pepper Wrapped Haloumi.

I had all three recipes going at the same time (which I have become very adept at lately) and while the flavour profile was somewhat familiar being Mediterranean – it was extremely different to Italian and I loved it! All three dishes were spectacular and Scotty and I had a really tough time figuring out which was our favourite.

Now, a little note for those of you non-Greeks who have only eaten dolmades out of a can: nothing… absolutely NOTHING tastes better than homemade dolmades fresh out of the oven! 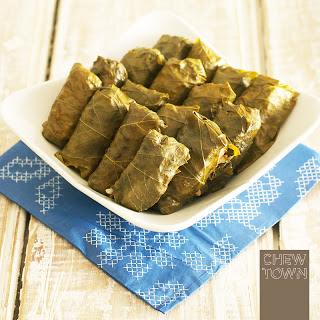 In a shallow pan, gently fry the onion in a little olive oil until transparent. Add the chopped tomatoes then salt, pepper, cinnamon, dried mint, parsley and mix well.

Add the pork mince to the mixture and cook until browned (the pork will continue to cook once the dolmades are in the oven) then add the juice of 1/2 lemon and stir well to incorporate. To the mixture add the rice and stir well until combined. Once well mixed, remove from heat and cool until mixture can be handled (like the pork, the rice will cook within the dolmades in the oven).

Soak vine leaves in water to remove the saltiness of the brine then place 1 level teaspoon of the mixture in the centre of each leaf and fold the leaf to make a small rectangular package. Place the dolmades next to each other in a glass or ceramic baking dish and when you have completed one layer, make another layer of dolmades on top of them and then finally a third layer (if the dish allows it) and squeeze 1/2 lemon over the dolmades. Add the remaining vine leaves in a layer on top of the dolmades and place a heavy plate over the top to weigh them down.

To the dish, add boiling water until it touches the rim of the plate and cover the top of the dish with alfoil. Put into a preheated oven at 180 degrees Celsius and cook for 60 minutes. Remove dolmades from the oven and serve. 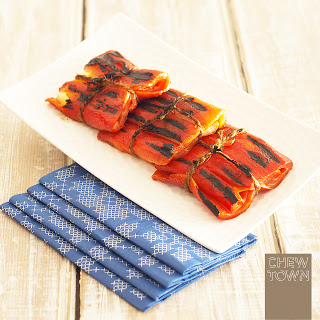 Grill or roast the capsicum whole until they begin to soften and blacken slightly. Make sure you dont over cook them – they need to be soft enough to wrap the cheese but not too soft so that they fall apart.

Once cool, skin the peppers and make one slice down each side and open out, cutting off the top and bottom so that you have a strip of capsicum. Put a slice of haloumi in the center of each strip and sprinkle over some lemon zest and juice, then divide the chilli, oregano and olive between them, and roll the red pepper around the halloumi. Once rolled secure with kitchen string soaked in water.

Cook the parcels either on a preheated barbeque grill or in a griddle pan on the cooktop. Cook the red peppers on both sides for 5 minutes or until they are starting to char and the cheese is softening and browning at the ends (keep an eye on the string as it could burn off). 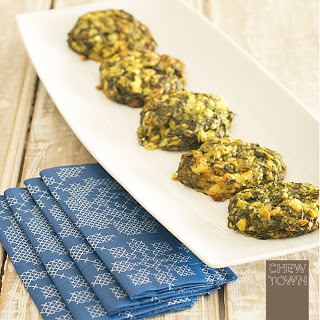 Gently simmer the spring onions and leek in 3 tablespoons of water for 5 minutes, to soften them. Drain them and let them cool.

Put the spinach in a mixing bowl, squeeze well with your hands and then drain off the liquid that has come out. Add all the ingredients to the mixing bowl – apart from 1 tablespoon of oil – along with the onions and leek.

Mix them well and add salt, but be careful not to make it too salty, as feta cheese is already quite salty. Grease a shallow oven dish with the remaining tablespoon of oil. Form the mixture into round patty shapes – 15cm diameter, 4cm height – and place them in an oven dish. Make sure you leave some space between them as they will spread slightly as they are cooking. Bake in a preheated oven at 200 degrees Celsius for about 45 minutes. 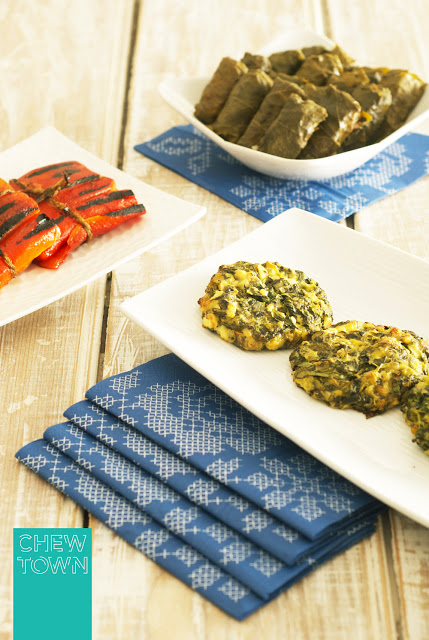